The feature race on the Friday of Arkansas Derby week is the $500,000 Apple Blossom Handicap (G1), for older fillies and mares going 1 1/16 miles. A field of 7 went to post before 23,111 fans at Oaklawn, with Grace Hall sent off as the even-money choice off a third place finish in the Sabin (G3). In to challenge her included 3-1 second choice Don't Tell Sophia, second in the Azeri (G3) last out, and 7-2 third choice Summer Applause, winner of the Top Flight (G2).

Also check out Overanalyze winning the Arkansas Derby and Cyber Secret winning the Oaklawn Handicap during the Racing Festival of the South at Oaklawn. 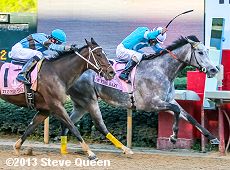 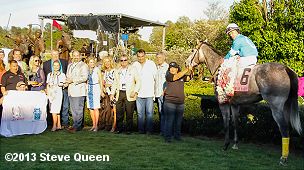 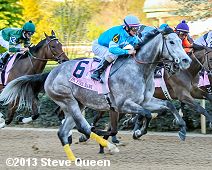 Left: On Fire Baby in the winner's circle. Winning owner Anita Cauley said, "I'm really, really proud. I needed her to act like a racehorse today. I didn't necessarily need the win. This was icing on the cake. We want to have her around for a while."

Right: On Fire Baby leads first time by. Jockey Joe Johnson said, "We always thought she had potential. Now she is running to it. This win today gave me a thrill, not so much for me but for Anita and Red Dog." 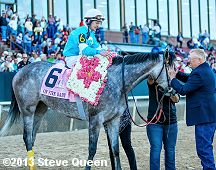 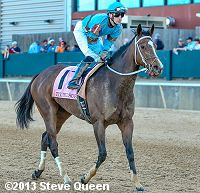 Left: Trainer Gary "Red Dog" Hartlage hugs On Fire Baby after the race. Hartlage said, "This is the best she's ever looked in her life. She's picked up 150 lb since last year. She's so relaxed. She's really matured. She's the best horse I've ever had and I've been training 40 years. She's something special. Joe rode one hell of a race. It doesn't get much better than that. He's the most underrated rider there is."

Right: Second place finisher Tiz Miz Sue returns after the race. Jockey Joe Rocco Jr. said, "It was a good trip. I was able to sit on her and wait to angle out. It seems like the rail's been dead so I didn't want to drop her over there. She gave me a good run." 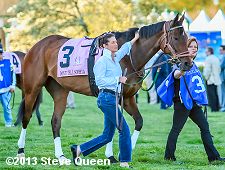 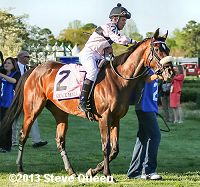 Left: Third place finisher Don't Tell Sophia in the walking ring before the race. Jockey Robby Albarado said, "I had no problem getting by the first two horses (Grace Hall and Summer Applause) and I thought my plan was working at the 3/8 pole. I didn't want to underestimate the winner, but I kept hoping she'd get tired. She's really nice."

Right: Last place finisher and beaten favorite Grace Hall in the walking ring. Carol Fisher, assistant to trainer Tony Dutrow said, "I thought we were home free around the turn, but it looks like she isn't trying like the Grace Hall we know. We've just got to go back and regroup." 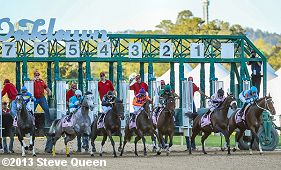 The horses break from the gate for the Apple Blossom. 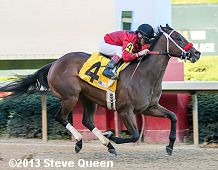 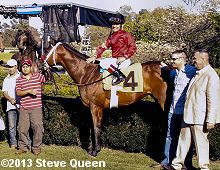 The $75,000 Instant Racing Stakes featured a field of 8 three-year-old fillies sprinting 6 furlongs. Cruzette was the 2-1 favorite over 3-1 American Sugar and 9-2 Blueeyesintherein.

Ile St. Molly went to the lead exiting the chute and she set fractions of 22.57 and 46.61 while pressed by Cruzette. On the turn the two pacesetters tired as American Sugar moved up to take the lead through 5/8 in 58.86, but Blueeyesintherein, 5th early, came through on the rail to win by 3 3/4 lengths in 1:10.76. It was just a neck back to American Sugar third, while favorite Cruzette checked in sixth.

Jockey Jon Court said, "She was really ready. She shot right up the inside like a pro."