The $300,000 Coolmore Lexington Stakes (G2) at Keeneland Race Course is realistically the final prep for the Kentucky Derby, being run 2 weeks before the first Saturday in May. A field of 11 three-year-olds went to post in this 1 1/16 mile trip over the Polytrack before a crowd of 33,680, the second largest in Keeneland history. Square Eddie, winner of the Breeders' Futurity last fall but second in the Breeders' Cup Juvenile and the San Rafael Stakes, was sent off as the 7-5 favorite over 6-1 second choice Omniscient, winner of two straight and making his stakes debut, and 7-1 third choice Masala, fourth in the Gotham at Aqueduct last out.

Jockey Alan Garcia sent 25-1 longshot Pitched Perfectly to the front and he was allowed an uncontested lead of as many as 1 1/2 lengths through fractions of 23.80, 47.90 and 1:12.56, with Masala and Omniscient battling for second. Square Eddie was slowest out of the gate and raced back in 10th early under new jockey Edgar Prado. Turning for home, Prado angled Square Eddie six wide to pass tiring horses, as the favorite easily took over the lead at the 3/16 marker and opened up a 1 1/2 length lead in midstretch through 1 mile in 1:37.28. However, he tired in the final furlong, as 15-1 Advice rallied from last early to win by 1 length over 16-1 Conservative in 1:43.33. It was another length back to Square Eddie third, and 3/4 more to Masala fourth. Eibar Coa aboard Masala claimed foul against Prado aboard Square Eddie for alleged interference at the top of the stretch but the claim was disallowed. 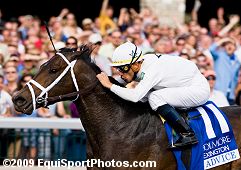 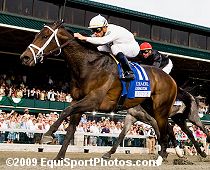 Close up view of Advice at the finish. Winning trainer Todd Pletcher said, "He's still kind of putting it all together.  I thought he was still just a touch green when he made the lead.  He's a horse that's shown a lot of ability. I think the smart thing to do is to see how he comes out of it and keep our options open. But he never gets tired. He has a lot of stamina. Two weeks (rest) is okay for him. We won't rule out (the Derby) but won't commit right now either."

Winning jockey Garrett Gomez said, "He (Advice) had some antics; at one time he lugged in, at one time he lugged out.  We were just trying to push all the right buttons and see if we could get him to run straight, and he did so willingly today. I actually had a good trip from the 11-hole. (Square Eddie) kind of got left (at the starting gate), it looked like. I just kind of clocked him the whole way and followed him from there. I just took my time with this horse, and he gave me real confidence". 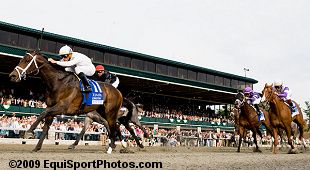 Wide view of the finish with Advice out front, second place Conservative behind him, and third place Square Eddie on the far right.

16-1 Conservative shot raced in 9th for the first 6 furlongs under new jockey Kent Desormeaux, then came seven wide into the stretch and chased the winner to the line. The Shug McGaughey trained son of Unbridled's Song improved his record to 2 wins, 3 seconds, and 0 thirds in 7 starts, earning $124,560 for owner-breeder Phipps Stable.

Square Eddie's jockey Edgar Prado said, "We just didn't get lucky today. He broke a little flat footed and I had to make a move and go wide because I didn't want to wait for something to open up on the inside.  He made a great run and was trying really hard.  He gave a 110 percent today." His trainer Doug O'Neill added, "I have to talk to the Reddams (owners).  I haven't had a chance to speak to Paul yet, but I'm very proud of the effort. He ran a dynamite race.  With a clean break, I think he'd be right there. I would think we would go (to the Derby)."