The feature race on Sunday at Saratoga Race Course was the $300,000 Lake Placid Stakes (G2) for 3-year-old fillies going 1 1/8 miles on the inner turf course. The day started cloudy with temperatures in the mid 80's but the temperature dropped to the mid 70's and rain fell about halfway through the race card, with 25,158 fans in attendance. 2015 Canadian Horse of the Year Catch a Glimpse was sent off as the 3-5 favorite in the field of 6, undefeated in 8 straight starts including the Belmont Oaks (G1) last out. In to challenge her included 7-4 second choice Time and Motion, second in the Belmont Oaks last out, and 9-1 third choice Elysea's World, second in the Lake George (G2). 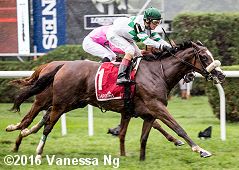 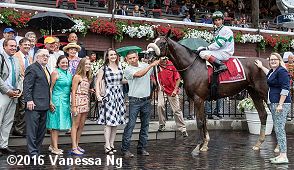 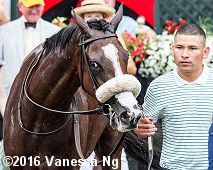 Left: Time and Motion in the winner's circle. Winning trainer Jimmy Toner said, "At the 1/16 pole, I didn't think we were getting by (Catch a Glimpse) but she doesn't quit. Catch a Glimpse is a tough filly. I didn't think we'd get by her but she did. Johnny said she slid out a bit at the quarter pole and was able to get her traction back in the stretch. We had to be close. Johnny rode a perfect race and did everything right. We had to keep her in contention. There's no way you're going to make up five or six lengths on a filly like Catch a Glimpse. She hits that turn and she takes off. We knew it and Johnny knew it. You have to be able to execute it and she was able to do it."

Right: Time and Motion heads back to the barn. 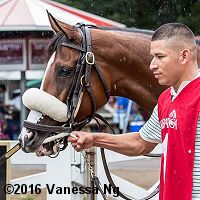 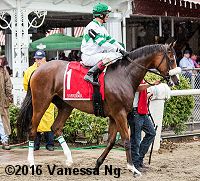 Left: Time and Motion in the paddock. Winning jockey John Velazquez said, "Today, I kept her on her tail (Catch A Glimpse). Wherever she went, I was going to keep her right on her tail. It was different story than last time when she was able to get away, but there was no rabbit in this race. The reason she spurted off a little bit is because she went to slip right at the quarter pole. It took five steps to get her back straight, but when I got her back together and she gained traction in the lane, she went away."

Right: Time and Motion heads out to the track before the race. 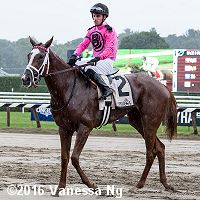 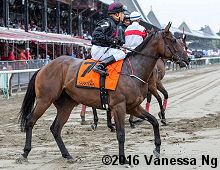 Left: Second place finisher and beaten favorite Catch a Glimpse returns after the race. Trainer Mark Casse said, "She ran well, I'm proud of her. She tries so hard and she runs so hard. Even Secretariat got beat here. It happens. A better filly beat her today. It's disappointing any time you lose, but she gave it her best. I'm disappointed but not upset. I thought she put it away. She did everything right today but win. We could go to Belmont and run against colts. We said all along that she likes Keeneland. We'll see. I'm not anxious yet to run her against older fillies. She may have one or two more starts this year, take a little break and get ready for next year."

Right: Third place finisher Diamond Fields heads out to the track before the race. The 23-1 shot rated 5th 5 lengths off the pace under Junior Alvarado, then passed tired horses to get third beaten 2 1/2 lengths. The Tommy Stack trainee improved her record to 1 win, 4 seconds, and 1 third in 10 starts, earning $86,559 for owner Mary Slack.