The $300,000 King Edward Breeders' Cup Stakes (G2) features older horses going 1 1/8 miles around one turn of the E.P. Taylor Turf Course at Woodbine Racetrack in Toronto. A field of nine went to post on Saturday afternoon, with Connaught Cup runner-up Society's Chairman sent off as the 2-1 favorite, despite just making his third lifetime start. Trained by Roger Attfield, owned by Charles Fipke, and ridden by Jono Jones, he is from the same connections of Queen's Plate winner Not Bourbon, and is by the same sire Not Impossible. In to challenge him were 3-1 second choice and William Farish homebred Royal Oath, fifth in the Connaught after shipping in from Dubai, and 7-2 third choice French Beret, third in the Connaught last out after finishing second in the Mervin Muniz at the Fair Grounds for owner-breeder Sam-Son Farm. Due to heavy rains the last couple of days, the course was rated yielding and the temporary rail was set 20 feet out.

20-1 Ice Bear battled on the front end with Society's Chairman down the long backstretch and around the turn, getting fractions of 24.45, 48.58, and 1:13.15 over the yielding course. Entering the stretch, Ice Bear continued to lead. With 3/16 to go, Royal Oath, who had raced in fifth early and came out 3 wide into the stretch, moved up to challenge the pacesetter, exchanging bumps through the final furlong, getting the mile in 1:37.02. Royal Oath fought off Ice Bear in the final strides to win by 1/2 a length in 1:39.67. It was another 1/2 length back to late-running 7-1 Seaside Retreat third. Favorite Society's Chairman was still close up in third at the 1/8 pole but stopped badly late and bore out at the 1/16 pole, finishing a disappointing seventh. 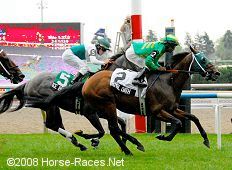 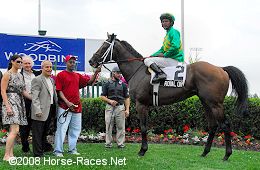 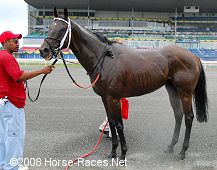 Left: Royal Oath in the winner's circle. Winning trainer Mark Casse said, "The Farish's decided to bring him over here earlier this spring and I'm glad they did, He came in a couple of days before the last race (Connaught) and he didn't have a great trip on the plane. The horse just looked flat to me. About a week ago, we worked him and I sent a text message to Bill (Farish Sr.) and I said, 'Okay, I just saw a good horse.' Luckily, he ran that way today."

Right: Royal Oath gets hosed off before heading to the barn. 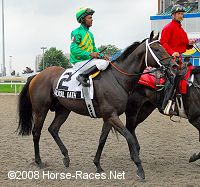 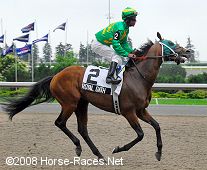 Left: Royal Oath returns after the race. Winning jockey Patrick Husbands said, ""Last time, he had a nice trip, but he didn't fire down the lane. In his last work, he was a different horse. I don't think it was the track last time. He just wasn't happy. Right now, he's a good horse."

Right: Royal Oath was a bit fracious in the post parade. 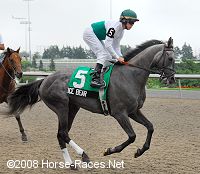 Second place finisher Ice Bear takes off in the post parade. His jockey Corey Fraser said, "He was very relaxed on the backside and I knew when we came for home they would have to have something behind me to catch him. I like being the underdog. This guy tried hard." 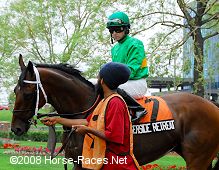 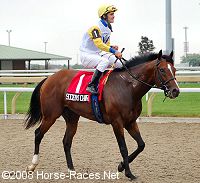 Left: Third place finisher Seaside Retreat in the paddock. The 7-1 fourth choice raced near the back of the field early under new rider Tyler Pizarro, came out at the 3/16 pole for running room and closed well to get third place beaten just a length. The son of King Cugat improved his record to 5 wins, 3 seconds, and 2 thirds in 17 starts for trainer Mark Casse, earning $659,111 for owner William Farish Jr.

Right: Seventh place finsher and beaten favorite Society's Chairman returns after the race. The 2-1 favorite pressed the pace in second for the first 7 furlongs under jockey Jono Jones, then tired badly inside the 1/8 pole to finish seventh. The Roger Attfield trainee has 2 wins and 1 second in 4 starts, with earnings of $79,476 for owners Charles Fipke and George Waud.