With just 2 weeks remaining in the Woodbine Thoroughbred season, there are few stakes opportunities left as many of the top stables have begun to ship south for the winter. The $175,000 Kennedy Road Stakes (G2) featured some of the top older male sprinters in Canada going 6 furlongs over the Tapeta main track. Conditions were typical for late November at the Toronto oval, with overcast skies and temperatures in the mid 40's. As expected, Pink Lloyd was sent off as the 3-5 favorite in the field of 7, undefeated since he finished 2nd in this race last year, and coming here off a 7 race win streak including the Vigil (G3) in July, the Kenora in August, and the Overskate last out. In to challenge him included 11-4 second choice Ikerrin Road, winner of the Bold Venture (G3) but 4th in the Nearctic (G1), and 8-1 third choice Tombelaine, 5th in the Play the King (G2) before shipping to Belmont where he was claimed for $100,000 in an optional claimer victory last out.

Jockey Jesse Campbell sent 23-1 Yorkton to the lead exiting the chute through an opening quarter in 22.37 while pressed by Pink Lloyd and Tombelaine. On the far turn, 22-1 Sweet Grass Creek, 4th early, moved up to challenge pinking his head in front through a half in 22.65. Entering the lane, jockey Eurico Rosa da Silva sent Pink Lloyd between Sweet Grass Creek and Tombelaine to gain the front through 5f in 56.43. Kept to task by Da Silva, Pink Lloyd drew off late to win by 2 1/4 lengths over late-running Ikerrin Road in 1:08.46, just 3/10 second off the track record. It was another 1 1/2 lengths back to 25-1 longest shot Majestic Slew third. 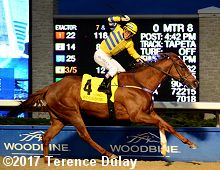 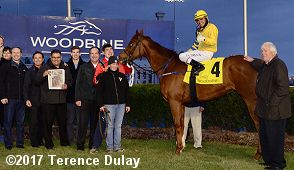 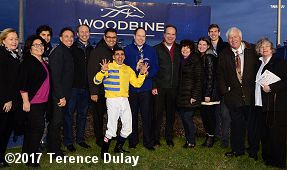 Left: Pink Lloyd in the winner's circle. Winning trainer Bob Tiller said, "He just won eight stakes in a row. What do you do for an encore here? He's an icon. He's just a really good horse. He just likes to run by horses. I was afraid of Vito (Armata)'s horse (Ikerrin Road) today and he had a real good shot at him and he just shook him off and away he went. We're so proud of this animal. We're so blessed to have him and I hope we can be around next year and have a lot more fun with him. This is the biggest thrill of my training career."

Right: The connections celebrate his 8th win in a row. He is believed to be the first horse to win 8 stakes in a row at Woodbine. The win completes a perfect 8 for 8 for 2017 and he should easily be voted the Sovereign Award for Champion Male Sprinter and possibly Canada's Horse of the Year. Pink Lloyd has a record of 11 wins, 1 second, and 0 thirds in 13 starts, earning $650,864 for owner Entourage Stable. 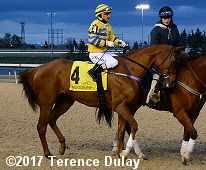 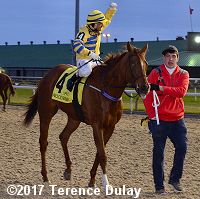 Left: Pink Lloyd in the post parade. Winning jockey Eurico Rosa da Silva said, "It was not the place I wanted to be (pressing the pace), I'll be honest with you. I thought I was going to be a little more behind the pace, but he brought me there. He was really, really easy. But there's always horses around him, he's an aggressive horse. In the turn, I could feel he had a lot of horse. When we turned for home, another horse just came out a little bit and gave him a little touch and he said, 'It's time for me to go,' and he just went on his own. He's a great horse and it's like a dream to ride a horse like this. I want to thank Bobby. We are here every day working so hard to ride a great horse like him. Thank you everybody, good luck to everybody!" 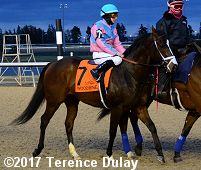 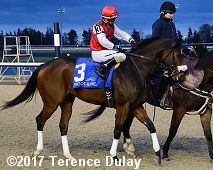 Left: Second place finisher Ikerrin Road in the post parade. The 11-4 second choice sat 5th early 2 lengths off the pace under David Moran, then rallied to get second beaten 2 1/4 lengths. The Vito Armata trainee improved his record to 8 wins, 3 seconds, and 2 thirds in 23 starts, earning $269,437 for owner Alpine Stable Ltd.

Right: Third place finisher Majestic Slew in the post parade. The 25-1 longest shot was 6th early 3 1/2 lengths off the lead under Rafael Hernandez, then rallied to get third beaten 3 3/4 lengths. The Mike De Paulo trainee improved his record to 6 wins, 7 seconds, and 6 thirds in 26 starts, earning $267,144 for owner Frank Russo.