With just 2 weeks remaining in the Woodbine Thoroughbred season, there are few stakes opportunities left as many of the top stables have begun to ship south for the winter. The $150,000 Kennedy Road Stakes (G3) on Saturday afternoon was the last graded stakes of the year in Canada. A field of 10 older horses went to post in this 6 furlong sprint over the main Polytrack surface, contested on a frigid, mostly cloudy day with temperatures in the low 20's. Storm Treasure, third in the Breeders' Cup Turf Sprint at Santa Anita in his last start, was sent off as the 9-4 favorite for trainer Steve Asmussen. In to challenge him included 4-1 second choice Just Rushing, winner of the Labeeb Stakes on the Woodbine turf last out, ad 5-1 third choice The Great Caruso, second by a nose in an allowance last out after finishing seventh in the Nearctic Stakes.

13-1 Main Executive and jockey Emile Ramsammy battled for the lead with 10-1 Rouse the Cat with regular rider Christopher VanHassel down the backstretch through an opening quarter mile of 22.26 and half in 44.65. Favorite Storm Treasure rated well off the pace in ninth early. Turning for home, Main Executive tired and faded to eventually finish last, as Rouse the Cat took over the lead at the 3/16 pole, getting 5 furlongs in 56.62. However, 17-1 Shadowless and new jockey Justin Stein, who raced in midpack fourth in traffic early, came through on the rail to take over the lead from Rouse the Cat late, holding him off to win by 1/2 a length in a time of 1:09.08. Favorite Storm Treasure put in a strong rally four wide under jockey Jim McAleney but could only manage third, a nose short of second money. 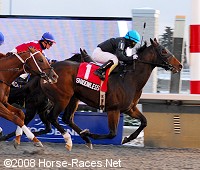 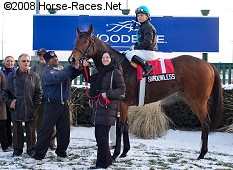 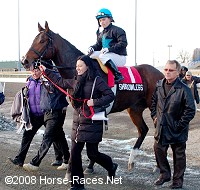 Left: Shadowless in the winner's circle.

Right: Shadowless heads to the winner's circle led by owner-breeder Heather Takahashi. Takahashi, celebrating her first stakes win as an owner, said, "It's an absolute thrill of a lifetime, a dream come true. I'm pinching myself. It's fantastic." Shadowless is the first horse she has ever bred or raced. 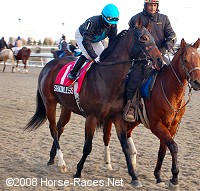 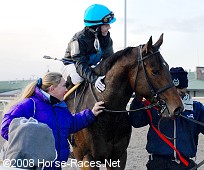 Right: Shadowless gets a pat from jockey Justin Stein after the race. Stein said, "He almost ran over the two horses in front of him. I just had to wait a little longer. I pulled the trigger and away he went." 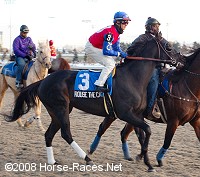 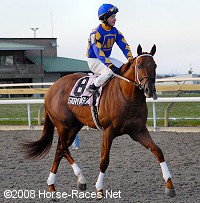 Left: Second place finisher Rouse the Cat in the post parade. The 10-1 sixth choice stalked the early pace down the backstretch under regular rider Christopher VanHassel, took over the lead when the pacesetter tired, but was passed by the winner with a furlong to go, finishing second beaten 1/2 a length. The Ollie L. Figgins III trained son of Sir Cat improved his record to 7 wins, 3 seconds, and 3 thirds in 18 starts, earning $311,300 for owner Ray M. Pennington III.

Right: Third place finisher and beaten favorite Storm Treasure returns after the race. The 9-4 favorite rated well off the pace in ninth down the backstretch under regular rider Jim McAleney, came four wide on the turn into the stretch to pass tiring horses, and rallied well to finish third, just a nose back of Rouse the Cat. The Steve Asmussen-trained son of Storm Boot improved his record to 5 wins, 9 seconds, and 5 thirds in 28 starts, earning $642,680 for owner Mike McCarty.