The $300,000 Gotham Stakes (G3) is the first major New York prep for the Kentucky Derby, and is worth 50 points to the winner as part of the Kentucky Derby Championship Series. Conditions on Long Island were typical for early March, with partly cloudy skies and temperatures in the mid 40's, and the main track rated fast. A field of 11 three-year-olds contested this 1 mile trip around one turn of the main track, with Mischievous Alex sent off as the 7-4 favorite off wins in the Parx Juvenile and the Swale (G3). In to challenge him included 7-2 second choice Attachment Rate, a maiden winner last out, and 4-1 third choice Untitled, 4th in the Swale then 2nd in an allowance.

Jockey Jorge Vargas sent 12-1 War Stopper to the lead exiting the chute through fractions of 23.54 and 47.26 while pressed by Mischievous Alex and stalked by Untitled. On the far turn War Stopper tired badly as Mischievous Alex inherited the lead through 3/4 in 1:12.50. Mischievous Alex opened up a 2 length lead over Untitled through 7f in 1:25.30. Kept to task by Kendrick Carmouche, Mischievous Alex held that advantage the rest of the way to win by 2 lengths in 1:38.80. It was a head back to late-running Attachment Rate third. 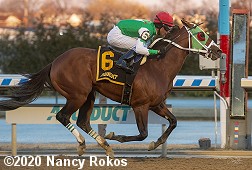 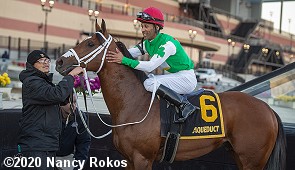 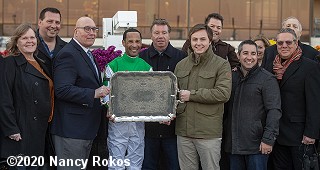 Left: Mischevious Alex in the winner's circle. Winning trainer John Servis said, "It was a great day for us. He handled the next step up really well and gave us a solid effort today. We'll see how he comes out of this and Chuck [Zacney, Cash is King] and the other partners and I will discuss what's next. Ever since we put the blinkers on him, everything that we've handed him, he has handled very well."

Right: Trophy presentation for the Gotham. Winning jockey Kendrick Carmouche said, "John pretty much told me this horse can do anything. He sits pretty good or can go to the lead. He told me the horse is a rocket out the gate, so the best thing that I can do is to take advantage. He left out of there running and I didn't want to panic. I wasn't in a rush. I thought I had the best horse in the race, so I wasn't in a hurry." 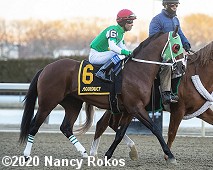 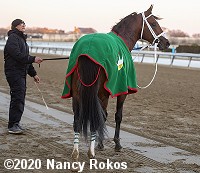 Left: Mischevious Alex in the post parade. Servis added, "We'll discuss (the Wood), but as long as he comes out of it well, I think it's worth taking a shot."

Right: Mischevious Alex heads back to the barn. Carmouche added, "I was pretty confident in my horse and John. He just told me to ride the way I feel and win the race. Congratulations to John Servis and Cash is King Stable. I guess they're on their way again to the big dance. A horse that's this good, you can do anything with them. They can be dynamic. He can be on the lead or sit off of it. The trainer's been there before and he knows how to get them ready." 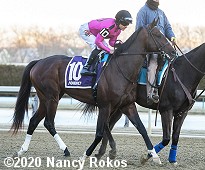 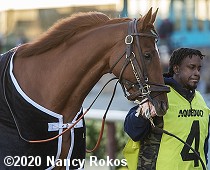 Left: Second place finisher Untitled in the post parade. Jockey Junior Alvarado said, "I thought he ran very well. We were a little bit wide, but we drew the 10 post, so we didn't have a lot of choices. He ran a great race. When I asked him, he gave me what he had, and he ran on to the wire. He held on pretty well for running three times in a month. If they want to run in the Wood Memorial, it will give him a chance to get strong again. The way he ran today, he should have no problem with two turns. He's a kind horse. He will do whatever you want."

Right: Third place finisher Attachment Rate walks over before the race. Jockey Luis Saez said, "I had a good trip. He broke well but I think more distance will be better for him. He was travelling pretty good but when we came to the top of the stretch he was a little intimidated because he was inside. But once he got clear he started running again. He's still young and improving. I think he will be all right."


A field of 8 older horses contested the $200,000 Tom Fool Handicap (G3) over 6 furlongs on the main track. Allen Jerkens (G1) and Toboggan (G3) winner Mind Control was sent off as the 7-5 favorite over 3-1 Happy Farm, 2nd in the Gravesend after winning the Fall Highweight Handicap (G3), and 4-1 Bon Raison, 5th in an allowance last out.

Jockey Jose Lezcano sent Happy Farm to the lead through fractions of 22.87 and 47.17 while pressed by 15-1 Wentz and stalked by 10-1 Wonderful Light. Turning for home Happy Farm opened up a 5 length lead through 5f in 58.19, but Mind Control, 6th early under Junior Alvarado after stumbling at the start, closed with a rush to win by 1 1/4 lengths in 1:10.88. It was another 2 lengths back to late-running Bon Raison third. 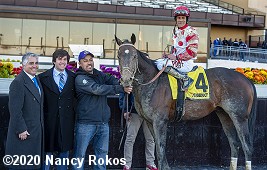 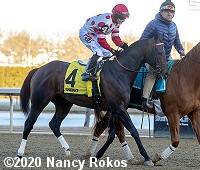 Left: Mind Control in the winner's circle. Winning trainer Gregg Sacco said, "He kind of saved the day. Today, I let Junior ride his race. I thought the outside horses would out-run him, but I didn't expect to be that far back. He's a special horse and he has some kick. We'll take it one race at a time, but we'll savor this win and it should set us up nicely for the Carter. He's like New York's darling horse and loves Aqueduct. These stakes are rich and deep in tradition. As a trainer, you dream of running in them. It's a special thing to win them. New York is the crčme de la crčme of racing. To compete and win at the highest level is special for our team."

Right: Mind Control in the post parade. Winning jockey Junior Alvarado said, "I was further back than I wanted to be, but he's an old pro and he knows where the wire is and when to put the run. As soon as I put him on the outside, past the 3/8 pole, he knew what was going on and started picking it up turning for home. I switched my stick to the left because it seemed like he responded to it. He was just flying. He was so strong at the end.  He wasn't moving forward as much as I wanted in the first part. I switched leads to my right and he started to get into his rhythm, then I switched back to the left. I was a little worried. I didn't want to be that far back. But he's an old pro and when he gave me that kick at the end, it was a hell of a kick. I knew I was up against it a little bit, but I knew I had the horse to do it." 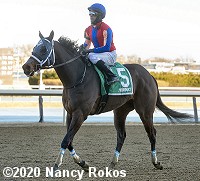 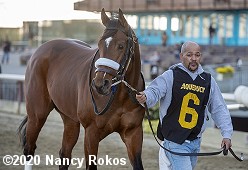 Left: Second place finisher Happy Farm returns after the race. Jockey Jose Lezcano said, "He gave me one of the best races he could run. The winner was very tough. But, [Happy Farm] ran hard and ran his race the whole way."


The distaff counterpart to the Gotham is the $250,000 Busher Invitational Stakes featuring a field of 7 three-year-old fillies also going 1 mile on the main track, worth 50 points to the winner as part of the Kentucky Oaks Championship Series. Demoiselle (G3) winner Lake Avenue was sent off as the 4-5 favorite over 3-1 Maedean, 2nd in the Demoiselle, and 7-2 Mo City, 2nd in the Gasparilla. 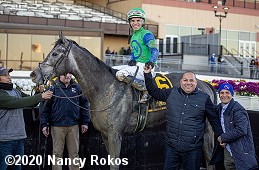 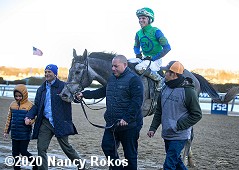 Left: Water White in the winner's circle with trainer Rudy Rodriguez on the far right. Rodriguez said, "We were happy with the way she was coming into the race. It's a very tough group, but she was training very good. We decided to take a chance and she's been beaten by some nice, solid horses. We just took our time and let her continue to develop and today was our day.  She was coming every step of the way. She wants to run all day. We're going to try to point to the Gazelle from here. We'll see how she comes out of this race and we'll take it from there."

Right: Water White heads to the winner's circle. Winning jockey Jorge Vargas Jr. said, "The filly was super good going into this race. It was about time because she's been running so good. She kicked pretty well." 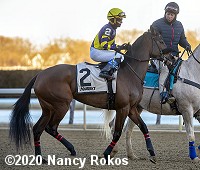 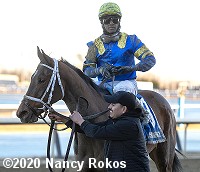 Left: Second place finisher Kansas Kiss in the post parade. Trainer Ray Handal said, "I thought we were home free. She might have got a little idle being in front for so long, but she's a nice horse and she showed us that today. She bounced out of that last race so good and I knew she'd be better going a bit longer. She showed she's a legit contender (for the Kentucky Oaks)."


Kicking off Saturday's stakes quartet, field of 7 older horses went 1 mile on the main track in the $125,000 Stymie Stakes. Wicked Trick, winner of 6 straight in allowance company, was sent off as the 2-1 favorite over 3-1 American Anthem, 4th in the Toboggan (G3), and 4-1 Diamond King, unraced since 5th in the Bold Ruler Handicap (G3) in October. 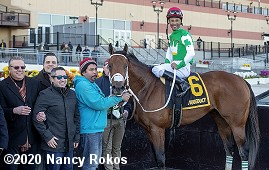 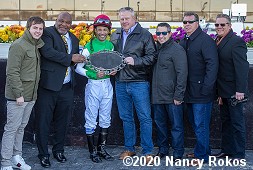 Left: Diamond King in the winner's circle. Winning trainer John Servis said, "It was a very nice win. The track is kind of deep and heavy. I was a bit concerned with him coming off the layoff, but he ran really well. All I was concerned about was the track, but he handled it very well. Hopefully, this will set him up for the next race. It looks like we're going to shoot for the Charles Town Classic again and see if we get lucky. We got beat a half-length last year, but he ran really well."

Right: Trophy presentation for the Stymie Stakes. Winning jockey Kendrick Carmouche said, "I was sitting comfortable. I didn't want to make the lead too early. Around the turn, I asked him to go because Manuel [Franco, aboard American Anthem] was putting pressure on me, so I just let my horse run away from the other ones. He never really took off. I thought I had more horse, but he kept me there, and I just kept motivating him." 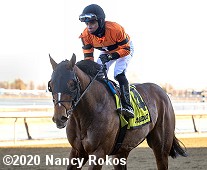 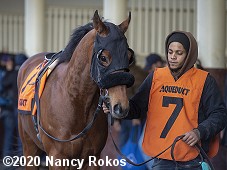 Left: Second place finisher American Anthem returns after the race. Jockey Manny Franco said, "I had the trip that I wanted in stalking the pace. I knew the two horses on the inside had more speed than my horse. When they cleared me, I ended up in the perfect position. I have to give credit to the winner. He ran really hard and never stopped. (American Anthem) gave me all he had. [Trainer] Danny Gargan had him ready for the race, but the winner ran well. I have to give him credit."

Right: Third place finisher Backsideofthemoon in the paddock before the race. Jockey Eric Cancel said, "I thought I had a really good trip. The two horses that finished in front of me were the two toughest horses in the race, and my horse didn't finish too far behind them. I think my horse ran a huge race. They brought him in really good condition. He had been working well. I think he will just keep improving and run better and better."