The feature race on Saturday at Aqueduct was the $150,000 Toboggan Stakes (G3), a 7 furlong main track sprint for older horses. Light snow fell during the card, with temperatures in the low 30's. Mind Control was sent off as the 6-5 favorite, unraced since winning the H. Allen Jerkens (G1) at Saratoga in August. In to challenge him included 3-1 second choice American Anthem, unraced since 4th in an allowance at Keeneland in October, and 5-1 third choice Nicodemus, 9th in the Cigar Mile (G1) last out.

Jockey Junior Alvarado sent 17-2 Still Having Fun to the lead exiting the chute through fractions of 23.64 and 46.76 while pressed by Mind Control and stalked by 19-2 T Loves a Fight. Turning for home, jockey John Velazquez sent Mind Control to challenge, poking his head in front through 3/4 in 1:11.40. Nicodemus, last early under Kendrick Carmouche, came out 5 wide for room and rallied but Mind Control held him off to win by a nose in 1:24.23. It was another nose back to 9-1 Sunny Ridge third. 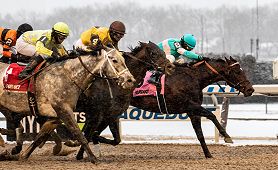 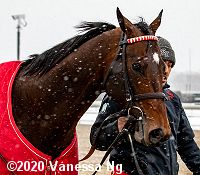 Left: Mind Control in the winner's circle. Winning trainer Gregg Sacco (far left) said, "From a trainer's standpoint, if you have the right horse, you expect them to be ready. If we did our job, we expected Mind Control to win today. He was coming off the layoff, but he was ready to run. He ran to his training and showed the true guts and determination he shows in all of his races. I wish he wouldn't wait on horses, but that being said, you never know how they will perform, but he trained great. The word I used to describe him last year still stands: genuine. He's a genuine horse and we are really happy he came back the way he did."

Right: Mind Control heads back to the barn after the race. 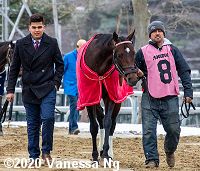 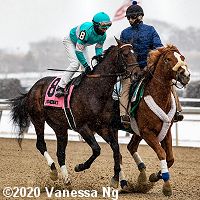 Left: Mind Control walks over before the race. Sacco added, "It's great to see him back. It's a great weekend for our barn. We just couldn't be happier for (co-owner) Steve Brunetti and my brother Rick, who did a great job managing our colt to get him to his 4-year-old campaign. It's an exciting time ahead. We'll map out a plan and we'll pencil in the Carter and might just wait for that. He runs well fresh."

Right: Mind Control in the post parade. Winning jockey John Velazquez said, "He's such a nice horse. He lets you do whatever you want with him. The only thing; he started to wait on the horses coming down the stretch, and I had to get him focused again to pay attention. I had to hit him left-handed, but I also didn't want to foul anyone and at the same time I wanted him to see the horses to his outside. Once he did, he got competitive right away." 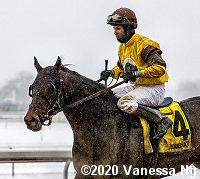 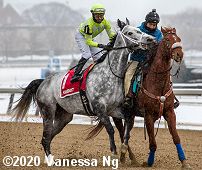 Left: Second place finisher Nicodemus returns after the race. Jockey Kendrick Carmouche said, "Linda [Rice, trainer] told me just don't let him have to do too much to make up so much ground. I kept him a little bit closer, and he ran awesome. It's just a bit disappointing we got beat in a photo, but sometimes it goes that way."


Immediately before the Toboggan, a field of 6 New York-bred 3-year-old fillies contested the $100,000 Franklin Square Stakes over 6 1/2 furlongs on the main track. Joseph A. Gimma Stakes runner-up Fierce Lady was sent off as the 9-10 favorite over 5-2 Big Q, 6th in the New York Stallion Series Stakes after winning the Key Cents, and 5-1 A Freud of Mama, winner of the New York Stallion Series Stakes.

Jockey Manny Franco sent Fierce Lady to the lead exiting the chute through fractions of 22.39 and 46.52 while pressed by Big Q and stalked by A Freud of Mama. Turning for home, Fierce Lady tired as jockey Jorge Vargas Jr. sent A Freud of Mama 5 wide to take over the lead through 3/4 in 1:12.15. Kept to task by Vargas, A Freud of Mama drew clear late to win by 6 lengths over Big Q in 1:19.15. It was another 2 1/4 lengths back to 18-1 Firenze Freedom third, and 3/4 more to favorite Fierce Lady fourth. 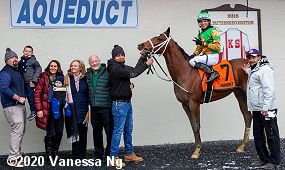 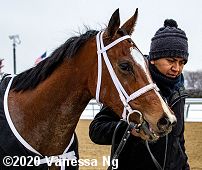 Left: A Freud of Mama in the winner's circle. Winning jockey Jorge Vargas Jr. said, "Today, she really proved to me that she wants to be a good horse. I was behind horses and she was taking me places. Whenever I got a seam, she went for it. I really loved it. She's still a little nervous but she's getting there. She wants to be a good horse and she's proven it. She likes coming off the pace."

Right: A Freud of Mama heads back to the barn. 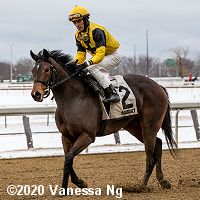 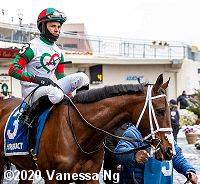 Left: Second place finisher Big Q returns after the race. Jockey John Velazquez said, "We were in a perfect position. I put a little pressure on the horse on the lead. I knew (Fierce Lady) was a dangerous horse at the three-eighths pole, and the other one (A Freud of Mama) just passed us."

Right: Third place finisher Firenze Freedom in the paddock before the race. The Jason Servis trainee improved her record to 1 win, 0 seconds, and 2 thirds in 5 starts, earning $71,155 for owner-breeder Mr. Amore Stables. 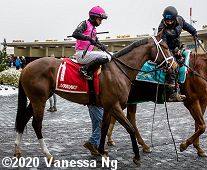 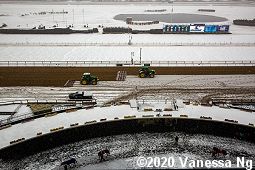 Left: Fourth place finisher and beaten favorite Fierce Lady in the paddock before the race. The Dermot Magner trainee has a record of 2 wins, 2 seconds, and 0 thirds in 5 starts, earning $200,400 for owners Nice Guys Stables and Steve Hornstock.

Right: The horses in the paddock for race 5 with snowy Aqueduct in the background.