The $250,000 Garden City Breeders' Cup (G1) kicked off the stakes schedule for Belmont Park's Fall Championship Meet. A field of eleven 3-year-old fillies went to the gate in this 1 1/8 mile trip over the Inner Turf Course and a prep for the Breeders' Cup Filly and Mare Turf. Magnificent Song was sent off as the lukewarm 3-1 favorite off a win in the Lake George in her last start. Also in the race were 9-2 second choice Chaibia, making her first American start after winning the Prix de Psyche at Deauville in France, and 5-1 third choice Take The Ribbon, second in the Del Mar Oaks in her last start.

9-1 shot Quite A Bride went to the front right away and set a pace of 23.33, 47.16, and 1:11.91 with 13-1 Maxxi Arte and Chaibia stalking her a length behind. Favorite Magnificent Song was unhurried early, settling at the rear of the field for the backstretch run. At the top of he stretch, Quite A Bride tired and dropped from contention, as the race set up for the closers. Take The Ribbon, who had pressed the pace in fifth the whole way, made her bid on the turn and gained a short lead in mid-stretch. However, Magnificent Song was closing well down the center of the course after splitting horses on the far turn. The favorite finished strong on the outside and drove right on by Take The Ribbon to win by 2 lengths in 1:48.48. It was just 1/2 a length back from Take The Ribbon to 7-1 Jade Queen in third. 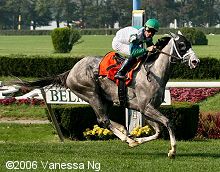 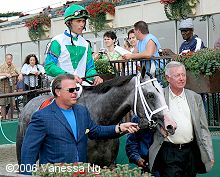 Her happy owners take Magnificent song for her walk down Victory Lane. Winning jockey Garrett Gomez said, "The more she has raced, the more professional she has gotten. She put me where I needed to be. She's really got an honest kick. At the top of the stretch, I just knew I had to get her out I don't think she'll have any trouble with longer distances. She has really progressed this year." 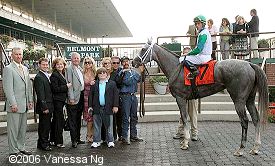 Magnificent Song in the winner's circle with trainer Todd Pletcher on the far left. Pletcher said, "She is improving each time. The better she is settled early on, the bigger her late kicks come. The ground seems a little on the soft side, and I was a little concerned that we would get too far back. But when they went 23 and change, that helped. That was big: a Grade 1 win for her with her pedigree is terrific." 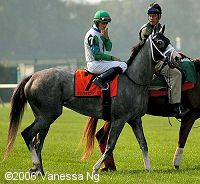 Magnificent Song heads toward the starting gate before the race. 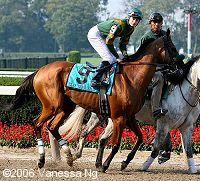 Second place finisher Take the Ribbon in the post parade. Her trainer Wally Dollase said, "I was very pleased with her; we got a good ride from the jockey. I was very pleased. I'm not saying she could have won it, because the filly that beat her was pretty good. I was pleased to beat quite a few good fillies." Jockey Julien Leparoux added, "We had a good trip, but she was second-best." 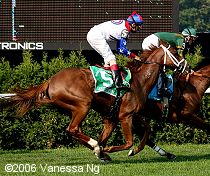 Third place finisher Jade Queen runs out after the race . Her jockey John Velazquez said, "My filly ran very good today, but was just third-best. I had a clean trip, and she responded when I asked her for run." Trainer Todd Pletcher added, "I thought Jade Queen also ran very well, this was a big step up for her. But she showed she can compete in Grade 1s. We'll see how everyone comes out of this race and go from there."