Belmont Park’s most important races for juveniles were contested on Saturday for horses prepping for the Breeders’ Cup Juvenile and Juvenile Fillies to be run at Churchill Downs in three weeks’ time. A small crowd of just 6,222 came out to see the last two major Breeders’ Cup prep events of the Fall Championship Meet. In the first of three stakes events on the card, two-year-old fillies competed in the $400,000 Frizette Stakes (G1), a 1 mile event around one turn of the main track. Runaway maiden winner Allude was sent off as the 2-1 favorite for Darley Stable and trainer Tom Albertrani over 5-2 second choice Awesome Ashley from the powerful barn of Todd Pletcher, and 6-1 third choice Meadow Breeze, winner of the Matron in her last start.

Out of the chute and down the backstretch, a three-horse battle ensued between 9-1 Lilly Carson, 24-1 Our Fantene, and Meadow Breeze through quick fractions of 22.62 and 45.81, while favorite Allude sat in mid-pack fifth and Awesome Ashley settled on the outside away from trouble in fifth. Turning for home, Lilly Carson pulled away from the pack by 1 1/2 lengths through 3/4 in 1:12.03. She stubbornly held the lead with a furlong to go, but 12-1 shot Sutra, who had raced back in eighth early, had found a hole on the inside on the turn and closed strong late to run right by the pacesetter to win going away by 1 3/4 lengths in 1:40.22. 47-1 longest shot Enchanting Star also closed well to take second, 1 3/4 lengths clear of Lilly Carson in third. Awesome Ashley made up ground but was left with too much to do having taken the turn wide, finishing another 1 1/4 lengths back in fourth, while favorite Allude faded late and disappointed in sixth.

Check out the other races on the card: The Champagne for the 2-year-old colts and the Jamaica Breeders' Cup Handicap for 3-year-olds on the turf. 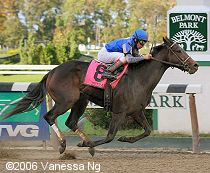 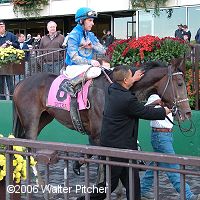 Sutra takes her walk down Victory Lane to the winner's circle. Winning jockey Mike Luzzi said, "She broke a little aggressive and I had to take her back a little. Then, the dirt caught her and my instructions were just to leave her alone. Around the turn, I just kept catching all the breaks. It was a decision to go outside or inside turning for home. At Belmont, you don't want to, but I made the decision to stay inside. I had to work on her a little bit, but she took it. You don't want to get beat down on the fence and have that as an excuse, but everything worked out." 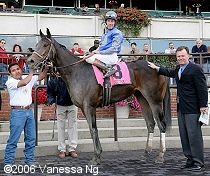 Sutra in the winner's circle with trainer Michael Stidham on the right. Winning trainer Michael Stidham said, "She's a real level-headed filly. She's done everything right since the day I got her. In her first start, she hopped at the start and was last and came flying from behind. When she ran in the Lassie, it was a real sloppy mess. She might have made the lead a little too early and we got beat a dirty whisker. We wanted to keep her around one turn; that's why she didn't run in the Alcibiades. Looking at the paper, it looked like there was a lot of speed. I was a little concerned when I looked at the track - it looked like a dry beach out there. I didn't know how she would handle it because she had been training on Polytrack for three months. We're very happy with her. Certainly, after this, we would have to think about the Breeders' Cup (Juvenile Fillies)." 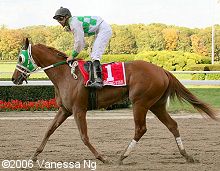 Second place finisher Enchanting Star returns after the race. Her trainer Jennifer Bramblett said, "I thought she wanted to go long. She doesn't want to sprint and do those quick fractions. I knew that if she settled in and to the right ride, she could do it. She's got a heart of gold, and I knew she wouldn't give up. She'll probably be turned out for the rest of the year." 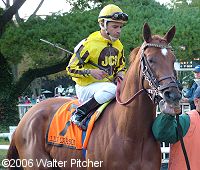 Third place finisher Lilly Carson in the paddock before the race. Her trainer Ralph Nicks said, "She made a great run. It was only her second time out. She was a little rank early, stretching out after a 5 1/2-furlong race. We'll see what the owner wants to do. I would say she is probably not going to the Breeders' Cup." 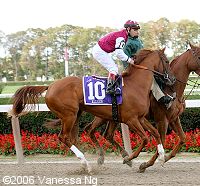 Sixth place finisher and beaten favorite Allude heads for the track before the race.