The major New York prep for the Breeders’ Cup Juvenile is the $400,000 Champagne Stakes (G1) and a small crowd of just 6,222 came out to watch. A field of ten 2-year-olds went to post in this 1 mile event over the main track, with runaway maiden winner Nobiz Like Shobiz sent off as the 7-5 favorite over 5-2 Scat Daddy, winner of the Sanford and second in the Hopeful, and 6-1 third choice I’m a Numbers Guy, winner of the Bertram Bongard last time out.

22-1 outsider Pegasus Wind was allowed an uncontested lead down the backstretch and around the far turn through easy fractions of 24.00, 47.78, and 1:12.22, with the rest of the field bunched up 1 1/2 lengths behind most of the way. Nobiz Like Shobiz settled in a mid-pack fourth while Scat Daddy rated between horses in seventh for the long backstretch run. Jockey Cornelio Velasquez took Nobiz Like Shobiz outside on the turn to gain position and the favorite took the lead with a furlong to go. However, Scat Daddy had come out four wide on the turn and closed well through the stretch, collaring the favorite inside the 1/16 pole to prevail by 3/4 length in a time of 1:36.97. It was just 1/2 a length back to pacesetter Pegasus Wind in third.

Check out the other races on the card: The Frizette for the 2-year-old fillies and the Jamaica Breeders' Cup Handicap for 3-year-olds on the turf. 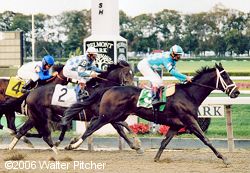 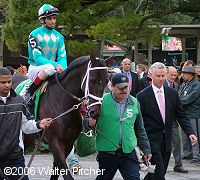 Winning trainer Todd Pletcher (right) with Scat Daddy as they leave the paddock before the Champagne. The win was trainer Todd Pletcher’s 93rd of the year, breaking the previous single-season mark of 92 set in 1987 by his mentor, Hall of Fame trainer D. Wayne Lukas. Pletcher said, "It's a tremendous accomplishment for me and my staff. It's a little bit bittersweet because I hold all of Wayne's accomplishments in highest regard. To be honest, I didn't think it was an attainable record. We had one of those remarkable years where everything has been clicking and horses have been running well. It's been a lot of fun." Of Scat Daddy’s win, he added, "It was a huge race. With each race, he's gotten a little more better and a little more professional. He worked his way through traffic and made a big late run. He did what we thought he would do when we stretched him out. I would think all three horses - Scat Daddy, Circular Quay, King of the Roxy - if they are doing well, have all earned the right to be there (in the Breeders’ Cup)." 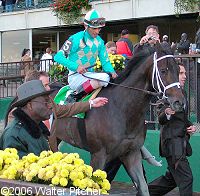 Scat Daddy takes his walk down Victory Lane to the winner's circle. Winning jockey John Velazquez said, "Trying to teach him something in Saratoga paid off today. He handled the distance and it worked out good. It scared me a little bit because (Nobiz Like Showbiz) got through on the rail and I had to go around the other two horses. I caught up to them quickly, but was afraid I used him too much. Once he switched lead and went on, he put in a good run down the lane." 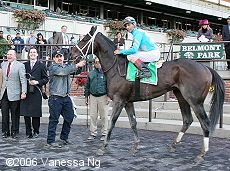 Scat Daddy in the winner's circle. Winning trainer Todd Pletcher said, "It was a huge race. With each race, he's gotten a little more better and a little more professional. He worked his way through traffic and made a big late run. He did what we thought he would do when we stretched him out. I would think all three horses - Scat Daddy, Circular Quay, King of the Roxy - if they are doing well, have all earned the right to be there (in the Breeders’ Cup)." 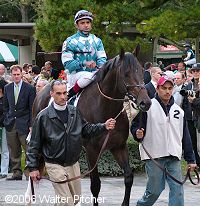 Second place finisher and beaten favorite Nobiz Like Shobiz heads out to the track before the race. His trainer Barclay Tagg said, "He was in tight there for awhile. He was in some trouble and couldn't get out in time. Cornelio (Velasquez) said that if he broke better, he probably could have won the race. This horse is just a big dummy. This was a big step, going into a Grade 1 off one race. The Breeders' Cup probably won't be the prudent thing to do, but I wouldn't rule it out." Velasquez added, "My horse is a very good horse. I think he is a better horse than the horse that beat me. My horse lugged in a little bit the last sixteenth; I think he was a little tired. (Scat Daddy) ran more times than my horse." 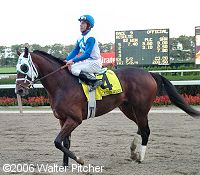