Two-year-olds highlighted the Saturday card at Belmont Park, with two stakes races having Breeders' Cup implications in the juvenile divisions. The first of these, the $250,000 Matron Stakes (G1) featured 2-year-old fillies sprinting 7 furlongs on the main track. Magical Ride was sent off as the 6-5 favorite despite finishing third in her last start, the Adirondack at Saratoga. Also in the field of six were Adirondack winner and 5-2 second choice Octave, and 3-1 third choice Cash's Girl, runaway winner of her debut at Delaware last out.

7-1 shot Featherbed battled with 34-1 longest shot Meadow Breeze down the backstretch through a quarter in a quick 22.73 and a half in 45.93, while favorite Magical Ride settled in third. Entering the stretch, Featherbed continued to lead but Meadow Breeze, who had stalked her on the far outside, dug in late and poked her head in front in the final strides to pull off the huge upset in a time of 1:24.82. Octave, who had raced in fifth on a ground-saving trip, rallied strong through the lane and finished in a dead-heat for second with pacesetter Featherbed. It was a long 8 1/4 lengths back to fourth place finisher Cash's Girl, while favorite Magical Ride failed to fire in the stretch and finished fifth. 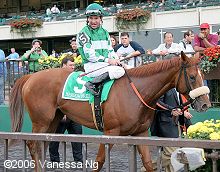 Jockey Kent Desormeaux smiles while Meadow Breeze takes her walk down Victory Lane. Desormeaux said, "She ran well. Carl was perfect in the paddock. He said, `You're going to enjoy the ride.' She is picture-perfect on the foot. I can't help but love her now. The brilliant speed never materialized. I think John (Velazquez, aboard Featherbed) were quite comfortable down the backside. This filly out-gamed them the last quarter of a mile." 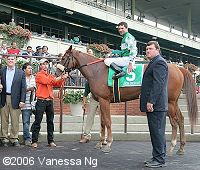 Meadow Breeze in the winner's circle. Winning trainer Carl Deville said, "She's been a nice filly. I am really happy for the clients. I thought she would be lying a little bit off the pace. I didn't think she would be that close. She was a little bit too far out of it in her last race. This filly has been training very good up to this race. This filly looks at everything around her. If she was finishing up down on the inside, that would have been the worst for her. We had been thinking about the Breeders' Cup but we think she will stretch out. I don't know what our plans are." 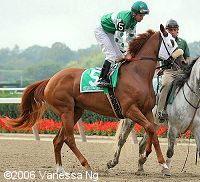 Meadow Breeze in the post parade. Despite her 34-1 odds, she really looked like she was ready to eat them alive before the race. 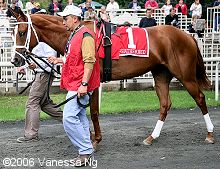 Dead heat for second place finisher Featherbed in the paddock before the race. Her trainer Todd Pletcher, who trains both her and Octave, said, "I could see (Meadow Breeze) was on the outside; I thought Featherbed ran a big race and (Octave) was closing well. It's just one of those deals. Two horses got beat two inches." 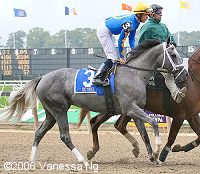 The other half of trainer Todd Pletcher's dead heat for second place Octave in the post parade. 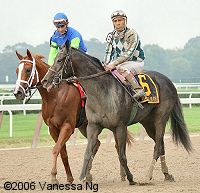 Fifth place finisher and beaten favorite Magical Ride returns after the race with a very unhappy looking Edgar Prado aboard. Her trainer George "Rusty" Arnold said, "She did run down a little bit on her right hind. I am disappointed. I really, really thought she was going to run big. It was kind of a disaster. I'm going to have to go back and re-assess and start over. I left things up to Edgar. I didn't want him to get caught up in a speed duel, so I told him to make up his own mind. He thought taking her back was the right thing to do." Jockey Edgar Prado added, "This filly has been schooled in the mornings to take the dirt. I don't know what happened today. It seemed like she was going good."

The juvenile colts competed in the $250,000 Futurity Stakes (G2), also over 7 furlongs on the main track. Saratoga Special runner-up King of the Roxy was sent off as the 6-5 favorite over 2-1 second choice Incriminate, winner of his debut at Saratoga last time out. Nick Zito trainee and 7-2 third C P West also won his maiden at Saratoga in his previous start.

Incriminate broke awkwardly but went to the front right away to contest the pace with 11-1 Kong's Revenge, 12-1 Sam P., and favorite King of the Roxy through fractions of 23.11 and 46.55 down the backstretch. Around the far turn, Incriminate continued to hold onto the lead but favorite King of the Roxy, who took the turn four wide, was gaining on the pacesetter. In mid-stretch, King of the Roxy poked his head in front and held off the late-closing C P West in the final 1/16 to prevail by 3/4 length in a time of 1:24.09. It was a long 3 lengths back to Kong's Revenge in third, while Incriminate faded to fourth. 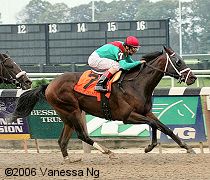 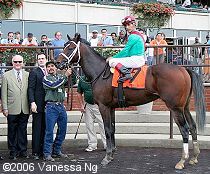 King of the Roxy in the winner's circle with Team Valor managing partner Barry Irwin on the far left. Winning trainer Todd Pletcher said, "I thought he got some good experience out of his last race. He is still learning a little bit. He is still looking around a little bit. Each race and each work, he gets a little more focused. He's a very easy horse to train. He's not quirky; he's just a little bit curious. Last time, he got up to the leader and eye-balled him and it seemed like he was more focused on the horse than on running by. The only thing we talked about today, was that, if you get to that position again, go ahead and try to put him away. I would think we will go right to the Breeders' Cup." 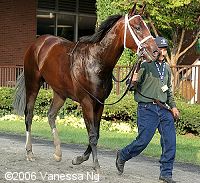 King of the Roxy heads back to the barn after the race. Winning jockey John Velazquez said, "He just kind of waits. Today, I got him going and as soon as I passed that horse in front, I spanked him. He went on and opened up. He got to the front, and he started waiting. Even on the gallop out, he went the same way. I think he can be better if he puts it all together." 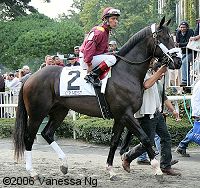 Second place finisher C P West heads out of the paddock before the race. His trainer Nick Zito said, "Luck is a big factor. If we drew outside and the other horse drew inside... He had to wait and make his move. I'm proud of him, he's a wonderful horse. The winner had more experience and had a good post. I've got to be happy with our horse's performance. It's been frustrating all year with all these seconds, I can't even count them all. I don't know what we'll do. If he comes back well, we might give him another race. If not, we might give him some time." 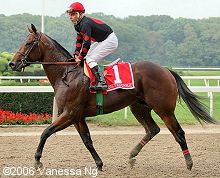 On the undercard of the two juvenile races was the $150,000 Noble Damsel Breeders' Cup Handicap (G3) for older fillies and mares at 1 mile on the Widener Turf Course. 3-1 second choice Pommes Frites was allowed an uncontested lead of as many as 4 lengths through easy fractions of 24.14, 48.27, and 1:11.88 over the firm course. Turning for home, Pommes Frites continued to hold the lead, but 2-1 favorite Karen's Caper, who had raced in mid-pack early, came out wide and closed strong down the center of the course to run past the pacesetter in the final 50 yards to win by just 3/4 length in 1:34.91. It was another 3/4 length back to 7-2 third choice Mauralakana in third.
Results Chart from DRF. 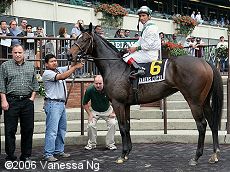 Karen's Caper in the winner's circle. Trainer Bobby Frankel (far left) and jockey Edgar Prado sure don't look very happy to be there! Frankel said, "I thought she was compromised last time out by a slow pace. That was a concern today also with Pommes Frites in there. Edgar (Prado) had her in a good spot and she kicked in real hard today. We'll look at races like the WinStar and the Matriarch." Prado added, "She broke well, but she doesn't have the speed to be right up there. You've just got to let her relax and let the race develop. She's got a real nice kick and she was there when I asked her." 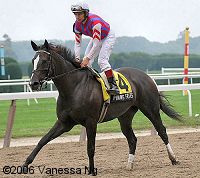 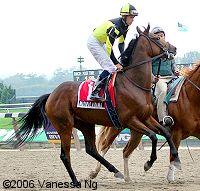