On Sunday December 4, Norse Ridge Farm in King City, Ontario hosted a Stallion Open House, featuring their two new stallions Perfect Soul and Gayego. Located 40 minutes from Woodbine, the facility features a 5/8 mile training track and five barns, accommodating weanlings and yearlings, horses in training, broodmares, horses with special-care needs, as well as the stallions. For the 2012 season, Norse Ridge is home to six Thoroughbred stallions (one of which is also AQHA registered), and three Quarter Horse stallions. Due to the cold damp weather outside, the stallions were shown inside the main stallion barn by farm manager Jason LaMarche-Hunderup. 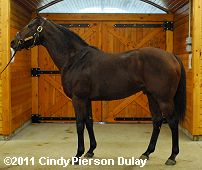 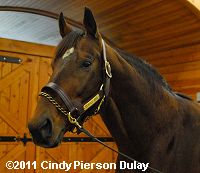 Perfect Soul is one of two new stallions at Norse Ridge. He was Canada's Champion Turf Male in 2003 after winning the Shadwell Mile (G1) at Keeneland and the King Edward Breeders' Cup Handicap (G2) at Woodbine. In 2004 he set a new course record winning the Maker's Mark Mile (G2) at Keeneland. He retired with 7 wins in 21 starts earning $1,527,764 for owner-breeder Charles Fipke. He originally stood at Darby Dan Farm near Lexington, KY, and his runners have earned over $6.7 million, most notably 2011 Breeders' Cup Filly and Mare Turf winner Perfect Shirl, 2009 Breeders' Stakes winner Perfect Shower, and multiple Woodbine stakes winner Check Your Soul. The son of Sadler's Wells out of Secretariat mare Ball Chairman stands in 2012 for $7,500. 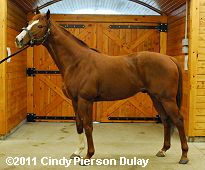 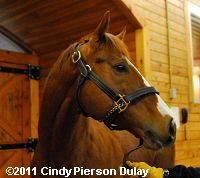 Not Bourbon is the second Charles Fipke homebred on the Norse Ridge roster for 2012. At 2, he won the Bull Page at Woodbine in a track record 1:08.64 for 6 furlongs, and went on to be Canada's Champion 3-year-old Male, winning the Queen's Plate, Plate Trial, Queenston, and Overskate Stakes. He showed versatility on the track, winning stakes races from 6 to 10 furlongs. He retired with 7 wins in 16 starts, earning $1,085,309. The son of Not Impossible (who is a full brother to Perfect Soul) out of Storm Boot mare Bourbon Belle stands for a fee of $5,000. 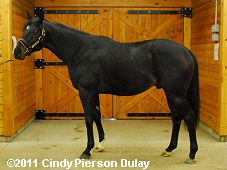 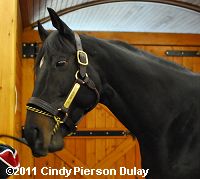 Gayego is the second new stallion at Norse Ridge. The Darley Stud homebred won the Arkansas Derby (G1) and was second in the San Felipe (G2) in his 3-year-old season, then came back to win the Ancient Title (G1) and Mahab Al Shimaal (G3) as a 4-year-old, along with a second place finish in the Godolphin Mile (G2), and a very close 4th in the Breeders' Cup Sprint (G1). At 5 he won the Presque Isle Mile and was third in the Breeders' Cup Dirt Mile (G1) and Triple Bend Handicap (G1). He only had 1 start at 6 and was sidelined due to injury. Unfortunately, he was unable to return to the track. He retired with 8 wins in 21 starts, earning $1,751,120. The son of Gilded Time out of Lost Code mare Devils Lake stands for an introductory fee of $6,500. 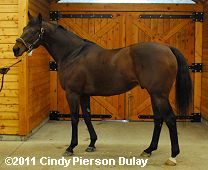 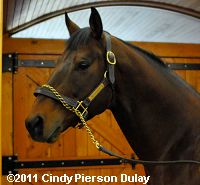 Rebellion is an English-bred son of Mozart out of Lahib mare Last Resort. After finishing in the money in 7 of his 8 starts in England, he was purchased by current owners Hickory Tree Stable and sent to trainer Graham Motion. He won the Commonwealth(G2) at Keeneland and the Ack Ack(G3) at Hollywood, retiring with 7 wins, 5 seconds, and 5 thirds in 26 starts, earning $816,277. His first crop are yearlings in 2012. He stands for a fee of $3,500. 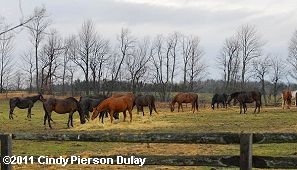 Some of the broodmares in the pasture at Norse Ridge Farm.