The $500,000 Breeders' Stakes is the third and final race of the Canada's Triple Crown for 3-year-olds foaled in Canada. A field of 13 went to post in this 1 1/2 mile test over Woodbine's E.P. Taylor Turf Course on Sunday afternoon, under sunny skies and temperatures in the mid 70's. Queen's Plate winner Eye of the Leopard was sent off as the 9-10 favorite, coming off a close third place finish in the Prince of Wales Stakes. Reservoir, who was 11th in the Plate after winning his first two starts including an allowance on the turf, was the 5-1 second choice over 7-1 third choice Mr. Foricos Two U, who was second in the Plate and a distant 5th in the Prince of Wales. Prince of Wales Stakes winner Gallant was dismissed as the 10-1 fifth choice on the board.

Jockey Emile Ramsammy sent 34-1 Genius Kinshasa to the lead on the clubhouse turn through slow early fractions of 24.98, 49.80, 1:14.82, and 1:39.53 while being stalked by 36-1 Full Throttle down the backstretch. Eye of the Leopard sat third behind the pacesetters. Entering the stretch, Full Throttle poked a head in front of Genius Kinshasa through 1 1/4 miles in 2:04.30, but the early pace battle took its toll on all three as they would fade through the stretch. 47-1 Perfect Shower, who raced midpack 6th early under jockey Jono Jones, came out 4 wide into the stretch to take over the lead at the 3/16 pole. He opened up a 2 length lead at the 1/8 pole, and was all out to hold off late-running 29-1 Guipago late to get the win by 3/4 length in 2:29.39 over the firm course. It was another 2 1/4 lengths back to Reservoir third. Favorite Eye of the Leopard had nothing left in the stretch, finishing 11th beaten 17 lengths.

The win payoff of $95.30 is a new stakes record. The previous record was set by 1981 winner Social Wizard who paid $43.10. Perfect Shower, a son of Perfect Soul out of Miswaki mare Showering, improved his record to 2 wins, 1 second, and 0 thirds in 8 starts, earning $337,200 for owner-breeder Charles E. Fipke. 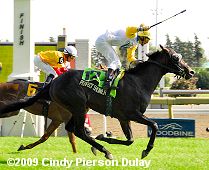 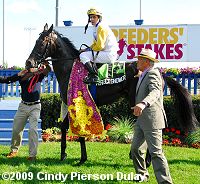 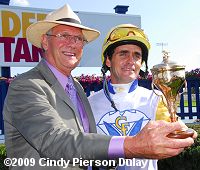 Left: Perfect Shower in the winner's circle was not very cooperative in the winner's circle and wouldn't stand still. His trainer Roger Attfield said, "Obviously, we took a big shot here. These Perfect Souls, they want to be three and four-year-olds anyway. This horse is just starting to come around. We ran him for $25,000 because I knew nobody would (claim) him off his past form. A win picks a horse up big time. Then to step up to a $500,000 Triple Crown race is a big step, but he'd been training so very, very well. His owner, Mr. Fipke, he's a true optimist. He said 'go for it'."

Right: Trainer Roger Attfield and jockey Jono Jones pose with the Breeders' Stakes Trophy. Attfield said about the wide finish, "He's still a big green, gangly horse. He's still learning. I was sitting in the stands with a cold beer watching the race and I thought he was coming over to get some of it at one point (while drifting out). He just got lost, I think." 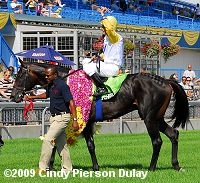 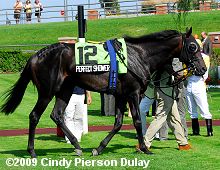 Left: Perfect Shower parades for the fans after the race. His jockey Jono Jones, celebrating his third Breeders' Stakes win said, "Roger told me this morning (Perfect Shower) can't lose. I saved him until the end. I always had horse under me and I said, at 40-1, we can make it a race. He was good enough to hang on. I had confidence in him."

Right: Perfect Shower in the paddock before the race. This was a record 8th Breeders' Stakes win for trainer Roger Attfield. 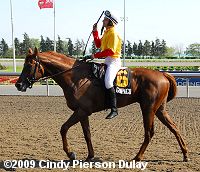 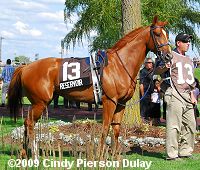 Left: Second place finisher Guipago returns after the race. His jockey Tyler Pizarro said, "My boy ran awesome, I can't complain. It was a perfect trip. I left him be. Everyone else was watching the favorites. I just had to concentrate on my horse and what his best position was. When I asked him, he ran really well. He ran huge. I could see (Perfect Shower) leaning out but I knew he was still running. Kudos to Roger (Attfield)." The Analisa Delmas trainee improved his record to 1 win, 5 seconds, and 2 thirds in 13 starts, earning $211,320 for owner Fieldstone Farms Inc.

Right: Third place finisher Reservoir poses in the paddock before the race. His jockey Jim McAleney said, "I'm very happy with this horse. He showed me once again that he's got a lot of talent and he is a true stayer. We didn't have the best of trips going into the first turn because of his post position. I couldn't seem to find a good spot to put him. Because of his immaturity, right now, he's not a horse you can use and tuck in and turn him off again. I knew if I tapped on him early to get position, I might be in trouble and wind up using too much early. The race unfolded alright after that. He stayed on very well. At the head of the stretch, when Perfect Shower went so wide, I thought I was going to catch him. We didn't. He will win a stakes race, I promise you that." The Julia Carey trainee improved his record to 2 wins, 0 seconds, and 1 third in 4 starts, earning $126,080 for owners Goldie Stables and Weila Ye. 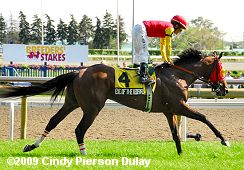 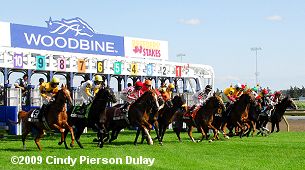 Left: Beaten favorite and 11th place finisher Eye of the Leopard runs out after the race. His jockey Eurico Rosa da Silva said, "I knew going into the first turn, he was trying to run off. When we went to the second turn, I ran out of horse. (When winner Perfect Shower passed on the outside), I was running out of energy already. I didn't abuse him. It's just not his surface. We're going to be strong next time." The Mark Frostad trainee has a record of 3 wins, 0 seconds, and 1 third in 6 starts, earning $785,940 for owner-breeder Sam Son Farm.

Right: The horses break from the gate for the 118th Breeders' Stakes. 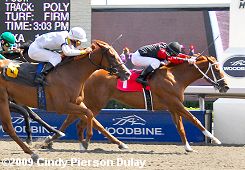 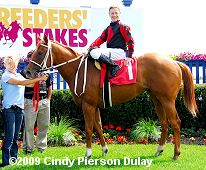 The undercard feature on Breeders' Stakes day was the $125,000 Nandi Stakes, a 6 furlong sprint on the main Polytrack for Ontario-sired 2-year-old fillies. 7-2 second choice Oistins moved to the lead exiting the chute under regular rider Jim McAleney and battled for the lead with 9-1 Threshold down the backstretch through fractions of 22.62 and 46.31. Turning for home, Threshold tired but 30-1 Shesadozer put in a strong rally out wide. Oistins held her off late to get the hard-fought victory by a neck in 1:12.22. It was 3/4 length back to 10-1 Peploe third, while 6-5 favorite Elated Moon finished 5th.
Results Chart

Oistins' trainer Terry Jordan said, "We thought (the rest) would help her out. She's got a little shin happening. We needed to cool it down. We wanted to run her against the Ontario Sire horses. We thought it would be a little easier."

Her jockey Jim McAleney added, "She's got a lot of natural lick so we were able to take control of the race early. The good thing was, with all of her talent, we were able to give her, in the middle part of the race, a break and a breather and that was enough to allow her to finish. She's a quality horse, to pick up that part of the race and dig back in. She fought on so tough and so hard. It shows what she's made of."