A field of thirteen Northern Hemisphere 3-year-olds and Southern Hemisphere 4-year-olds entered the starting gate in the $2 million Al Naboodah Group UAE Derby (G2), an 1800-meter (about 1 1/8 mile) trip over the main dirt at Nad al Sheba. Locally trained Asiatic Boy was sent off as the odds-on 4-5 favorite, as the UAE 2000 Guineas and Al Bastakiya winner was attempting to sweep the UAE Triple Crown. Also in the field were two Godolphin entrants, 7-2 Eu Tambem, winner of the Maktoum Challenge, and the filly Adil, 9-2 third choice and winner of the UAE 1000 Guineas and the UAE Oaks.

33-1 Rallying Cry and 20-1 Day Pass battled on the front end in the early stages while being stalked by Asiatic Boy the whole way. Around the far turn, 33-1 Jack Junior, who sat in mid-pack early, made his move toward the leaders and drew even with the pace with 3 1/2 furlongs to go. However, Weichong Marwing aboad the heavy favorite had timed his run perfectly. Asiatic Boy surged to the front at the top of the stretch, and drew off through the lane to win by 9 1/2 lengths over Jack Junior in a time of 1:48.82. It was another 2 3/4 lengths back to Adil in third. Eu Tambem was seventh while Folk was tenth.
Results Chart for the race from Emirates Racing Authority 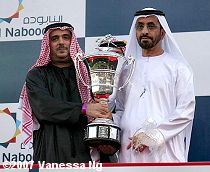 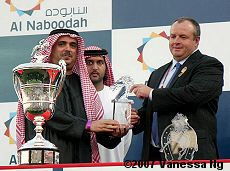 Left: The trophy presentation to owner Sheikh Mohammad bin Khalifa al Maktoum on the right. He said, "We were expecting him to win tonight as he is in great form. He's such a fine horse and we are not surprised with what he has given us tonight."

Right: Winning trainer Mike de Kock gets his trophy. He said, "He got no favors, as he had to go three wide, and was kept wide, but his cruising speed is his big attribute, and he walked away about 200 meters out; it was a joke. They tried their tactics out there but these did not pay off. He's a super-horse. I'd love to go for the Queen Anne Stakes (at Royal Ascot), but the long-term objective is to bring him back for next year's Dubai World Cup. We'll work things out when we get there." 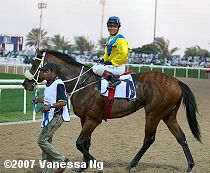 Asiatic Boy returns after the race. Winning jockey Weichong Marwing said, "It was awesome. It was a competitive field and he has come out on top and he is the best horse I have ridden." 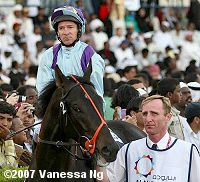 Second place finisher Jack Junior before the race. His jockey Richard Hills doesn't look very positive about their chances at this point. After the race he said, "For a horse that is still a maiden, mine has run a great race. He is a horse with a future but the winner today was a very good horse." Trainer Brian Meehan said, "He's entered at Churchill Downs, so we'll have to think about the possibility. I'd like to go for at least one of the Triple Crown races. I'm so pleased with him. He's only half a horse, there's so much improvement in him." 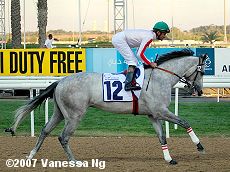 Third place finisher Adil runs out after the race. His jockey Kent Desormeaux said, "The race couldn’t have gone better. The only way to make it better was to take out those two in front of me, because this horse ran as fast as he could."