The traditional stakes event on Canada Day at Woodbine is the $200,000 Dominion Day Stakes (G3), featuring the top older horses on the grounds going the classic distance of 1 1/4 miles on the main track. Fans enjoyed clear skies and temperatures in the high 70's for the holiday card of racing. This year, only five entered, but with Ben Ali Stakes winner Sterwins scratching out the morning of the race, just four went to the gate, with defending champion True Metropolitan sent off as the 2-5 favorite. The champion older male in Canada in both 2006 and 2007 came into the race off three straight wins including the Autumn Stakes last November and then the George Royal at Hastings and the Eclipse at Woodbine so far this year. Jiggs Coz, winner of last year's Plate Trial before finishing third in the Plate and second in the Prince of Wales, was the 7-2 second choice, exiting a poor 9th place showing in the Connaught Cup, his only start on turf. 5-1 Bond Fire, shipping in from Pimlico where he won two straight allowance races, and 10-1 Torquay, sixth in the Eclipse last time out, completed the field.

Jockey David Clark sent Jiggs Coz to the front immediately and he was loose on the lead by as many as 1 1/2 lengths through easy fractions of 24.76, 50.07, and 1:14.50 over the Polytrack. True Metropolitan on the outside and Bond Fire on the rail disputed 2nd position, while Torquay was always about 5 lengths off the lead, well back of the pack. After a mile in a slow 1:39.16, jockey Jim McAleney asked True Metropolitan to challenge for the lead, but with such an easy pace Jiggs Coz was up to the challenge. Clark asked Jiggs Coz to open up and he responded, drawing off through the stretch to an impressive 2 3/4 length victory over True Metropolitan in 2:04.99. It was just a length back to late-running Torquay third, and 5 1/2 more to the tiring Bond Fire in last. 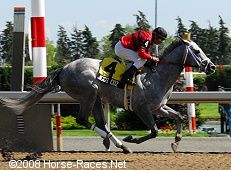 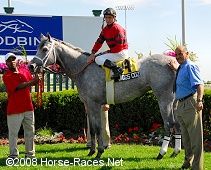 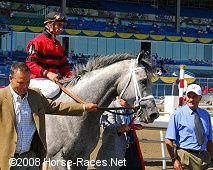 Left: Jiggs Coz heads for the winner's circle with trainer Sid Attard on the right. Attard said, "We talked to David and he said this horse prefers Polytrack to the grass. We thought (True Metropolitan) was going to go to the lead, but he showed speed nice and easy. When I saw the 50 (half-mile mark), I was very happy."

Right: Jiggs Coz in the winner's circle. 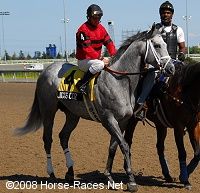 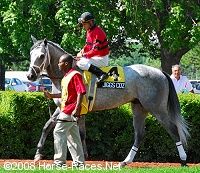 Left: Jiggs Coz in the post parade. Asked to compare this year to last year, trainer Sid Attard said, "He came up with some problems. I'm not making excuses. We were very disappointed we didn't win the Plate, but what are you going to do? I wish he was as good in the Plate as he was today."

Right: Jiggs Coz in the paddock before the race. 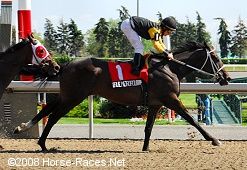 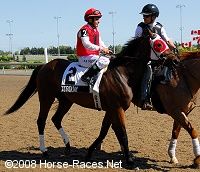 Left: Second place finisher and beaten favorite True Metropolitan crosses the finish line. The 2-5 favorite was under severe restraint early under jockey Jim McAleney, swung to the outside on the clubhouse turn, challenged for the lead at the top of the lane, but tired late. The Terry Jordan trainee improved his record to 18 wins, 6 seconds, and 4 thirds in 36 starts, earning $1,078,295 for owner Bahadur "Bob" Cheema.

Right: Third place finisher Torquay in the post parade. The 10-1 longest shot was rated early by jockey Eurico Rosa da Silva, then picked up the pace after a mile and rallied well to pass Bond Fire at the 3/16 pole to get third. He improved his record to 6 wins, 3 seconds, and 4 thirds in 28 starts, earning $368,772 for owner-trainer Nickolas De Toro.


Earlier in the card, a field of six older fillies and mares sprinted 7 furlongs in the $100,000 Sweet Briar Too Stakes. My List, winner of the Whimsical and the Hendrie before finishing fourth in the Hill N Dale last time out, was the even-money choice over 7-2 Executive Flight, exiting a third place effort in the Ballade Stakes. Star Operator, fourth in the Tattling Stakes on the turf last out, was the 5-1 third choice.

11-2 fourth choice Bear Dixiecat was sent to the front exiting the chute by jockey Jerry Baird, and she set fractions of 22.58 and 45.34 while as many as 1 1/2 lengths ahead of favorite My List in second. Entering the stretch, Executive Flight, who had settled in fifth early, came out four wide for room to pass the pacesetters and took over the lead at the 3/16 pole. My List passed Bear Dixiecat in the final furlong but was no match for Executive Flight, who cruised under the line 1 1/4 lengths clear in 1:22.12. It was 1 3/4 lengths back from My List to pacesetter Bear Dixiecat third. 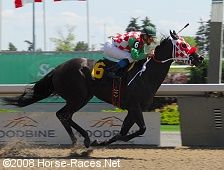 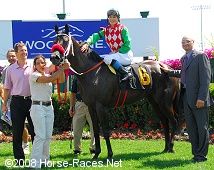 Executive Flight in the winner's circle with trainer Darwin Banach on the right. Winning jockey Chantal Sutherland said, "At the quarter-pole, I felt like she was really kicking in. I was really happy with her positioning early. She's sticky on that lead, so I was getting a little concerned at the end of the race. She ran really professional today." I thought for me today, when I've been riding her, this was her best effort." Sutherland won on all four of her mounts on Canada Day. 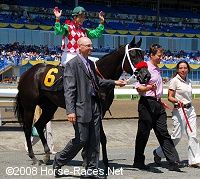 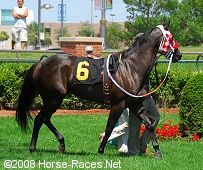 Right: Executive Flight in the paddock before the race. 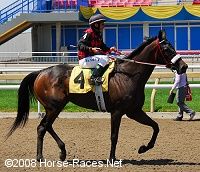 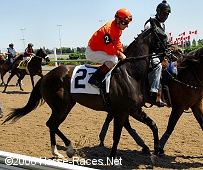 Left: Second place finisher and beaten favorite My List returns after the race. The even-money choice stalked the pace out wide throughout under regular rider Eurico Rosa da Silva, rallied well and was gaining late but had no chance to catch the winner. The Nick Gonzalez trainee improved her record to 6 wins, 6 seconds, and 5 thirds in 23 starts, earning $559,265 for owner Tucci Stables.

Right: Third place finisher Bear Dixiecat in the post parade. The 11-2 shot set the pace for the first 5 furlongs under regular rider Jerry Baird until challenged by the eventual winner at the 1/4 pole, then tired through the stretch. The Reade Baker trainee improved her record to 4 wins, 3 seconds, and 2 thirds in 15 starts, earning $221,556 for owner Bear Stables Ltd.