As the U.S. Triple Crown draws to a conclusion in Saturday's Belmont Stakes, the Canadian Triple Crown is just getting started, with the first jewel being the $1 million Queen's Plate at Woodbine on June 24. The $150,000 Plate Trial is the last major prep for the Plate, and unlike its U.S. counterpart the Derby Trial, is a legitimate prep race being scheduled 3 weeks before the Plate, run at 1 1/8 miles on Woodbine's Polytrack with the entrants carrying the Triple Crown weight of 126 pounds. However, there has not been a Trial winner to win the Gallop for the Guineas since Alydeed in 1992.

Eight Plate hopefuls went to the post on Sunday. Jiggs Coz was sent off as the 9-10 choice coming into this race off a two race winning streak including the Display and the Queenston. In to challenge the heavy favorite were 7-2 second choice Marchfield, who was second in last year's Coronation Futurity but just broke his maiden in his last start, and 9-1 third choice Dancer's Bajan, third in the Queenston last out and the most experienced horse in the field with 3 wins in 7 career starts.

12-1 shot Alezzandro took the lead first time past the stands and set a reserved pace of 23.92, 48.82, and 1:12.95 while being stalked by Jiggs Coz and Marchfield down the backstretch. Dancer's Bajan sat in mid-pack fifth in close contact with the leaders. Entering the stretch, Alezzandro continued to lead but the favorite Jiggs Coz was just hitting his best stride. Jockey David Clark took him wide past the pacesetter and Jiggs Coz quickly shot to the front, opening up a 2 length advantage with a furlong to go, after a slow mile in 1:37.57. Alezzandro tired late in the stretch allowing Marchfield to pass him at the 1/16 pole. Joggs Coz cruised home the easy winner by 3 1/4 lengths in 1:50.77 over Marchfield. It was another 2 3/4 lengths back to Alezzandro in third. Dancer's Bajan failed to rally late and finished sixth. 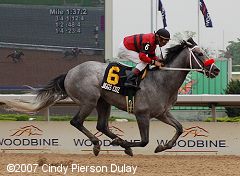 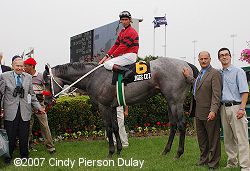 Jiggs Coz looks exhausted in the winner's circle. He perked up after getting hosed off later. Winning trainer Sid Attard said, "He was a nice 2-year-old. He always showed he could run. You hope as a 3-year-old he gets better and he did. I was really happy when I saw the slow pace and he's right there. I (thought) it's all in (jockey David Clark's) hands." Asked about concerns over the Plate distance, he added, "It's his first time (going 1 1/8). He'd only run seven-eighths (this year, before today). I don't think it will be a problem for him. The farther for him, the better." 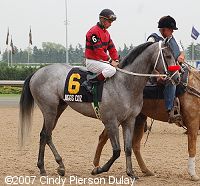 Jiggs Coz in the post parade. Winning jockey David Clark said, "We just kind of planned to be wherever he was comfortable. We thought there would be a little more pace in the race and it didn't develop. And he was where he was very easily, he was kind of dragging me out of the tack the first part. But he settled. Sid did a great job with him. He was in great shape today. He got a little bit tired but that's his first time as a three-year-old packing 126 (pounds). It's going to get to anybody." 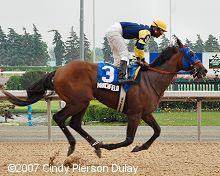 Second place finisher Marchfield gallops out after the race. His trainer Mark Casse said, "Would've liked to have won it, but it was a good race. Jiggs Coz was awfully good, but we'll be ready three weeks from now." 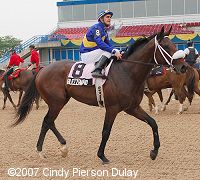 Third place finisher Alezzandro returns after the race. His trainer Kevin Attard said, "He ran his eyeballs out. I'm sure he's going to improve off of this race. It should tighten him up. He was blowing pretty hard and rightfully so. I didn't want to see on the front end. By the same token, nobody wanted the lead. What can you do? He was coming off of a sprint, going 1 1/8 miles in his second start. This was the horse I thought would bring me to the Queen's Plate. This horse had trained fantastic as a baby. I was excited at the time.. He had just come up with some two-year-old problems. We would have liked to have started him earlier. The Plate is at the end of June and they don't change it for you." Jockey Jono Jones added, "He was rank early but he ran a great race." 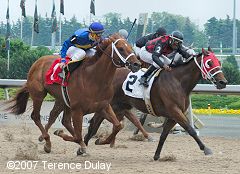 Earlier on the card, a field of seven older horses sprinted 7 furlongs in an optional claiming allowance race for a $71,300 purse. The race marked the return to the track of last year's champion 2-year-old Leonnatus Anteas, using this race as his Queen's Plate prep rather than the Plate Trial. Sent off as the 6-5 favorite, he stalked the pace out wide down the backstretch, put in his bid in mid-stretch but could not catch 6-year-old gelding Nyuk Nyuk Nyuk late, finishing second by a nose in 1:23.29. Trainer Kevin Attard said, "It was his first time against older horses that are already seasoned. I think he's going to move so far ahead off of this race. Hopefully, he comes out of this race in good order. He seems to have cooled out good. He came back to the saddling area well. I think three weeks from now, we'll be there. That's obviously the race we want to win." Stablemate Alezzandro finished third in the Plate Trial giving Attard and owner Knob Hill Stable two potential entrants in the Queen's Plate. Jockey Jono Jones, who rode both colts, said, "Kevin's got a good hand going into the race." 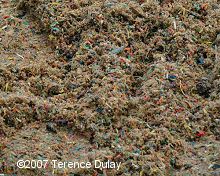 Woodbine's Polytrack surface loosened up during the winter increasing kickback and making it difficult to close from off the pace. In order to tighten it up, manufacturer Martin Collins International added a different wax to the track and also added "jelly cable" which is the plastic insulation found on copper wiring. The Polytracks at Keeneland and Arlington already have this, but Turfway does not.

In this photograph the jelly cable is clearly visible as multi-colored plastic pellets, like the candy sprinkles used on donuts or ice cream cones. Woodbine CEO David Willmot said, "You chop it into small pieces, so it forms part of the rubber component. What's important is it has a petroleum jelly content to it. What's becoming clear is that jelly cable is critical to holding the surface together during the colder weather, preventing separation and moderating the effects of weather change."