The $250,000 Del Mar Derby (G2) on Sunday features some of the best 3-year-old turf males on the west coast go 1 1/8 miles out of the infield chute of the Jimmy Durante turf course. Conditions were excellent with sunny skies, firm going, and temperatures in the mid 70's. La Jolla Handicap (G3) winner and American Turf (G2) 5th place finisher River Boyne was sent off as the even-money favorite in the field of 11. In to challenge him included 11-2 second choice Ride a Comet, winner of the Charlie Barley but 3rd in the Hall of Fame Stakes (G2), and 15-2 third choice Majestic Eagle, making his stakes debut off an allowance win.

Jockey Joe Talamo sent 12-1 Take the One O One to the lead exiting the chute and first time by through fractions of 23.97, 48.26, and 1:12.68 while pressed by River Boyne and stalked by 30-1 Restrainedvengence. Entering the stretch, Take the One O One tired allowing favorite River Boyne to gain the lead through 1 mile in 1:36.32. However, Ride a Comet, 8th early under Drayden Van Dyke, came out 3 wide for room and rallied well to win going away by 1 1/2 lengths over deep closing 51-1 longest shot Kazan in 1:48.11. It was another 1/2 length back to River Boyne third. Animosity, who was 20-1 on the morning line and broke from the outside post 12, was inadvertently held up by the assistant starter and thus was very late leaving the gate, trailing the field the entire trip. The stewards declared her to be a non-starter with all wagers on her refunded, thus officially reducing the field size to 11. 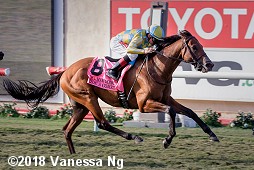 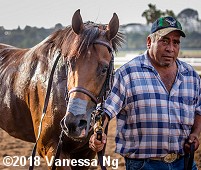 Left: Ride a Comet in the winner's circle. Randi Melton, assistant to winning trainer Mark Casse said, "Mark gave the instructions to Drayden. 'Good luck, safe trip' was all he said. I thought there was enough pace up front and Drayden had him in a perfect position. He was sitting just off the pace, like you would hope, and turning for home he just took off and I started getting really excited. First time you go a mile and an eighth there's always a question mark, but we were pretty confident."

Right: Ride a Comet heads back to the barn. 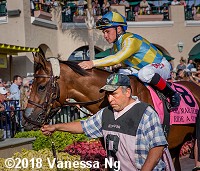 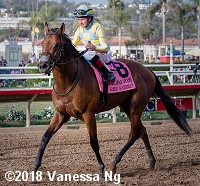 Left: Ride a Comet in the paddock before the race.

Right: Ride a Comet returns after the race. Winning jockey Drayden Van Dyke said, "They told me he was real classy and that he had a nice kick. That was all I knew (about him). He warmed up real well and gave me confidence. During the race it all came up perfect. Good trip all the way. When I swung him out he gave me a big kick. I knew right then we were going to win it. This is stressful (his battle with rider Flavien Prat for the Del Mar jockey title). But I try not to pay too much attention to it. I just keep on riding the best I can." 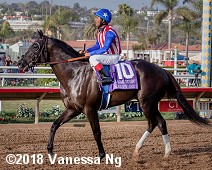 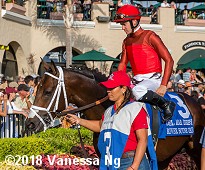 Left: Second place finisher Kazan returns after the race. Jockey Martin Garcia said, "We had a good trip, but there was nothing to run at for my horse. They were walking up front. He needs something to go get. But he ran big."

Right: Third place finisher and beaten favorite River Boyne in the paddock. Jockey Flavien Prat said, "I was in a good spot with him, but this isn't his kind of race – to be running that forwardly. He wants to be back and have something to run at. He ran well, but it is what it is." 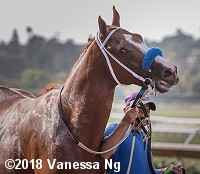 Left: King of Speed in the winner's circle. Winning trainer Jeff Bonde said, "We've always liked the horse. He always finishes well in his races. But he was kind of like a teenager, he hadn't grown into himself mentally. Gary (Stevens) has been working him every week and he's been putting it together and getting better each race. We talked it over and with the speed in the race Gary said he was just going to take back, save all the ground and make one run. That's just what he did."

Right: King of Speed heads back to the barn after the race. Winning jockey Gary Stevens said, "My 100th stakes win at Del Mar, wow! I've liked this colt right from the beginning. I was getting on him early and I told Jeff 'This could be my Del Mar Futurity horse.' But he wasn't doing as well as I thought he should on the dirt, so I said 'Let's try him on the grass.' Jeff did and he responded much better to it. It's a great feeling to be right about something like this every once in a while. He's a nice colt and he's found the place where he wants to be." 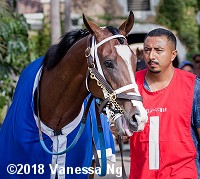 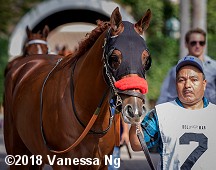 Left: Second place finisher and beaten favorite Hartel in the paddock before the race. Jockey Flavien Prat said, "I had a perfect trip and when the hole opened turning for home, I had to go for it. I had no choice. But now, after the race is run, I'm wondering if it was too soon. What can you do."

Right: Third place finisher Takeo Squared in the paddock. Jockey Rafael Bejarano said, "When we went into the first turn, he tried to jump the fence on me. Then coming through the stretch, that other horse (Hartel) came over and scared my horse. That's why I claimed foul."