It started as another dreary day at Churchill Downs on Saturday with more early morning rainstorms. The track was sealed after Friday's races and no workouts were allowed this morning to try and keep water out of it. Track condition was listed as muddy with the turf yielding at the beginning of the day, but the main track was upgraded to fast by the 6th race due to the clearing weather. Unfortunately, the skies opened up again after the 8th race, downgrading the track to sloppy again. There were five additional stakes on the Kentucky Derby undercard including two grade 1 races, a grade 2, and a grade 3, with several big name horses competing. Here are the results for all five in the order they were run. 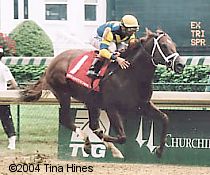 Laura and Eugene Melnyk's swift Speightstown took command shortly after the break and stayed in front the rest of the way to win the $222,300 Churchill Downs Handicap today under jockey John Velazquez. Speightstown, a consistent six-year-old son of Gone West, cruised to the wire 3 1/2 lengths on top, recording a time of 1:21.38 over a main track surface termed "good" after rain today. McCann's Mojave, an invader from California, made a strong move at the winner entering the stretch, but was unable to overhaul him while staying on gamely for second, two lengths ahead of the late-charging Publication. Congaree, the 123 pound highweight and 4-5 favorite, was never able to threaten, finishing a well-beaten fourth in the field of seven horses. Key Deputy was scratched from the original field.

Winning jockey John Velazquez said, "I was talking with Todd [trainer Todd Pletcher] in the paddock and I said that I hope they don't press him today. It turned out to be easier than I thought. Nobody went with me and it made it extremely easy for him."

Jerry Bailey, aboard beaten favorite Congaree, said, "He just didn't want to run today. He was never into the race. He broke OK, but then it was all a struggle. Everything was a huge effort for him this afternoon."
Full results chart from Equibase 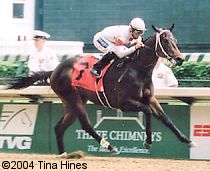 Florida-bred Lunarpal, a speedy son of Successful Appeal owned by Heiligbrodt Racing Stable, cruised to a brilliant victory today in the $110,400 Three Chimneys Juvenile, a supporting feature for two-year-old Thoroughbreds on the day of the 130th Kentucky Derby. Lunarpal, piloted by Shane Sellers, wore down highly regarded filly Classic Elegance entering the stretch, resisted a challenge from stablemate Goes and then drew off impressively to score by five lengths in a fast :57.98 for the five furlongs over a fast track. Closing from far back for second was 11-1 longshot Gallant Secret, with Classic Elegance third and Goes faltering to fourth in the final furlong.

Winning trainer Steve Asmussen said, "This is a very talented horse and I hope we can do well coming out of this race as Todd (Pletcher) did with (Kentucky Derby starter) Limehouse. The way he ran here and with us being here, I definitely want to keep him here."
Full results chart from Equibase 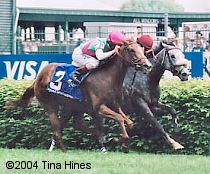 Shaconage, lightly-regarded at 19-1 under jockey Brice Blanc, closed stoutly along the inside to nose out odds-on favored Etoile Montante in the $113,300 Argent Mortgage Stakes for older fillies and mares at a mile on the infield Matt Winn Turf Course today. Etoile Montante, the 3-5 choice under Jerry Bailey, appeared en route to victory in deep stretch until collared and then passed in the final strides by Shaconage, a Kentucky-bred daughter of El Prado. Chance Dance was third, two lengths behind Etoile Montante and a half-length ahead of early pacesetter Sand Springs, who faded to fourth in the field of 10 distaffers.

Winning jockey Brice Blanc said, "I followed Etoile Montante all the way. My filly was traveling very well, and when the rail opened, she dug in and went after the leader. I just had to hand-ride her at the finish. Mitch (trainer Mitch Shirota) had her ready, and she made me look good."

Trainer Mitch Shirota said, "Cha-Ching! I've been coming to Churchill Downs for 20 years now and this is my first stakes win here. To do it on Derby Day is even more special."
Full results chart from Equibase 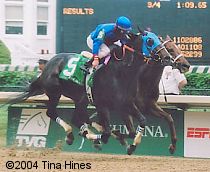 The Grade 1 Humana Distaff Handicap featured a compact field of just four older fillies and mares, competing for a $272,813 purse sprinting 7 furlongs. 2002 Horse of the Year Azeri stalked the pace and got a head in front briefly, but 6-1 third choice Mayo On The Side battled with her through the final 1/8 mile to prevail by a head in 1:22.78. It was a long 7 1/4 lengths back to 3-2 second choice Randaroo in third, who was just a neck in front of 16-1 longest shot Keiai Sakura.

Winning jockey Pat Day said, "My filly broke extremely sharply, jumped into the race and was comfortable at all times."

Azeri's jockey Mike Smith said she was bumped twice by Randaroo. "Still, coming into the stretch, I thought I was going to win," Smith said.
Full results chart from Equibase 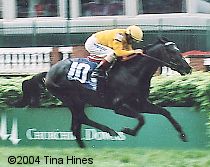 The Grade 1 Woodford Reserve Turf Classic is the second-best race on the card, with eleven older horses traveling 1 1/8 miles on the soggy turf for a $453,900 purse. 9-2 favorite Sweet Return led the pack through a half in 51.04 after which 5-1 third choice Stroll, who had stalked him early on, took over with three furlongs to go and drew clear to win by 2 1/2 lengths in 1:53.00 over the yielding course. It was just a nose back from Sweet Return to 10-1 shot Mystery Giver.

Winning jockey Jerry Bailey said, "When the turf is soft like it was, it's hard to make up ground. He handled the going well and finished up strong." Winning trainer Bill Mott said, "We needed this. It's been too long since we won a race like this."
Full results chart from Equibase