Thursday afternoon and Friday morning before the Kentucky Derby everyone was taking it easy on the backside was as the contenders get ready for the big day. Photographer Tina Hines is there and has sent us a nice selection of photos to enjoy. Click on the smaller image to see a larger version. 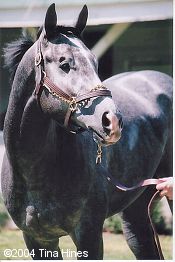 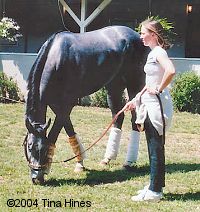 Trainer Kristin Mulhall (shown on the right grazing Imperialism) limited Imperialism's Thursday morning activity to a half-hour visit to the mile chute. Imperialism blew out down the stretch in :24.80 on Wednesday. Mulhall let the Langfuhr colt stand and take in the surroundings and jog at the far end of the chute Thursday. Two-time Kentucky Derby winning rider Kent Desormeaux will be aboard Imperialism, who will break from post 10, a spot that delighted Mulhall and owner Steve Taub. Imperialism has two wins in four starts on wet tracks and Mulhall said the colt galloped well this week over sloppy tracks in the morning and that an off track Saturday would not be a concern.

You can see his bad eye on the right in the close up photo. While he can see from it despite it being set wrong, he races in a full cup blinker to protect it. 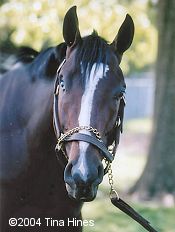 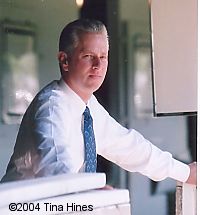 Pollard's Vision is the other vision impared horse in the Derby. He is totally blind in his right eye, which you can easily see in this close-up photo. Trainer Todd Pletcher (right) sent him out for an early morning nuke and a quarter gallop on Thursday with exercise rider Patti Krotenko up. In discussing his two runners, the trainer referred to Pollard's Vision as "my pleasant surprise," while Limehouse was said to "have lived up to his abilities the way we hoped he would." 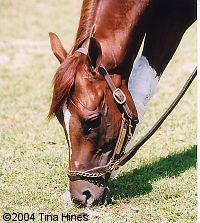 Limehouse is Pletcher's other Derby horse. Exercise rider Michelle Nihei was aboard Limehouse when the chestnut went trackside shortly after 8:15 Thursday morning for a mile and one quarter gallop. 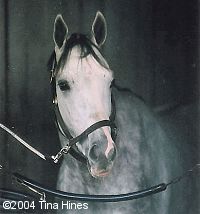 Tapit has been a bit of a mystery since he didn't arrive at Churchill Downs until Wednesday. The gray Pulpit colt was out on the track for some light exercise Thursday morning. With exercise rider Jonathan Ferriday aboard, the Wood Memorial winner visited the gate, jogged a half-mile and galloped one mile around the oval.

Trainer Michael Dickinson has taken every precaution to make Tapit feel as at home as possible, including bringing along large pieces of sod composed of the grasses that the colt munches at home at Tapeta Farm. "My main concern is to get him to the post healthy on Saturday," Dickinson said. "He's healthy right now, but he has to be healthy on Saturday. I want him to peak on Derby Day." 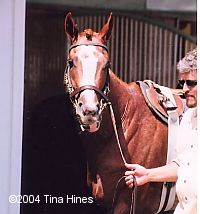 Quintons Gold Rush with trainer Steve Asmussen schooling in the paddock. Asmussen says he tends to get "wound up" before his races, so he has schooled several times in the Churchill Downs paddock in addtion to this visit on Thursday afternoon. Asked if the colt would also school Friday, Asmussen said, "We're trying to get to the point where we won't have to."

"He's doing extremely well, physically," said trainer Steve Asmussen. "The '20' is quite a bit to overcome, but he's a horse who has been programmed to run away from there. If it rains, an off track would help his chances because he's trained well on a wet track." 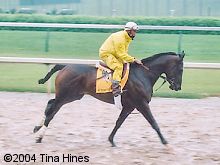 Action This Day braved the nasty wet weather on Friday morning to take his usual jog. Trainer Richard Mandella has finished his hard works and is just keeing his legs stretched at this point. 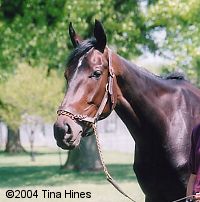 Kentucky Oaks entrant Halfbridled in happier times on Thursday morning. Unfortunately after her Friday morning gallop she tied up and had to be scratched from the Oaks. Hopefully we will see her back again soon at the races.