The final stakes race of the Belmont Park Spring Meeting is the $300,000 Coaching Club American Oaks (G1), the third leg of the New York Triple Tiara, contested at a distance of 1 1/4 miles over the main track. A field of 8 three-year-old fillies went to post on a warm and sunny Saturday afternoon before 6,476 paying spectators. Livin Lovin, fourth in the Acorn Stakes last out in her 2009 debut, was sent off as the even-money favorite over 5-1 second choice Casanova Move, third in her last 2 starts, the Acorn at Belmont and the Black-Eyed Susan at Pimlico, but winless since her career debut last August. 11-2 third choice Hightap, winner of the Iowa Oaks at Prairie Meadows last out, after winning the Dogwood at Churchill Downs, completed the top three on the board.

20-1 Devotee was sent to the front immediately by jockey Mike Luzzi and she set a pace of 23.83, 47.11, and 1:10.76 while being stalked by Casanova Move to her outside just a length behind, and 6-1 Wynning Ride another half length back in third saving ground on the rail. On the turn, Devotee tired and faded to eventually finish last, as jockey Kent Desormeaux sent Wynning Ride to pass Casanova Move to take over the lead through a mile in 1:35.92. Wynning Ride and Casanova Move battled to the 1/8 pole, but 8-1 Funny Moon, who was last for the first 7 furlongs, closed with a rush to get up by a neck over late-running 15-1 Don't Forget Gil in 2:02.44 over the fast main track. It was just 1/2 a length back to Wynning Ride third. Favorite Livin Lovin failed to rally and finished a disappointing 5th. 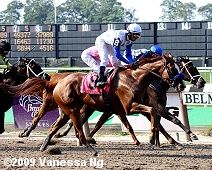 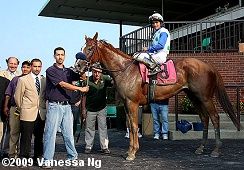 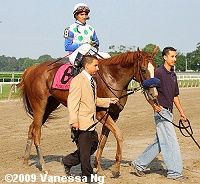 Left: Funny Moon in the winner's circle. Her trainer Christophe Clement said, "I was very disappointed in her performance in the Acorn. We loved the filly beforehand and it's still a bit of a puzzle why she ran so badly that day, but it doesn't matter anymore, she's a Grade 1 winner now. I thought we were definitely in the right spot [today], I even thought that [jockey Alan Garcia] moved a bit early in the turn, but obviously Alan knew more about the race than I did. She's the most lovely mover, my filly. She's very efficient and she has a very long stride. I'm not sure what's next, I want to enjoy this first." 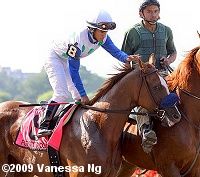 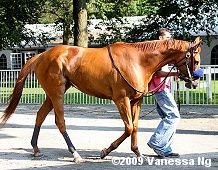 Left: Funny Moon in the post parade. Her jockey Alan Garcia said, "At the 3/8 pole she didn't want to make the turn, she wanted to keep going straight. I tried to correct her because she was getting green at the top of the stretch. I saw I had a little filly left and all the time I was hitting her, she was giving me more. My filly, she gave me the best she had. The only problem was the turn: she didn't want to make it. After that, my filly she was much the best."

Right: Funny Moon in the paddock before the race. 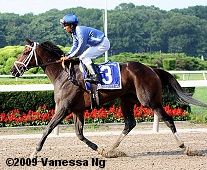 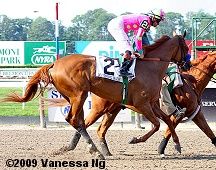 Left: Second place finisher Don't Forget Gil returns after the race. Her trainer Mark Hennig said, "I thought my filly ran great especially considering how close she was to the lead. I was really happy with her effort also because she had been coming off a layoff. The pace was much faster than I thought up front but Rajiv did a good job." Her jockey Rajiv Maragh added, "She ran a big race. I wasn't worried when they were going that fast up front because it set it up for me because I'm a closer. It only enhanced my filly's chances of finishing."

Right: Third place finisher Wynning Ride in the post parade. The 6-1 fourth choice tracked the pace on the inside under new jockey Kent Desormeaux, gained a short lead at the top of the stretch, but was outfinished by the top two in the final 1/16, finishing 3rd beaten just 1/2 a length. The Bob Baffert trained daughter of Candy Ride improved her record to 1 win, 2 seconds, and 1 third in 6 starts, earning $186,608 for owner Arnold Zetcher. 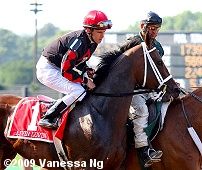 Fifth place finisher and beaten favorite Livin Lovin in the post parade. The even-money favorite raced near the back of the pack early under regular rider Ramon Dominguez, passed tiring horses 4-wide on the turn, but failed to sustain her rally through the stretch finishing 5th beaten 1 3/4 lengths. The Steve Klesaris trainee has a record of 2 wins, 2 seconds, and 0 thirds in 6 starts, earning $158,068 for owners Puglisi Racing and Woodfield Stables.