The $300,000 Coaching Club American Oaks (G1) wraps up the Triple Tiara, which began with the Acorn and the Mother Goose. A crowd of 7,758 was on hand for the last graded stakes race of the Belmont spring meet, with New York racing moving to Saratoga next weekend. With Belmont Stakes winner Rags to Riches not entering due to a fever, a field of seven 3-year-old fillies went to post in this 1 1/4 mile main track feature, with Mother Goose winner Octave sent off as the 1-2 favorite. In to challenge her were 7-2 second choice Folk, a disappointing 10th in the UAE Derby in her last start, after winning both the UAE Oaks and UAE 1000 Guineas in Dubai, and undefeated 4-1 third choice Lear's Princess, making her graded stakes debut after winning the Tweedside last out.

Folk went to the lead under jockey Mike Luzzi and set a slow pace of 23.91, 48.00, 1:12.25, and 1:36.47 while being stalked by favorite Octave just a length and a half behind and to her outside. 20-1 Humble Janet raced close up in third taking the ground-saving path, while Lear's Princess also stayed with the pace in fourth out wide. Entering the stretch, jockey John Velazquez set Octave down for the drive as the favorite collared Folk with a furlong to go. Lear's Princess came out three wide for the drive and joined the battle up front, but Octave dug in late to prevail by 1/2 a length at the line, in a time of 2:02.17 over the fast main track. It was just 3/4 length back to Folk in third, and a long 3 1/4 lengths back to Humble Janet in fourth. 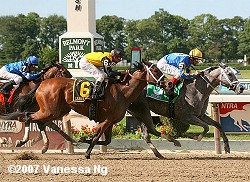 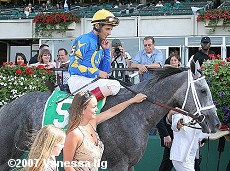 Octave and John Velazquez take their walk down Victory Lane. Velazquez said, "She ran really good. She ran so many races and she had tough beats. But now, she's figured it out and she's won twice. She runs her heart out each time. When she gets to the front, she tends to wait on other horses. But I know she won't let them by." 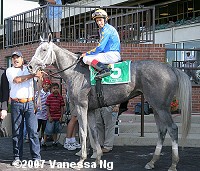 Octave in the winner's circle. Her trainer Todd Pletcher said, "It turned out to be a great race. This filly's been a gem of consistency. Back to back Grade 1 wins three weeks apart is huge. To win the Mother Goose and come back 3 weeks later in the Coaching Club at 1 1/4 miles is a real nice accomplishment. She's had a great career. I thought Johnny (Velazquez) rode her perfectly; he didn't let Folk get away too easy, but he kept her fresh enough to hold off Lear's Princess. We'll keep our options open with her. I'm not sure where she'll go next." 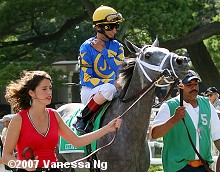 Octave acts up in the paddock before the race. Her owner Jack Wolf of Starlight Stable said, "She was real game coming down the stretch. This horse always makes us hold our breath." 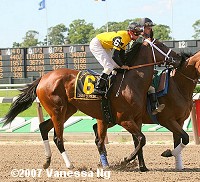 Second place finisher Lear's Princess in the post parade. Her trainer Kiaran McLaughlin said, "Our filly ran a great race. Maybe we'll have to look at the Alabama now. It was a huge race. I was hoping to be third because Grade 1 placing in a race like this is worth so much for her. To run that close to Octave was huge." Jockey Eibar Coa added, "It was a very good effort from her. She handled the dirt fine. Now, they know they can go either way. She was a little bit green today, and she still ran well. In the last 100 yards, I thought I had a chance to win because that is when she got it all together." 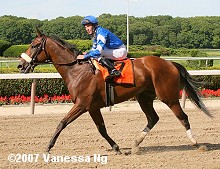 Third place finisher Folk returns after the race. Folk was hustled to the front, set the pace along the rail under jockey Mike Luzzi but could not hold off Octave and Lear's Princess in the lane. The daughter of Quiet American improved her career record to 3 wins, 1 second, and 1 third in 7 starts with earnings of $365,486 for owner Godolphin Racing and trainer Saeed bin Suroor.