Opening day of the 2018 Woodbine Thoroughbred meet featured two stakes races, both on the Polytrack. After experiencing an ice storm earlier in the week, fans and participants enjoyed a beautiful spring day near Toronto's Pearson International Airport, with mostly sunny skies and temperatures in the high 50's with minimal wind. The feature race was the $100,000 Jacques Cartier Stakes for older horses going 6 furlongs. As expected, defending champion and recently crowned 2017 Horse of the Year Pink Lloyd was sent off as the 1-2 favorite in the field of 6. He comes here off the winter layoff, after a perfect 8 for 8 season including the Vigil (G3), the Kenora, and the Kennedy Road (G2) in late November to complete the sweep. Due to his low odds, show wagering was cancelled. In to challenge him included 3-1 second choice Conquest Enforcer, 2nd in an allowance after finishing 11th in the Gulfstream Park Turf Sprint at Gulfstream, and 5-1 third choice Ikerrin Road, 2nd to Pink Lloyd in the Kennedy Road after finishing 4th in the Nearctic (G2).

Jockey Patrick Husbands sent Conquest Enforcer to a clear lead exiting the chute and he set fractions of 21.96 and 44.58 while as many as 1 1/2 lengths ahead of Pink Lloyd stalking him 3 wide, with 13-1 Extravagant Kid another length back in third. Entering the lane, new jockey Rafael Hernandez (replacing the suspended Eurico da Silva) asked Pink Lloyd to move up and the champion easily gained the lead over the tiring Conquest Enforcer through 5f in 56.27. Kept to task by Hernandez, Pink Lloyd easily outfinished Extravagant Kid to win by 3/4 length in a new track record time of 1:08.05, shaving 11/100 seconds off Essence Hit Man's 2011 record. It was another 3 1/4 lengths back to pacesetter Conquest Enforcer third. 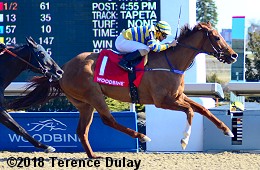 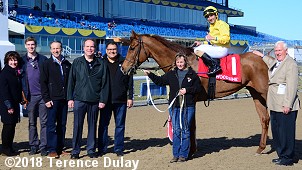 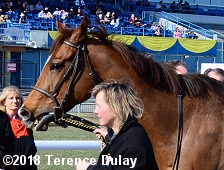 Left: Pink Lloyd in the winner's circle. Winning jockey Rafael Hernandez said, "I've ridden against him and every time he's beat me. He beat me eight times. I finally get on him and I won the race. The main thing was to get him relaxed. We broke out of the gate real sharp and I just wanted to take him back and relax. As soon as he saw Conquest Enforcer in front of the pack, I was loaded all the way and just waited to let him go"

Right: Pink Lloyd heads back to the barn after the race. Winning trainer Bob Tiller said, "I was certainly worried. I worry every time, but at the end of the day that's nine stakes wins in a row. It's really amazing. To winter here at (Paul) Buttigieg's farm and start on him in January, this horse, he's magic. He's a beautiful animal and I don't think that's his best race you saw here today. I want to thank Rafael for the way he rode him here today. He got him off the fence when he had the opportunity. He had everything against him today – the weight, the lay up, the new rider. I texted my son last night about all the things I was worried about and he texted me back and said, 'Dad, he's a champion and champions run.' He's an Ontario horse, an Ontario-sired horse, a Canadian-bred and he deserves to run at Woodbine as long as there's races for him and we're certainly not going to miss those opportunities. We love Canada and we love Woodbine and we love Ontario.” 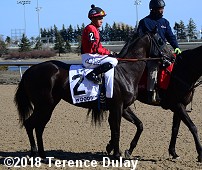 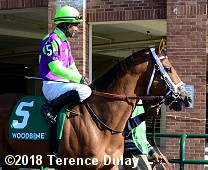 Right: Third place finisher Conquest Enforcer heads out of the paddock before the race. The Mark Casse trainee improved his record to 5 wins, 1 second, and 5 thirds in 16 starts, earning $549,938 for owners Imaginary Stables and Glenn Ellis.

Earlier in the card, a field of 6 three-year-olds faced the starter in the $100,000 Wando Stakes at 1 1/16 miles. Display Stakes runner-up Pipers Warrior was sent off as the 9-5 favorite over 9-4 second choice Machtree, 6th in the Dania Beach (G3) at Gulfstream, and 4-1 third choice Inge, 2nd in an allowance at Oaklawn.

Jockey Gary Boulanger sent Inge loose on the lead first time by through fractions of 24.24, 47.64, and 1:11.91 while pressed by 19-1 Flight Deck and stalked by 6-1 Tale of Vienna. Entering the stretch Inge continued to lead but Machtree, 5th early under Patrick Husbands, rallied on the outside but lugged in late to finish in front going away by 1 3/4 lengths in 1:44.62. It was a neck back to Tale of Vienna third, while favorite Pipers Warrior checked in 5th.

After the race there was about a 15 minute long inquiry as first place finisher Machtree circled while the rest of the horses had all been unsaddled and walked back to the barns. Rafael Hernandez (Pipers Warrior, finished 5th) claimed foul against both Omar Moreno (Tale of Vienna, 3rd) and Patrick Husbands (Machtree, 1st). In addition, Alan Garcia (Titochip, 4th) and Moreno both claimed foul against Husbands. The stewards allowed Hernandez' claim against Moreno but not his claim against Husbands, and allowed Garcia's and Moreno's claims against Husbands. Machtree was disqualified from first and placed 5th, while Tale of Vienna was disqualified from 3rd and placed 4th. The end result being, Inge moved up to the win position, 4th place finisher Titochip gained the place spot, and 5th place finisher Pipers Warrior moved up to show. 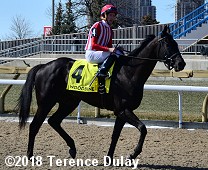 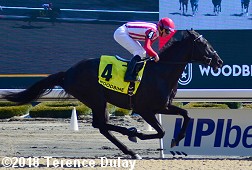 Left: Inge returns after the race. Winning trainer Norm McKnight, who won 3 of the 10 races on Saturday and was Woodbine's leading trainer in 2017, said, "We'll take it. A win’s a win. It's unfortunate for the connections that actually won the race, but that's racing and things happen. We had in mind all along when we claimed the horse that two turns would be good for him."

Right: Inge leads first time by. McKnight added, "We had the Plate in the back of our mind with this horse and we took him to Oaklawn to experiment with that. We had some success but I wasn't satisfied with his races there." 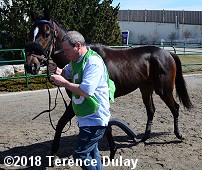 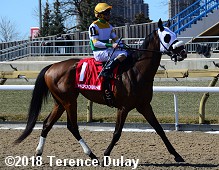 Left: Second place finisher after the DQ Tito Chip walks over before the race. The Pat Parente trainee improved his record to 2 wins, 1 second, and 2 thirds in 5 starts, earning $61,424 for owner Claymore Barns.

Right: Third place finisher after the DQ and beaten favorite Pipers Warrior returns after the race. The Mike De Paulo trainee improved his record to 1 win, 1 second, and 1 third in 5 starts, earning $65,447 for owner-breeder Chiefswood Stable. 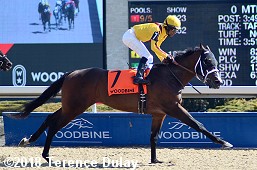 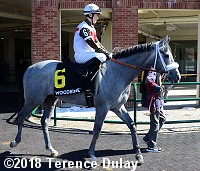 Right: Third place finisher disqualified to 4th Tale of Vienna coming out of the paddock before the race. He has a record of 1 win, 0 seconds, and 1 third in 3 starts, earning $43,955 for co-owner and trainer Laurie Silvera and co-owner Dennis Moss. 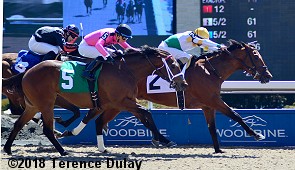 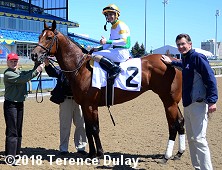 The first race of the 2017 racing season was a 5-furlong $34,000 optional claimer for older Ontario-sired maidens. 11-4 second choice Houdini Affair and jockey Rafael Hernandez took over the lead on the turn and held off late-running 5-2 favorite Mo Gee to win by a neck in 57.96. It was another 3/4 length back to 3-1 third choice Water Polo third.

Winning jockey Rafael Hernandez said, “I won the first race last year on Opening Day. It’s good to start with a win and we’ll see how we do the rest of the day. We had a good trip. The horse was fit and had been running down south at Gulfstream. He did everything right, broke good and kept going.”