The $400,000 Breeders' Stakes is the third and final race of Canada's Triple Crown restricted to 3-year-olds foaled in Canada. A field of 9 contested the 128th renewal of this 1 1/2 mile classic, one complete lap of the E.P. Taylor Turf Course on Sunday afternoon. It was a typical summer day at Woodbine, with partly cloudy skies and a post time temperature of 28 C (82 F), however rain earlier in the day downgraded the Taylor turf course officially "yielding" (however the GoingStick reading of 9.9 falls within "good-to-firm" range), with the non-stakes turf races originally carded on both Taylor and inner courses moved to the main Tapeta. Avie's Flatter was sent off as the even-money favorite off runner-up finishes in both the Queen's Plate and Prince of Wales Stakes. In to challenge him included 5-2 second choice Tone Broke, winner of the Prince of Wales after finishig 3rd in the Plate, and 6-1 third choice He's a Macho Man, 4th in both the Plate and the Prince of Wales. 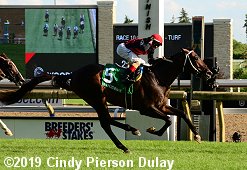 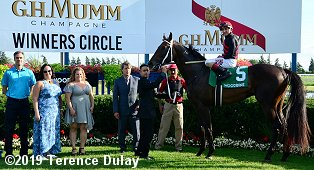 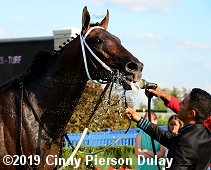 Left: Tone Broke in the winner's circle. Darren Fleming, assistant to winning trainer Steve Asmussen said, "It looked like it was going to be a replay of the Queen's Plate (when he broke inward) a little where he didn't want to relax early, and Raffi got him to relax and everything went smooth. We had a little traffic trouble and my heart was pumping in the turn, but luckily Tone Broke was talented enough to overcome it."

Right: Tone Broke gets a drink while being hosed off after the race. 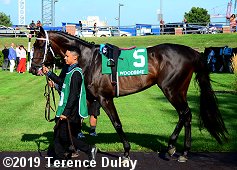 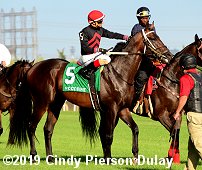 Left: Tone Broke in the paddock before the race. Winning jockey Rafael Hernandez said, "He played around a little bit with the head before the start. My gate crew did a great job. He tried to straighten him up, but they opened the gate so quickly and he just came out with the head high. He gave me a hard time to relax him, but by the first furlong he was relaxed good." This is Hernandez's third Breeders' Stakes win. 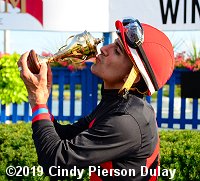 Left: Jockey Rafael Hernandez kisses the trophy after the race. Hernandez added, "I was okay all the way, just at the 3/8 I had to wait, you know, I was stuck there. I tried to move out a little bit and [Pay for Peace] wouldn't give up, he stayed there. I've got a big horse – he's got a big heart – I thought I could move a little bit and it would be okay, but he never gave up and stayed there. It's a good thing we have a long stretch. All you have to do is be patient. I used my patience and as soon as I put him clear, he did the rest. He has a big heart. It's not how you start, it's how you finish."

Right: The horses break from the starting gate for the Breeders' Stakes. 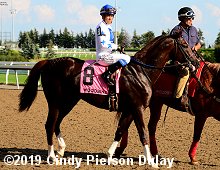 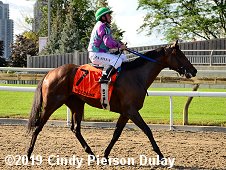 Ninety minutes before the Breeders' Stakes, a field of 7 two-year-old fillies contested the $100,000 Catch a Glimpse Stakes, a 6 1/2 furlong sprint on the E.P. Taylor Turf Course and the main local prep for the Natalma Stakes, a Breeders' Cup Challenge Win and You're In race for the Juvenile Fillies Turf. My Dear Stakes winner Fast Scene was sent off as the 6-5 favorite over two fillies each closing at 3-1, Fair Maiden, winner at second asking at Arlington last out, and Western Taffy, off her debut win at Woodbine.

Jockey Rafael Hernandez sent Fast Scene loose on the lead through fractions of 22.27 and 45.51 whilwe pressed by Fair Maiden and stalked by 21-1 Muskoka Dancer. Turning for home, jockey Emma-Jayne Wilson moved Fair Maiden out for room and she took over at the 3/16 through 3/4 in 1:09.58. Kept to task by Wilson, Fair Maiden drew off late to win by 7 1/2 lengths over Western Taffy in 1:15.64. It was another 1/2 a length back to 16-1 Saratoga Vision third, and 1 1/4 more to tiring favorite Fast Scene fourth. 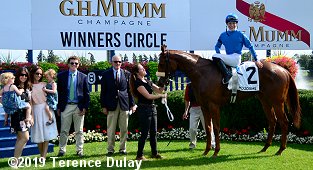 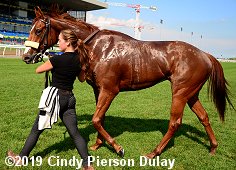 Left: Fair Maiden in the winner's circle. Winning trainer Eoin Harty said, "She's always shown a lot precosity from day one. She's always shown she was a little bit better than the rest of them, but you never know until you actually run them. I think she's something special. She was very impressive breaking her maiden against the boys and I felt confident today that I would have very much a fighting chance. She's kind of going through a growth spurt right now and she's got a bit more leg than she does belly, but I'll go easy on her after this and if she's doing well for the Natalma, she'll be back."

Right: Fair Maiden heads to the barn after the race. Winning jockey Emma-Jayne Wilson said, "She is all class. To have a juvenile come from Arlington, another racetrack, and take it all in as professional as she did today is always impressive." 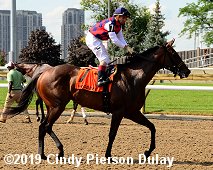 Fourth place finisher and beaten favorite Fast Scene returns after the race. The 6-5 choice set the pace under Rafael Hernandez but tired late to finish 4th beaten 9 1/4 lengths. The Timothy Hamm trainee has a record of 2 wins, 0 seconds, and 0 thirds in 3 starts, earning $81,401 for owner-breeder Three Chimneys Farm and co-owner Blazing Meadows Farm.