The $500,000 Breeders' Stakes is the third and final race of Canada's Triple Crown restricted to 3-year-olds foaled in Canada. A field of 10contested the 122nd renewal of this 1 1/2 mile classic, one complete lap of the E.P. Taylor Turf Course on Sunday afternoon. The turf was firm and the weather was beautiful with clear sunny skies and temperatures close to 80 degrees. Unfortunately, neither Queen's Plate winner Midnight Aria nor Prince of Wales Stakes winner Uncaptured was entered, meaning this year the three races will have three different winners. As expected Up With The Birds was sent off as the 1-2 favorite off his close second in the Queen's Plate after winning the Marine Stakes. In to challenge him included 9-2 second choice Global Express, a maiden winner last out, and 7-1 third choice Pyrite Mountain, winner of the Wando Stakes 3 starts back but 4th in the Plate Trial and 7th in the Plate. 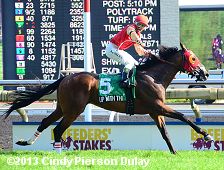 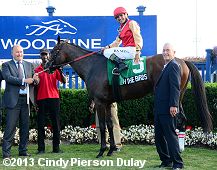 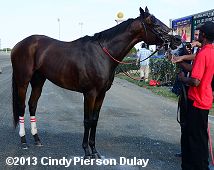 Left: Up With the Birds in the winner's circle with owner Rick Balaz at his head and trainer Malcolm Pierce at his hip. Mark Samuel, CEO of Sam-Son Farms and son of late founder Ernie said, "He was a couple steps away from greatness in the Queen's Plate.   We thought we had a great horse going into that race and he ran a great race.  He proved his class on a different surface.   He's looking like he's very versatile, looks like he can go all sorts of different distances.   I'll wait to pass judgment on where he ranks in the annals of Sam-Son Farm until his career is done.  But he's looking like a special horse."

Right: Up With the Birds gets hosed down after the race. Trainer Malcolm Pierce said, "What can I say, I'm very glad to be back. We always try to freshen our horses and give them lots of time between races.   There would have been more pressure if he had won the Queen's Plate to try for the Triple Crown.   But after getting beat in the Plate, it was an easy decision to wait for this race. He was well-rested and on his toes today. I was a little worried at the head of the stretch that River Seven was giving him all he wanted, but I was relieved in the last 1/8, when he drew away." 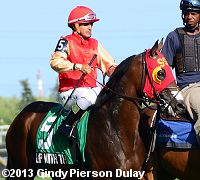 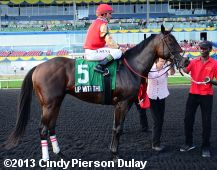 Left: Up With the Birds behind the starting gate. Jockey Eurico Rosa da Silva said, "I had a great trip. He was very aggressive.  He was very keen.  He wanted to be there (up with the leaders).   I think he knew he lost last time (second in the Queen's Plate), so he said, this time, Eurico, I do the job.  When he took the lead, it was hard for another horse to catch him because he wants to take off.  He's all heart.  He's a very good horse."

Right: Up With the Birds returns after the race. 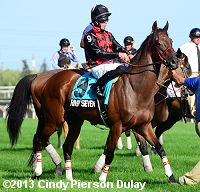 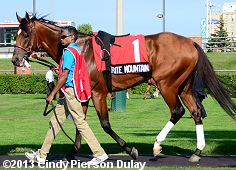 Left: Second place finisher River Seven behind the starting gate. Trainer Nick Gonzalez said, "I knew it was going to be a fight. A lot of the horses in the race were proven accomplished turf horses.  We were experimenting.  But I'm very happy." 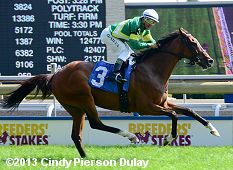 On the undercard, a field of 8 older horses contested the $200,000 Sky Classic Stakes (G2) at 1 1/4 miles on the turf. Last year's winner Forte Dei Marmi was snet off as the 6-5 favorite off his win in the Singspiel (G3). In to challenge him included 5-2 second choice Grand Arch, third in the Nijinsky (G2) last out, and 6-1 filly Irish Mission, a runaway winner in an allowance after disappointing 7th in the Dance Smartly (G2). 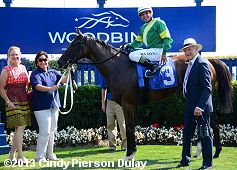 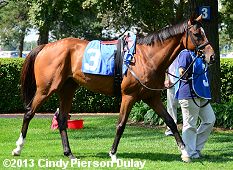 Left: Forte Dei Marmi in the winner's circle with trainer Roger Attfield at his hip. Jockey Eurico Rosa da Silva said, "Roger told me this morning, be sure you sit behind horses. He knows his horse. I let him be very relaxed throughout the race. He's very professional. When he saw the light, he ran very fast."

Right: Forte Dei Marmi in the paddock before the race. Trainer Roger Attfield said, "He didn't ship well to Colonial, so we decided to stay and do it here. I was concerned about the firm turf, but he skipped over it, didn't he? Be patient, keep them happy, and they come through for you." 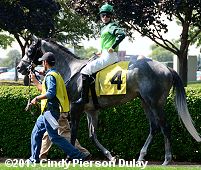 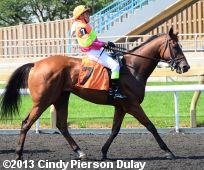 Left: Second place finisher Hampstead Heath in the paddock before the race. The 7-1 fourth choice raced 6th early under jockey Emma-Jayne Wilson, then rallied to get second beaten 2 1/4 lengths. The Brian Lynch trainee improved his record to 3 wins, 4 seconds, and 4 thirds in 12 starts, earning $315,881 for owner Robert Smithen.

Right: Third place finisher Grand Arch returns after the race. The 5-2 second choice contested the pace early under jockey Luis Contreras, gained the lead at the 1/4 pole but tired late to get third beaten 3 1/4 lengths. The Brian Lynch trainee improved his record to 3 wins, 2 seconds, and 4 thirds in 9 starts, earning $179,669 for owners Jim and Susan Hill.