There were two graded stakes events run at Belmont Park on the Friday before the Belmont Stakes. Just 5,415 were on hand on a partly cloudy day with temperatures in the high 70's. The feature event was the $200,000 Brooklyn Handicap (G2) for older horses going 1 1/2 miles, one full lap of the main track. A field of 11 older horses went 1 1/2 miles over the Belmont Park main track under partly cloudy skies before 5,415 fans. Redeemed was sent off as the 2.25-1 favorite off a win the Milesius Stakes at Belmont. In to challenge him included 3-1 second choice Eye on Jacob, winner of an allowance last out, and 9-2 third choice and last year's winner Redeemed, who was second to Redeemed in the Milesius Stakes last out.

Normally a stalker, Redeemed surprised 10 other runners by going right to the front and galloping around virtually unchallenged Friday to win the 124th running of the Grade 2, $200,000 Brooklyn Handicap at Belmont Park. Ridden by Ramon Dominguez for Jay Em Ess Stable and trainer Richard Dutrow, Jr., the 4-year-old son of Include turned back a mild challenge from the 2009 Brooklyn winner Eldaafer and widened through the stretch to a 10-length victory. Eldaafer, racing in his fourth straight Brooklyn to tie a record held by the great gelding Forego, held for second at 26-1, followed by Arthur's Tale. The winner covered the 1 1/2 mile Brooklyn in 2:28.89. With the victory, Redeemed now has won seven of his 12 career starts and earned $712,140. 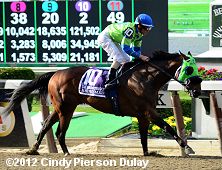 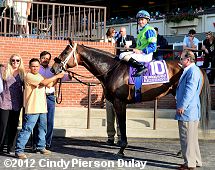 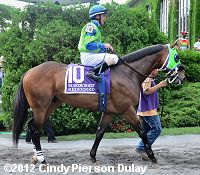 Left: Redeemed in the winner's circle. Winning trainer Richard Dutrow said, "He's been running with good horses, and he's been showing up. I don't know what's next in store for him, but we're going to have to stay after the big races. I'll have a talk with Ramon and see if he wants to go this far all the time; we'll get the numbers, check things out, but we have a live horse, that's for sure."

Left: Redeemed heads out of the paddock before the race. Winning jockey Ramon Dominguez said, "We don't run these distances daily, but I couldn't be any happier with how well he relaxed for me. I felt like I definitely had horse." 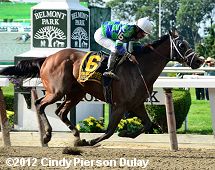 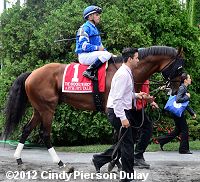 Left: Second place finisher Eldaafer crosses the finish in second place. Eldaafer was fourth in the Brooklyn last year, and had two second place finishes out west in the Turf Paradise Handicap and the Tokyo City Stakes (G3) at Santa Anita before shipping back to Belmont Park for this race.

Right: Third place finisher Arthur's Tale heads out of the paddock before the race. Arthur's Tale broke his maiden on the turf in 2010 and this was his first start back on the grass since then. In his two starts so far this year, he was sixth in the Action Stakes at Aqueduct and third in the Vanlandingham Stakes at Belmont.

Immediately before the Brooklyn, a short field of only 6 turf sprinters went 7 furlongs on the Widener turf in the $150,000 Jaipur Stakes (G3). Bergerac was sent off as the 1.65-1 favorite, coming off a second place finish in the Commonwealth Turf Handicap (G2) at Keeneland. In to challenge him included 1.85-1 second choice Right One , third in the Commonwealth last out and winner of the Jaipur last year, and 5-1 third choice Upgrade, off a fifth place finish in the Fort Marcy (G3).

Upgrade, a 5-year-old gelding from the lone crop of 2005 Horse of the Year Saint Liam, found an open path at the top of the lane and won the seven-furlong turf sprint by three-quarters of a length over 2011 Jaipur winner Right One. Owned by Dennis Narlinger and ridden by John Velazquez, Upgrade won for the second time in two starts since being transferred into the barn of trainer Michelle Nihei. Upgrade ran the Jaipur in 1:21.25 seconds on a firm turf course and paid $12 for a $2 win bet as the 5-1 third choice in the field of six. 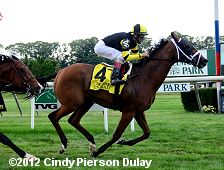 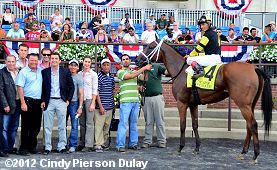 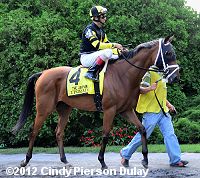 Left: Upgrade in the winner's circle. Winning trainer Michelle Nihei said, "This horse has really deserved this from the day he walked into the barn. It's been a little bit of a roller coaster with that last race. The stretch-out was a little bit too long for him. We'll take a breath, come out of this race and look for something appealing at Saratoga and look for a path that looks obvious between now and [the Breeders' Cup] in November. Mike Narlinger [the son of the owner] really wants to see him run 6 1/2 furlongs down hill at Santa Anita in November."

Right: Upgrade heads out for the post parade. Winning jockey John Velazquez said, "He was going really well the whole way around. I was just hoping I'd get a little room to get him running. After that, he was pretty good. I pulled him out, and I worked him, and he did it pretty easily." 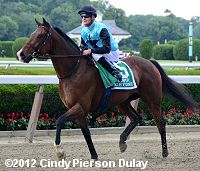 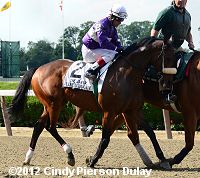 Left: Second place finisher Right One returns after the race. Right One won the Jaipur last year and in his only start of 2012, he finished third in the Commonwealth (G2) at Keeneland. The French-bred gelding raced in France in 2010 before shipping the US in April 2011.

Right: Third place finisher Yield Bogey in the post parade. Yield Bogey lead and faded to second last year in the Jaipur behind Right One. He has been off since October 2011 and this was his first start of 2012.