Of the three Triple Crown races, the undercard of the Belmont Stakes has the most prestigious races on its undercard. This year, the 85,811 on hand were treated to 5 graded stakes which preceded the main event including three Grade 1 events. This was the largest ever Belmont Stakes attendance in a non-Triple Crown year.

Immediately before the Belmont Stakes, wa the $500,000 Woodford Reserve Manhattan Handicap (G1), with a field of 7 older horses going 1 1/4 miles over the inner turf course. Hudson Steele was sent off as the 2-1 favorite off wins in the Henry Clark and the Dixie (G2) both at Pimlico. In to challenge him included 3-1 second choice Brilliant Speed, third in the Woodford Reserve Turf Classic (G1) last out, and 4-1 third choice Omayad, second in an allowance at Hollywood after shipping in from Chile.

Jockey Javier Castellano sent favorite Hudson Steele to the lead first time past the stands and he set easy fractions of 24.62, 49.42, 1:13.61, and 1:36.80 over the firm course, while stalked by 10-1 Papaw Bodie and 6-1 Desert Blanc. Hudson Steele continued to lead to the 1/8 pole, but tired through the final furlong, setting up a sprint to the line between Desert Blanc and Papaw Bodie. Desert Blanc outfinished Papaw Bodie by a nose in a time of 1:59.65. It was another 1 1/2 lengths back to late-running 9-2 fourth choice Boisterous, while Hudson Steele was another nose back in fourth. 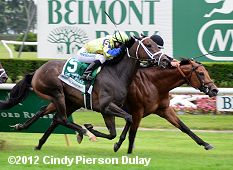 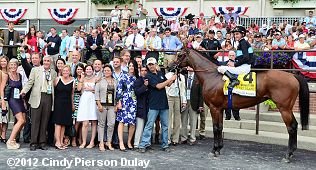 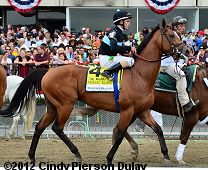 Left: Desert Blanc in the winner's circle. Winning jockey Ramon Dominguez said, "I had a great trip. I was fortunate enough to get in between horses turning for home, and he was pretty determined to get up. I was concerned about the lack of early speed, but I was just trying to do my best to keep him cool and we prevailed at the end."

Right: Desert Blanc in the post parade. Trainer Chad Brown added, "I thought we could move him forward in start No. 2. He's looking for firm ground, and he got it today. It's a wonderful race. I got third [in 2010] with Expansion and got a little taste."


A field of 7 older fillies and mares went 1 mile on the Widener turf course in the $400,000 Just a Game Stakes (G1). Beaugay Stakes (G3) winner Winter Memories was sent off as the 6-5 favorite over 3-1 second choice Tapitsfly, second in the Distaff Turf Mile (G2), and 7-2 third choice Hungry Island, who won the Distaff Turf Mile.

Jockey Ramon Dominguez sent Tapitsfly to the lead exiting the chute and she set quick fractions of 23.47, 46.44, and 1:09.48 over the firm course while stalked by 10-1 Wallis. On the far turn, Tapitfly opened up a 2 length advantage on the field. Winter Memories, 5th early, put in a late rally which proved futile as Tapisfly finished 2 1/4 lengths in front in 1:32.34. It was another 1 3/4 lengths back to Hungry Island third. 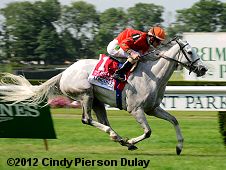 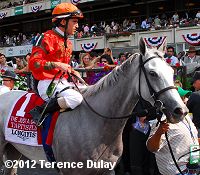 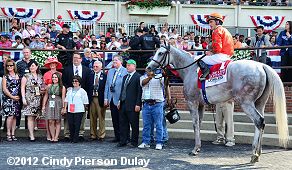 Left: Tapitsfly takes her walk down Victory Lane. Winning trainer Dale Romans said, "She really needed a Grade 1 and deserved a Grade 1. We were thinking about running at Churchill, but I knew we needed to take on the big girls. Very impressive. A mile is her best distance. She's proven that several times. We'll look around the country, but most likely Saratoga. She likes to run and she's just so sound and does things so right. She wants to win. She's competitive. My father trained for (owner Frank Jones) when I was born, so it's always good to win for him. Plus I bought her mother for him as a race filly. She's like a member of the family."

Right: Tapitsfly in the winner's circle. Jockey Ramon Dominguez added, "Dale said to me 'Try to put her on the lead.' It worked out beautifully. She relaxed for me. Turning for home, she gave a great kick. She was moving right along. I'm assuming the turf course is a little bit on the firm side, which contributed to the fractions to not being as slow as you would have thought. She came home very fast, and I guess the final time was very fast, too. In a race like this, you cannot underestimate Hungry Island and Winter Memories; you know they're going to be coming at you." 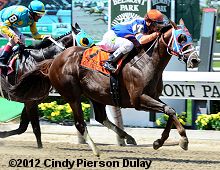 The $250,000 True North Handicap (G2) featured a field of 8 older horses sprinting 6 furlongs on the main track. Charles Town Classic (G3) winner Caixa Eletronica was sent off as the 7-2 favorite off his 4th place finish in the Metropolitan Handicap (G1) last out. In to challenge him included 4-1 second choice Smiling Tiger, 5th in the Churchill Downs Stakes (G2), and 9-2 third choice Pacific Ocean, winner of the Vernon O. Underwood (G3) at Hollywood Park.

Jockey Joel Rosario sent Pacific Ocean to the lead down the backstretch and he set fast fractions of 21.80 and 44.58 while stalked by 6-1 Giant Ryan and 13-1 Justin Phillip. Pacific Ocean tired mid-stretch, as Justin Phillip gained the lead. Caixa Eletronica, last early, closed with a rush through traffic to win by 3/4 length in 1:09.52. It was another 3/4 length back to Smiling Tiger third. The race was marred by the breakdown of Giant Ryan at the 1/8 pole. He was vanned off and sent to the New Bolton Center to have surgery on his broken left front ankle.
Full results chart 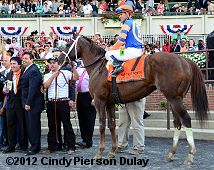 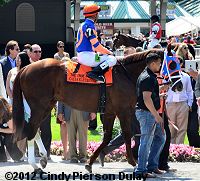 Left: Caixa Eletronica in the winner's circle. Winning owner Mike Repole said, "He's an old knocker. He can win at 6 furlongs, he can win at 1 1/8 miles, he can win a million-dollar race (Charles Town Classic) and he can win a $16,000 starter handicap, this is what horse racing is about. This is a throwback horse to the '60s and '70s. How can you not root for this horse? Running him back on 12 days rest after running against Jackson Bend, Shackleford, Caleb's Posse - and he comes back here. He was flying. He was down by 22 lengths and I thought, 'Maybe running back in 12 days after the Met Mile was not so smart.'"

Right: Caixa Eletronica in the paddock before the race. Jockey Javier Castellano added, "I had a great trip and the race set up perfectly for me. The fractions were what I was hoping for and when I asked him to run, he responded great. He never gave up down the stretch too." 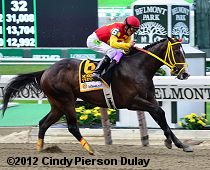 The $250,000 Woody Stephens Stakes (G2) featured three-year-olds sprinting 7 furlongs on the main track. Swale (G3) and Bay Shore (G3) winner Trinniberg was sent off as the 5-2 favorite off his 17th place finish in the Kentucky Derby (G1). In to challenge him included 7-2 second choice Bourbon Courage, 4th in the Derby Trial (G3) last out, and 9-2 third choice Hierro, winner of the Derby Trial. 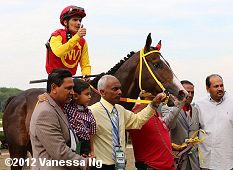 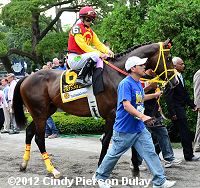 Left: Trinniberg in the winner's circle. Owner Shivananda Parbhoo said, "There's nothing more that we can ask for. I was expecting 44, 1:08. I know this horse is capable of going fast. When they run this hard, you hope they come back good. $400,000, this is the biggest win. I don't think any 3-year-old is going to be able to run with him."

Right: Trinniberg heads out of the paddock before the race. Winning jockey Willie Martinez said, "It doesn't get any better. We're still sad, what happened earlier with Giant Ryan. It's a bittersweet win. I have mixed emotions, but not to take away from Trinniberg's performance. It was unbelievable, as we expected him to do. He was pressed today, he handled it well, and we believe he's one of the top sprinters in the country right now - definitely the best 3-year-old sprinter right now, and he lived up to expectations. It was an amazing ride. I've always been confident in this horse on any kind of surface." 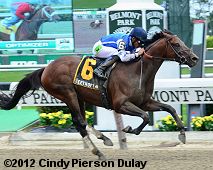 Kicking off the stakes action on Belmont day was the $100,000 Easy Goer Stakes sat 1 1/16 miles around one turn. Teeth of the Dog was sent off as the 2-1 favorite in the field of 9 off his 5th place finish in the Preakness (G1). In to challenge him included 7-2 second choice Inflation Target, second in an allowance last out, and 5-1 third choice Brimstone Island, second in the Canonero II two starts back.

12-1 Romancing the Stone and 7-1 Politicallycorrect battled for the lead for the first 3/4 mile through fast fractions of 22.88, 46.16, and 1:11.47 over the fast track. The speed duel set the race up for the closers, as Teeth of the Dog, 7th early, came through between horses to win going away by 3 3/4 lengths over late-running 27-1 Fast Falcon. It was another 3 1/2 lengths back to Politicallycorrect third.
Full results chart 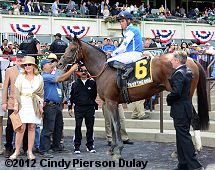 Teeth of the Dog in the winner's circle. Winning trainer Michael Matz said, "We were trying something, but I think we were a little over our head there experience wise. He ran well, but it was only his fifth race. The more he goes the better he's going to get. He's going to be a real nice horse. I think at the end of the year he'll be right there. This gave him a lot of confidence and he showed another dimension that he came real far out of it as well."