There were two graded stakes events run at Belmont Park on the Friday before the Belmont Stakes. Just 5,431 were on hand on a sunny day with temperatures in the high 80's. The feature event was the $150,000 Brooklyn Handicap (G2) for older horses going 1 1/2 miles, one full lap of the main track. Just five went to post in this early prep for the Breeders' Cup Marathon, with last year's Belmont Stakes winner Drosselmeyer sent off as the 5-4 favorite off a win in the One Count Stakes last time out. In to challenge him included 5-2 second choice Birdrun, runner-up in the One Count and winless since the Carl Rose Classic in November at Calder, and 3-1 third choice Eldaafer, an allowance winner last out after disappointing in 6th in the Pan American (G3). 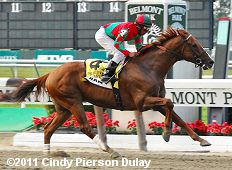 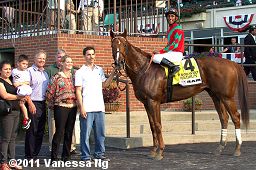 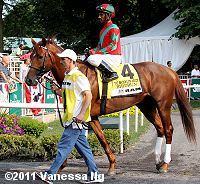 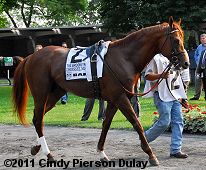 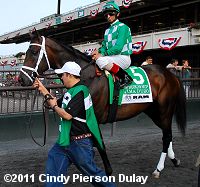 Left: Second place finisher and beaten favorite Drosselmeyer in the paddock before the race. His trainer Bill Mott said, "Drosselmeyer rolled up at the 1/4 pole, but didn't fire his best shot today. Both horses deserved to run today. Jockey Jose Lezcano added, "I actually got a very good trip. I followed the other horse and the pace was very good, and when I asked him the other horse kept going. My horse tried hard. At the 3/8 pole I started asking my horse and he started to pick it up, but the other horse never stopped. He just kept going."

Right: Third place finisher Alma d'Oro in the post parade. The 7-1 fourth choice stalked the pace in third 2 1/2 lengths back early under jockey John Velazquez, but could not improve late to finish third beaten 6 1/4 lengths. The Todd Pletcher trainee improved his record to 6 wins, 3 seconds, and 4 thirds in 21 starts, earning $261,038 for owner Bourque Goldstein Thoroughbreds LLC.

Immediately before the Brooklyn, a field of 5 older horses went to post in the $100,000 Poker Stakes (G3) at 1 mile on the Widener turf course, an early prep for the Breeders' Cup Mile. Courageous Cat was sent off as the 4-5 favorite off his third place finish in the Shadwell Turf Mile (G1) at Keeneland, over 2-1 second choice Right One, winner of three straight including the Island Sun Stakes at Belmont last out, and 6-1 third choice Beau Choix, runner-up in the Island Sun after winning an allowance at Keeneland.

Jockey Edgar Prado sent 21-1 longest shot Yield Bogey to the front and he opened up a 6 length lead on Courageous Cat down the backstretch through an opening quarter of 24.63, with Riviera Cocktail sitting another length back in third. On the turn, Courageous Cat and jockey Jose Lezcano closed the gap to 2 lengths as Yield Bogey got the half in 49.77 and 3/4 in 1:13.43. Courageous Cat drew even with the pacesetter at the 3/16 pole and poked his head in front at the 1/8 pole, drawing off from the tiring Yield Bogey late to win by 2 1/4 lengths in 1:36.69 over the firm course. It was another length back to Right One third. 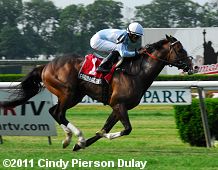 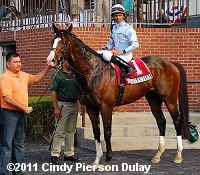 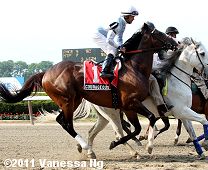 Left: Courageous Cat in the winner's circle. His trainer Bill Mott said, "It's nice to see him close on the fractions. Just a good comeback race. Any time they come off a layoff and run that well, you've got to be pleased. We ran him the in Shadwell Mile and if he ran well we'd have gone in the Breeders' Cup. We didn't go in the Breeders' Cup, so we just gave him a rest. We're having a look at the Shoemaker Mile, which comes up in three weeks. A local start would be the Fourstardave."

Right: Courageous Cat in the post parade. His jockey Jose Lezcano said, "He's a very nice horse to win off the layoff. He sat in a good spot, and I waited for as long I could. He gave me a good kick. I wasn't worried about Yield Bogey. I let him go and waited to make my move." 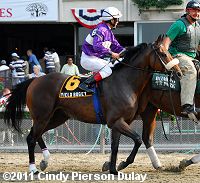 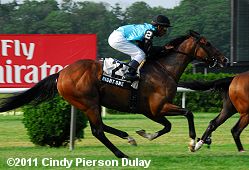 Left: Second place finisher Yield Bogey in the post parade. His jockey Edgar Prado said, "He never quit. It was a very good effort coming off the layoff." The Patrick Kelly trainee improved his record to 4 wins, 3 seconds, and 5 thirds in 23 starts, earning $260,975 for owner-breeder Fox Ridge Farm.

Right: Third place finisher Right One just after the finish. The 2-1 second choice sat fourth early under jockey Rajiv Maragh, then could only pass the tiring Riviera Cocktail late to get third beaten 3 1/4 lengths. The Christophe Clement trainee improved his record to 4 wins, 4 seconds, and 3 thirds in 19 starts, earning $188,974 for owner-breeder Ghislaine Head.