Of the three Triple Crown races, the undercard of the Belmont Stakes has the most prestigious races on its undercard. This year, the 55,779 on hand were treated to 5 graded stakes which preceded the main event including three Grade 1 events. Unfortunately, due to rains earlier in the day as well as during the Just a Game Stakes, the main track was muddy and the turf was good to yielding, with dark clouds overhead the whole card.

Immediately before the Belmont Stakes, a field of 9 older horses contested the $400,000 Manhattan Handicap (G1), a 1 1/4 mile trip over the inner turf course. Gio Ponti was sent off as the 7-5 favorite off a 5th place finish in the Dubai World Cup (G1) and winless since last year's Shadwell Turf Mile (G1). In to challenge him included 4-1 second choice Viscount Nelson, shipping in from Ireland where he won the Silver Stakes at the Curragh on June 3, and 9-2 third choice Prince Will I Am, fifth in the Woodford Reserve Turf Classic (G1) last out.

21-1 Mission Approved went to the lead first time past the stands and set slow fractions of 24.92, 51.47, 1:17.75, and 1:42.44 over the yielding course while as many as 2 lengths in front of 9-1 Straight Story stalking him in second, while Gio Ponti sat at the back of the field. Entering the stretch, Mission Approved opened up a 2 length lead over 32-1 longest shot Bim Bam, as Gio Ponti angled out to the center of the course for room. Mission Approved cruised under the line 1 1/4 lengths in front of Bim Bam, completing the trip in 2:06.32. It was just a head back to late-running favorite Gio Ponti third. 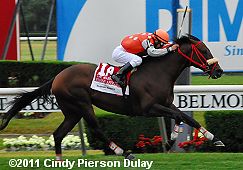 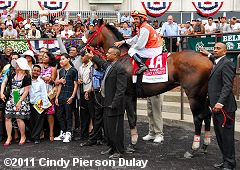 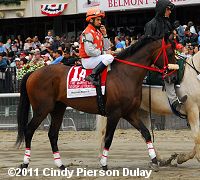 Left: Mission Approved in the winner's circle. His trainer Naipaul Chatterpaul said, "He was off because he had a quarter crack, nothing major. I thought it was best to put him up and wait for this race. I claimed him because I liked the horse - a lot of back class. As long as he's in front, he's not going to give it up. It's awesome. It's the greatest feeling in the world."

Right: Mission Approved in the post parade. His jockey Jose Espinoza said, "The trainer did a very good job with him and he told me was fit coming into the race. He loves this kind of track too. Coming for home, I had plenty of horse because he was just galloping easily on the lead. I was very proud of him today." 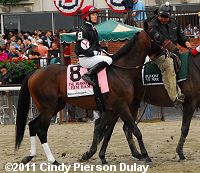 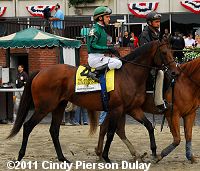 Left: Second place finisher Bim Bam in the post parade. His jockey David Cohen said, "We broke pretty well and I used him a little bit to get to the rail and clear the other horses. From that point on, they slowed it down. It was only (Mission Approved) in front of me. Normally, with a closer and a slow pace, you're hindered because the horse is behind the slow pace and you've got to wait for them to move. But, being in the first flight right behind the leaders, my horse got a clean trip the whole way. The only thing Ron (Moquett) told me was keep after him because he's a horse that's going to keep grinding."

Right: Third place finisher Gio Ponti in the post parade. His jockey Ramon Dominguez said, "I had a great trip and my horse ran an awesome race. It's very soft out there and I feel that in the last 1/16 or so the ground may have gotten to him. Overall, I was very happy with his race." Trainer Christophe Clement added, "This was his first race back from the break. He will improve from this race on firmer ground. He'll be back."


A field of 9 older fillies and mares went 1 mile on the Widener turf course in the $400,000 Just a Game Stakes (G1). Churchill Distaff Turf Mile (G2) winner Aviate was the 3-2 favorite over 9-2 second choice Fantasia, third in the Distaff Turf Mile, and 6-1 third choice Gypsy's Warning, 7th in the Jenny Wiley (G2) at Keeneland.

12-1 C.S. Silk went to the lead exiting the chute and she set easy fractions of 25.24, 50.58, and 1:15.59 over the good turf while being pressed by 9-1 Much Rejoicing a length behind. At the 1/4 pole, Much Rejoicing tired badly allowing C.S. Silk to open up a 2 length lead in mid-stretch. Fantasia closed from last but was left with too much ground to make up as C.S. Silk cruised under the line 3 lengths in front in 1:40.53. It was another length back to 8-1 Amen Hallelujah third, while favorite Aviate was 6th. 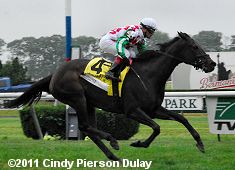 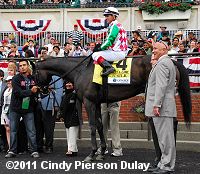 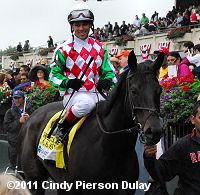 Left: C.S. Silk takes her walk down Victory Lane. Her trainer Dale Romans said, "The turf today suited us perfectly. She's from Medaglia d'Oro's first crop, and everybody knows what his fillies have done. She has 3 or 4 half-brothers and sisters who are stakes horses, and it's huge getting a Grade 1 win with her. We've had her since she was a yearling, and she has been a little bit fickle where she'd throw in a bad race and then throw a good one. We just can't give up on her. She pays you off when she's right."

Right: C.S. Silk in the winner's circle. Her jockey Javier Castellano said, "I know the turf is soft. She loves it; she handled it so well. She was comfortable on the lead. She really enjoyed the trip. It was beautiful. I think the key was getting her to relax. We walked with the 25-second first quarter. The rest was history. When I asked her, it was like I pushed a button and she took off."

Kicking off the stakes action on Belmont day was the $300,000 Acorn Stakes (G1) for 3-year-old fillies going 1 mile around one turn of the main track. Turbulent Descent was the 3-5 favorite in the field of 6 off her consecutive wins in the Santa Anita Oaks (G1) and Beaumont (G2). In to challenge her included 4-1 second choice Savvy Supreme, winner of the Classy Mirage last out, and 6-1 third choice Snow Fall, winner of the Pike Creek. 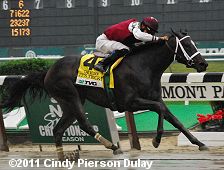 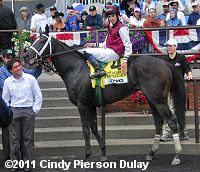 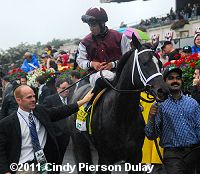 Left: It's Tricky in the winner's circle. Her jockey Eddie Castro said, "She handled (the wet track) really well. I put her where I did in the other two races I rode, and then I waited. When we got in the stretch, she kicked in nicely. She is powerful and has a nice kick."

Right: It's Tricky takes her walk down Victory Lane. Her trainer Kiaran McLaughlin said, "I have to give a lot of credit to Art Magnuson and the staff here because when we went to Florida she just didn't do well. She just didn't do well with the heat.The Mother Goose is back in two weeks; it's a little quick back. We have other races, the Coaching Club American Oaks and Alabama. We'll talk to the Darley people and let them decide." 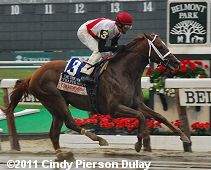 The $250,000 True North Handicap (G2) featured a field of 6 older horses sprinting 6 furlongs on the main track. Waldoboro Stakes winner Trappe Shot was sent off as the 6-5 favorite over the 2-1 entry of Waldoboro runner-up D'Funnybone and Decathlon winner This Ones For Phil, with Calibrachoa the 3-1 third choice off his win in the Tom Fool (G3).

16-1 longest shot Khan of Khans was quickest away and led by 2 1/2 lengths after 1/4 mile in 22.79 before giving up the lead to Trappe Shot approaching the turn. Trappe Shot got the 1/2 in 45.43 as This Ones For Phil moved up to challenge. However, Trappe Shot turned him away drawing clear by 4 lengths in mid-stretch through 5/8 in 56.91 and finishing up under wraps 8 1/2 lengths in front in 1:08.86 over the muddy track. It was just a neck back to late-running Calibrachoa third.
Full results chart 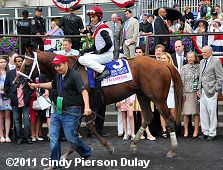 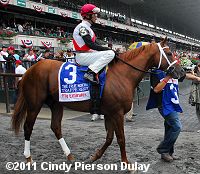 Left: Trappe Shot in the winner's circle. His trainer Kiaran McLaughlin said, "He's a very fast horse and we'll probably keep him to a mile or under. This has just worked out well this year so far. Johnny rode him great, and today was the first time he broke well. Johnny rode him last time and he didn't break well, but that's why he's on him, to help him break better and he did, and he rode a great race. We're looking at possibly the Amsterdam followed by the Forego if that's what we decide to do. We were pointing for this for so long."

Right: Trappe Shot heads out to the track before the race. His jockey John Velazquez said, "It was a perfect trip. He broke well enough and got a good position. When I squeezed him around the 1/4 pole, he responded." 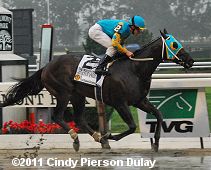 The $250,000 Woody Stephens Stakes (G2) featured three-year-olds sprinting 7 furlongs on the main track. Ziggy's Boy Stakes winner Arch Traveler was the 7-4 favorite in the field of 5 over 2-1 second choice Travelin Man, 6th in the Derby Trial (G3) after winning the Swale (G2), and 7-2 third choice J J's Lucky Train, third in the Derby Trial after winning the Bay Shore (G3).

Jockey Ramon Dominguez sent 9-2 Justin Phillip to the lead down the backstretch and he set fractions of 22.23 and 44.45 while 2 lengths in front of Travelin Man stalking him in second. Into the stretch, Justin Phillip opened up by 5 lengths over the tiring Travelin Man through 3/4 in 1:09.56, and easily held off late-running J J's Lucky Train to win by 3 1/4 lengths in 1:23.56. It was just a nose back to favorite Arch Traveler third.
Full results chart 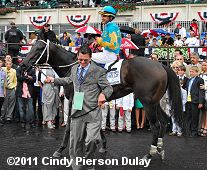 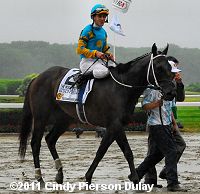 Left: Justin Phillip in the winner's circle. His trainer Steve Asmussen said, "He has run very well on an off track before and everything fell into place today. We thought he was going to lay third and Ramon (Dominguez) said he felt great underneath him and he was just dragging him along. We will speak to Mr. Zayat about where he will go next but it certainly puts the King's Bishop on your calendar."

Right: Justin Phillip returns after the race. His jockey Ramon Dominguez said, "I didn't know whether I'd be in front; certainly second or third. I didn't want to be too far out of it. He was pretty strong and ran a big race. I was very surprised to see the 44 when I came back. He seemed to keep an even pace."