On Saturday, Zenyatta will attempt to complete a perfect career of 20 wins in 20 starts, when she goes for the repeat in the $5 million Breeders' Cup Classic (G1) at Churchill Downs. After galloping twice around the main track on Wednesday morning under exercise rider Steve Willard, she returned to Barn 41 and walked the shedrow to cool down. She was then taken outside for a quick bath and then roamed the large courtyard facing Longfield Avenue to graze, accompanied by groom Mario Espinoza. Owners Ann and Jerry Moss and trainer John Shirreffs supervised the proceedings along with the usual large group of fans and media.

Apparently there is also hope that she could continue to race next year. While we were working on this, we heard a report on TVG that according to an interview with Jerry Moss by Ed Fountaine of the New York Post, there are no plans yet to breed her and it is still possible she could remain in training. He said it was up to his wife Ann to decide.

Click the small picture to see a larger version. 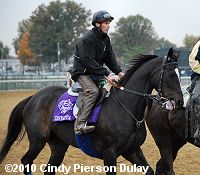 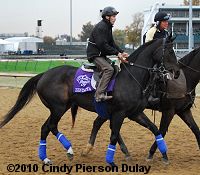 Zenyatta came out and stood in the end of the mile chute for a good while, then started a leisurely walk around the track. Trainer John Shirreffs said, "She did fine. She seems very happy and really got over the track good. They say that the Churchill track is a lot like the Oaklawn track. That's what I've heard, but I'm from California. She seems to like it just fine." 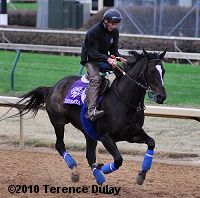 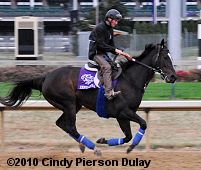 The second time by us she was galloping and her exercise rider Steve Willard had a very tight hold on her. Willard said, "She's terrific. She couldn't be training any better. She loves the dirt. I knew it two years ago and I knew it going into Hot Springs. She drives off it. It doesn't have the trampoline effect like the synthetics." 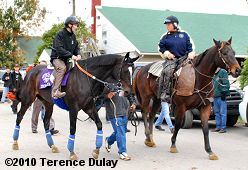 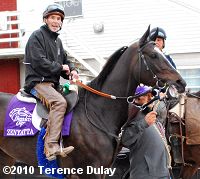 Zenyatta had quite a crowd of people following her as she made her way from the track back to barn 41. Shirreffs said, "I love seeing all the people come out to see her. I think that's what makes her so special and how she will be remembered. Everyone that sees her becomes a fan. We've all become her fans. She's terrific." Willard said, "The crowd was great. They were mostly quiet, a couple yelled, but for the most part very accommodating." 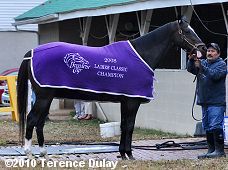 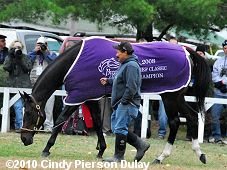 Zenyatta walked the shedrow to cool down, then had a bath with her 2008 Ladies Classic winner's blanket left on her because of the cold weather. After that was finished, she wandered around the grassy area behind Barn 41 and grazed a bit, totally ignoring the crowd watching her. 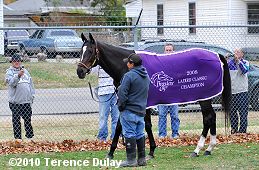 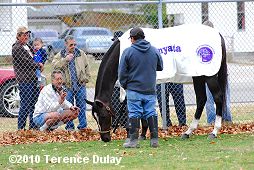 Zenyatta literally stopped traffic, with people pulling to the side of the road to get out and look at her or take her picture. Apparently on Tuesday afternoon she caused a traffic jam on Longfield Avenue because of this. Yes, she did have a costume change and wore two different blankets. 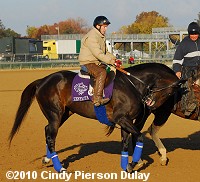 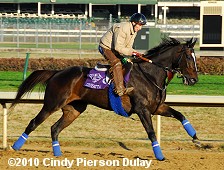 Zenyatta came out again as scheduled at 9:15am, standing at the end of the mile chute for 10 minutes before going for a 1 1/2 mile gallop on the main track under exercise rider Steve Willard. Trainer John Shirreffs said of the defending Classic champion, "She galloped beautifully and she's very happy. On the second day of taking her to the track you might think she'd be a little flat but she was full of energy. Steve said she could have gone around another time. As the trainer that's what you look for, enthusiasm and energy." 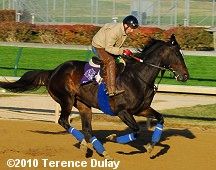 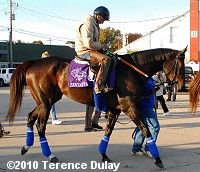 To the left is Zenyatta walking through the barns for her Thursday morning gallop and to the left is another view of her gallop from the mid-backstretch bleachers. At an interview later that morning John Shirreffs said, "Today was a big day, because like I was saying earlier because I expected her to be aggressive yesterday, but then the second day, I thought she might be a little flat and she obviously wasn’t. She was in bridle and wanting to do more." 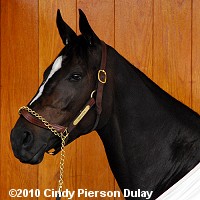 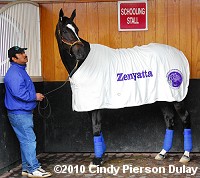 Thursday afternoon, Zenyatta schooled in the paddock during the fourth race. She was escorted in by two county sheriffs and drew quite a crowd both in and around the paddock to watch her. Mostly she just stood in the schooling stall and watched all the silly people, although she did seem to like Jaycito who was in the stall next to her and checked him out through the divider bars.

In an interview on Thursday morning, her trainer John Sherriffs said, "I'm really blessed with Zenyatta because she has a personality that you can share with other people. So when people ask about her, I always say that you need to come and see her. I hope by all these people coming to see her, they will realize what a beautiful, beautiful animal the Thoroughbred horse is. I said it many times before, the Thoroughbred is a very special creature on this earth. A lot people don't have an opportunity to get up close to a Thoroughbred and when they get up close to Zenyatta, a champion, she just has such an aura about her. She has such energy. It's really special. I just hope more people get to see her." 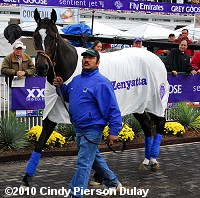 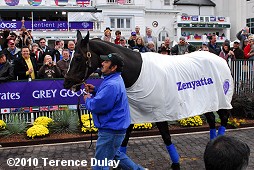 On the right is when she entered the paddock and on the left is when she left. Everyone seemed to want a photo of her and she just ate up all the attention. Shirreffs said, "This is a great celebration. She's the love of our lives She's the fantasy. She's everything we ever could have wanted and to share her with everybody is just incredible. I don't know how to describe the feeling when you bring her over for a race, you can feel the anticipation and energy. So many people adore her so you feel a lot of love too. Your chest swells with pride and you're proud to be with them at that moment." 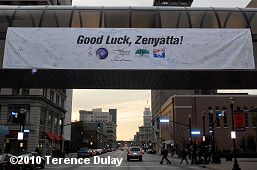 This 7x40 foot "Good Luck, Zenyatta" banner debuted on October 23rd at Hollywood Park, where fans signed it prior to it being transported to Louisville where it hangs on an overhead pedestrian bridge at the intersection of Jefferson St. and 4th St. downtown. You can make out a few of the signatures if you view the huge size version here, although some of the ink has run due to the rain this morning.