On Saturday, Zenyatta will attempt to complete a perfect career of 20 wins in 20 starts, when she goes for the repeat in the $5 million Breeders' Cup Classic (G1) at Churchill Downs. On Tuesday, she made the journey from her Hollywood Park home to Louisville.

On Sunday she jogged a mile over the dirt training track at Hollywood, her last training exercise before leaving California. At 2:00am PT on Tuesday she left her barn to board a chartered Tex Sutton flight from Orange County Airport, with 10 other Southern California-based Breeders' Cup entrants, which left at 5:00am. Her owners Ann and Jerry Moss, trainer John Shirreffs, and racing manager Dottie Ingordo-Shirreffs boarded a private jet, scheduled to arrive in Louisville before the equine charter, while groom Mario Espinoza accompanied her on the flight. The plane landed at 11:30am ET at Louisville International Airport, and she boarded a chartered horse van accompanied by police escort, arriving at Barn 41 on the Churchill Downs backstretch at 11:50am.

Click the small picture to see a larger version. 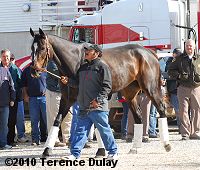 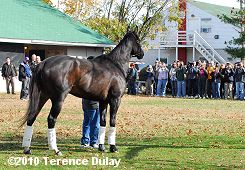 A large group of media, curious onlookers and fans crowded the area where she was unloaded. She circled the paved laneway a few times, and then walked through the barn to the large grassy courtyard facing Longfield Avenue to graze for about 15 minutes. She entertained the crowd by performing her Spanish walk and bowing several times, as well as posing still. Clearly this was the most anticipated arrival at the track in recent memory. There were even some fans on the sidewalk peering through the chain link fence to watch her. She then went to her temporary home, Stall 15 of Barn 41. 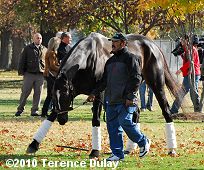 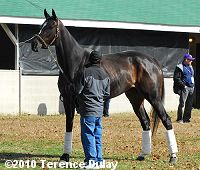 Zenyatta showed off quite a bit doing her Spanish Walk "dance" and posing. Shirreffs said, "She's fine, she's very good." Ann Moss said, "Every day that we are with her is special. She's having such a great time, that we're having a great time. She's so amazing to be around. We feel so blessed." 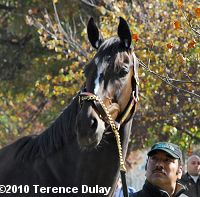 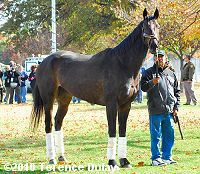 A bit more of Zenyatta posing for everyone. She really knows how to play to the crowd. Shortly after she arrived, she drew post 8 in the Breeders' Cup Classic on Saturday where she is the 8-5 morning line favorite.