The 23rd edition of the Breeders' Cup World Championships has come and gone, and longshots were the order of the day as only 2 favorites won. $20 million in purses were up for grabs, making this the second richest race day in the world behind the Dubai World Cup card. The weather cooperated, with sunny skies early, although clouds rolled in later on, and temperatures were in the 50's. However, Churchill Downs' goal of breaking the Breeders' Cup attendance record was not attained, as only 75,132 spun the turnstiles. They did break the wagering records for both common pool sources with $136,726,378 and on-track handle with $18,259,971. These both eclipsed the previous records by a wide margin.


The main event was the $5 million Breeders' Cup Classic, the richest race in American history. A classy field of 13 went to the gate with the highly touted Bernardini sent off as the 11-10 favorite over 6-1 Lava Man. Longshot Brother Derek set a torrid pace of 46.60 and 1:11.11, which softened up Bernardini, who took over the lead at the top of the stretch but was already tiring as the 7-1 third choice Invasor closed well and passed the heavy favorite inside the 1/16 pole to win by a length in 2:02.18 for the 1 1/4 mile trip. 28-1 Premium Tap finished third.

"We have had a great year, but today was an exceptional ride from the 11 post, to get over," winning trainer Kiaran McLaughlin said. "To be in the two-path around the first-turn was unbelievable. (Jockey Fernando Jara) rode a great race. He has no fear, he's never nervous, and he rides very well with those colors on. Bernardini is a great horse, but there was one better today. Invasor had only been beaten once and he's obviously a great horse, too, and hopefully we'll look back and wonder how I got him beat in Dubai." 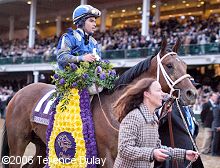 The $3 million Breeders' Cup Turf saw the smallest field of the day, with just eleven making the gate with European invader Hurricane Run sent off as the lukewarm 3-1 favorite. However, the favorite raced mid-pack the whole way but showed nothing late, finishing sixths. 11-1 Red Rocks settled in ninth early well off the pace of Icy Atlantic, came out wide on the turn and closed well through the stretch to win by 1/2 a length over 19-1 Better Talk Now in 2:27.32 for the 1 1/2 miles over the firm turf course. 7-2 English Channel was third.

Winning jockey Frankie Dettori said, "He's a good stayer but he seems to idle a lot of the time in front. I didn't want to take a risk by going through the field and getting stopped so I went wide, and it was just a matter of picking horses off one by one. You ride horses as you feel, and today, when I made my move, he was ready to go and we went together." 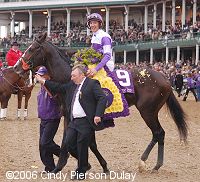 The $2 million Breeders' Cup Distaff saw a full field of fourteen in the gate but unfortunately only 12 completed the trip. 5-2 favorite Fleet Indian was just not herself and was pulled up by jockey Jose Santos on the far turn. 14-1 outsider Round Pond sat in midpack fourth down the backstretch, gained position between horses on the turn, and drew away through the stretch to win by 4 1/4 lengths over Asi Siempre in 1:50.50 for the 1 1/8 mile distance. Asi Siempre was disqualified and placed fourth for interfering with fourth place finisher Balletto who moved up to third behind Happy Ticket who moved up from 3rd to 2nd. Sadly, 3-1 second choice Pine Island broke down at the start of the backstretch and was humanely destroyed.

Winning trainer Michael Matz said, "She was going into this race better than any other that I've had her. She is a very good filly. She's a real winner and she's a champion." Jockey Edgar Prado added, "She was a little anxious, especially on the turns, but she settled in nicely and ran very hard to win." 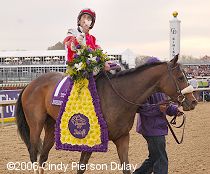 The $2 million Breeders' Cup Mile was a wide-open affair on paper with top turf milers from Europe and America entered, including 3-1 favorite Araafa. However, 24-1 longshot Miesque's Approval stole the show, closing from 13th early to win by 2 3/4 lengths over 4-1 third choice Aragorn in 1:34.75. Araafa suffered from a rough start and never got into it, reaching fourth on the turn but fading to ninth at the finish.

"At the top of the stretch, even though he goes wide, he does better when he's fanned wide," winning trainer Marty Wolfson said. "At the eighth pole I knew he was going to win." Winning owner Charlotte Weber added, "I'd have to say, being the first Breeders' Cup for me, this is right up at the top. We took him here to see how he would do." 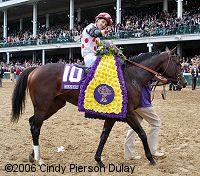 The $2 million Breeders' Cup Sprint is the shortest race on the card but had the longest odds flash on the tote board. When 8-5 favorite Henny Hughes failed to fire, finishing 14th and last, the race was left to the longshots. 16-1 Thor's Echo took over the lead on the far turn and drew away through the stretch to win by 4 lengths in 1:08.80 for the 6 furlong dash. 59-1 Friendly Island was second by a half length over 29-1 Nightmare Affair in third. 4-1 second choice Bordonaro contested the early pace but was passed by the closers to finish fourth.

Winning jockey Corey Nakatani said, "I was on the rail, so my main thing was getting him in the clear. He was traveling so well beneath me and on the backside, I was just looking for the spot to go. He ran a tremendous race. I've always had a tremendous amount of respect for this guy." "He had been training wonderfully coming up to the race, but Corey's ride was the key," trainer Doug O'Neill said. "We were joking about the post, and saying we could sell it to somebody for good money. But in the end, the post turned out to be to our advantage." 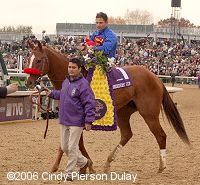 The $2 million Breeders' Cup Filly and Mare Turf saw a favorite come out on top, as international superstar and 2004 winner Ouija Board, sent off at 7-5, ran as expected as jockey Frankie Dettori kept her in midpack in striking position around all three turns, and then when Dettori asked her, she responded with her usual closing kick, taking over the lead inside the 3/16 pole and drawing away to a 2 1/4 length victory in 2:14.55 for the 1 3/8 mile trip. 8-1 shot Film Maker was second, a neck ahead of 9-1 Honey Ryder in third.

Winning jockey Frankie Dettori said, "She's a super mare. She's definitely the best filly in the world, without a doubt." Trainer Ed Dunlop added, "She's the best; there's no other way to say it. She's an absolute champion." Owner Lord Derby said, "It's always a challenge to find that right moment to make a crossover. This mare has quite literally changed the lives of all of the connections. We've traveled the world with this horse a few times over, and I think she deserves the opportunity to retire." 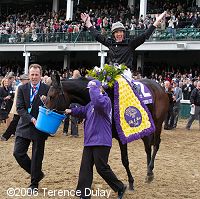 The $2 million Breeders' Cup Juvenile saw fourteen 2-year-old males with 3-1 Circular Quay the favorite. 6-1 Principle Secret set a hot pace of 23.07 and 46.67 but was eased on the far turn and did not finish. 15-1 Street Sense, who raced at the back of the pack early, took full advantage of the hot pace, taking the turn wide to pass tiring horses and drawing away through the stretch to win by a record 10 lengths over favorite Circular Quay in 1:42.59. It was a long 2 1/4 lengths back to 7-1 Great Hunter in third.

Winning jockey Calvin Borel said, "I knew they were going to go a little quick, but he's a push-button horse. When he's right and you ask him, he'll take you there." Trainer Carl Nafzger added, "This is our prep for the Derby. This horse is taking us every step. This horse has been brought here on his own. He's learning, he's growing, he's maturing. He's an exceptional horse." 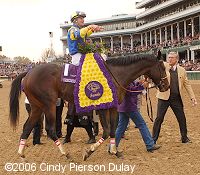 Kicking off the championships was the $2 million Breeders' Cup Juvenile Fillies. 5-2 favorite Dreaming of Anna went to the front right away while taking the first turn four wide, set a pace of 47.96 and 1:23.34 while being challenged the whole way by 21-1 Appealing Zophie, then shook off all comers through the stretch to win by 1 1/2 lengths over 5-1 Octave in 1:43.81. It was another 1 1/4 lengths back to Cotton Blossom in third. 3-1 second choice Cash Included was fifth.

Winning owner Frank Calabrese said, "She can do anything, you can rate her. She's like a car, you push the gas pedal and she goes. She just floats." Trainer Wayne Catalano added, "We knew she could handle grass or dirt, she can do it all. Mr. Calabrese said I'm going to put you on the map, I'm not going to sell this filly. I'm going to race her and take her to all of the big races." 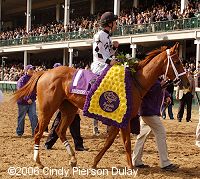