Although the racing takes center stage at the Breeders' Cup, there are other images and events during the day besides the horses. Here is a selection of images from the opening ceremonies and other images from the day. If you want photos from a specific race or the morning works, just use the links above. There are at least eight images from each of the races in addition to the photos below. 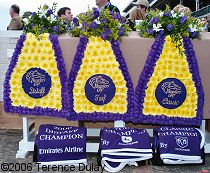 The flowers and winner's blankets for the Distaff, Turf, and Classic wait in the winner's circle before the races. 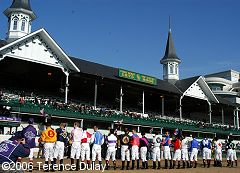 As each jockey's name was called, he ran out on the track waving the flag of his home country. Here they are all lined up in front of the twin spires. 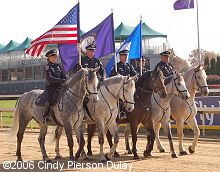 A color guard came down the track to honor all soldiers serving in foreign countries. 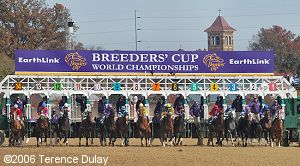 The horses break from the gate for the Breeders' Cup Juvenile Fillies. Eventual winner Dreaming of Anna is on the inside out of gate one. 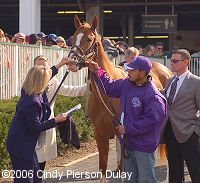 Juvenile Fillies entrant Lilly Carson has her lip tattoo checked by horse identifier Barbara Borden as she enters the paddock. 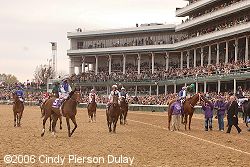 The losing horses return after the Mile to be unsaddled. 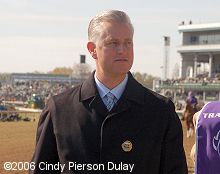 Trainer Todd Pletcher comes over to the paddock for the Juvenile Fillies. He had 18 horses entered, but the best he finished all day was second. 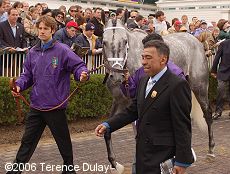 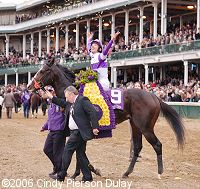 This is one of my favorite shots of the day. Jockey Frankie Dettori tosses up flower petals to celebrate winning his second race of the day while owner J. Paul Reddam leads Red Rocks. 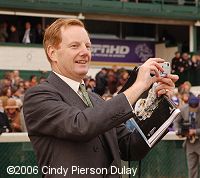 Edward Richard William Stanley, 19th Earl of Derby also known as Lord Derby and the owner of Filly and Mare Turf winner Ouija Board, takes a picture of the replay of the finish of the race on the big TV in the infield. He was quite a shutterbug and was taking pictures of everything. 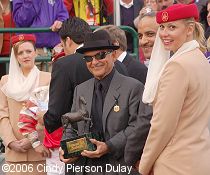 Actor and comedian Joe Pesci presented the trophy for the Distaff and posed here with the Emirates Airlines girls for us. Unfortunately we did not have winner's circle access and due to the design of the winner's circle (faces the stands with a big wall behind it) we could not get any trophy presentation shots. 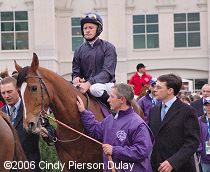 Jockey Mick Kinane and trainer Aidan O'Brien with George Washington in the paddock. Despite all the talk of how good he is, they certainly don't look very confident. He finished sixth. 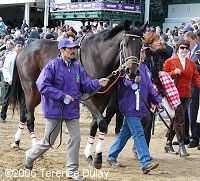 Juvenile winner Street Sense walks over from the backside to the paddock before the race. 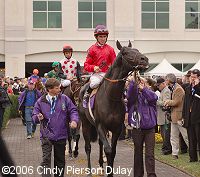 The horses line up to leave the paddock before the Mile. Eventual winner Miesque's Approval is second in line here. 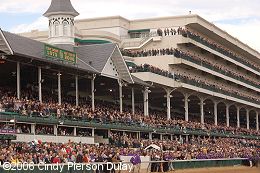 A view of all the fans in the stand watching the running of the Mile while the horses were on the backstretch. 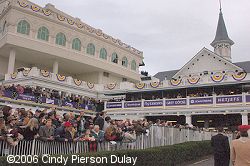 The crowd around the paddock watches the horses for the Classic come in to be saddled. 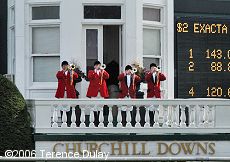