Latest update is here as this page just got too long.
New photo tribute to Barbaro

I was driving home all day Sunday, so today is my first chance to get more info on Barbaro out to you all. Thankfully, he came through his surgery fine and has a fighting chance to recover and live out a full life as a stallion.

After the race, Barbaro was taken back to the stakes barn for x-rays and to get the leg stabilized before he was vanned off to the University of Pennsylvania's New Bolton Center with a police escort. In the van, he was supported by a sling to keep any weight off the leg. Once at New Bolton, he was re-evaluated and the surgery planned for Sunday.

His surgery began at 1pm and took about six hours to complete. He had 3 fractures in the leg, the cannon bone, sesamoids, and long pastern which was in 20 pieces. He also had a dislocation of the fetlock joint. All the bones were set and will fuse fuse over time, although recovery will take months. A locking compression plate and 23 screws were used to stablize the breaks, then a cast was fitted that starts at his hock and completely encloses the hoof. There was much worry about sufficient blood supply to the injured foot, but Dr. Dean Richardson who was the lead surgeon said, "he had good pulses in his feet, good warm periphery. When we did the procedure, he had good blood supply throughout." While the surgery was successful, there is still the possibility of complications such as infection or Barbaro re-injuring himself.

After the surgery, he was standing, eating, and even nipping at the staff attending him and showing interest in some mares nearby. He will wear the current cast for a week to 10 days before he is re-evaluated. You can get the latest updates and photos here from the Baltimore Sun.

5/23 Update: They held a news conference at the hospital this morning to update us on Barbaro's condition and answer questions. Both his main vet, Dr. Richardson, and his owners were there. First off, they said that Barbaro has received numerous cards, emails, and other get well wishes along with many, many apples and carrots. While he gets to eat some of them, there are so many that they are being shared with the other equine patients as well. They have also set up a place where you can send your well wishes direct to the hospital here.

Dr. Richardson said, "Barbaro is doing very well. He's actually better today than he was even yesterday. He's pretty agile, he's done a couple of things that may assess his level of comfort. He was actually scratching his left ear with his left hind leg. When I was working with him this morning he kind of waved at me with his left hind leg which is his good leg. He had absolutely normal vital signs. Temperature, pulse, respiration, appetite." He also said that Barbaro had all his racing shoes pulled when he came to the hospital and is wearing a special extra thick and cushioned glue-on shoe on his left back foot to make that leg the same length as the one in the cast. That will help reduce the risk of laminitis setting in from unequal weight distribution.

His owners, Roy and Gretchen Jackson, were also there. Mr. Jackson said, "I would like to think Dr. Sweeney and Dr. Richardson. I would also like to thank Edgar Prado for pulling the horse up. Wonderful job the outriders did at the Preakness, wonderful job the vets did there. Dr. Scott Palmer, who just happened to be in attendance as a spectator and rolled up his sleeves and helped and was in communication with me. I'd also like to thank the state police and Baltimore police for getting him up here." They both expessed their wishes that Barbaro recover and be pain free, whether he is sound enough for breeding or not. They would love to have little Barbaros around someday but it is more important that he be safe and healthy, so he would go to their farm to live if his leg winds up not being strong enough for the stress of breeding.

5/30 Update: This morning jockey Edgar Prado, owners Roy and Gretchen Jackson, and surgeon Dr. Dean Richardson were on hand for a press conference about Barbaro. I listened in and here are some tidbits from it. Dr. Richardson said Barbaro is very interested in his surroundings, watching everything that is going on and doesn't show any signs of being depressed but instead seems very bright and happy. Dr. Richardson said Barbaro continues to do very well and his chances of surviving improve with every day. Some complications that can occur don't show up until later in the healing, such as laminitis, but more short term complications like serious infection become less likely as the days pass. Dr. Richardson was not willing to give a definite prognosis beyond 50-50, as it just takes time to find out what is going to happen. Barbaro won't ever have normal mobility, but it is possible for his fractures to heal and be as stong or stronger than before. If he heals properly, he will be able to walk, trot, canter, etc., but it won't be smooth since he that ankle will be fused.

Edgar Prado was there for his first visit with Barbaro since the accident. He said he was glad to see Barbaro again and was pleased to see how happy and strong he looked. He said Barbaro is very smart and helped to save himself from more serious injury. He said this week has been really hard and he would have liked to take some time off but instead he decided to go back to riding and keep busy to help keep his mind off things. Prado said when Barbaro broke through the gate, he pushed it open with his head and front leg. He was fine after that and broke good, but it all went wrong about four strides out of the gate.

6/14 Update: Tuesday, June 13, Barbaro had the cast replaced on his leg for the first time since his surgery on May 21. Dr. Dean Richardson said, "His leg looks excellent. The incision has healed well and judging by the radiographs, the graft is opacifying ("taking"). Callus is forming nicely, and all of the implants (plate and screws) look unchanged." The cast was replaced under general anesthesia, and Barbaro had a very smooth pool recovery. Everyone there continues to be pleased with his recovery and progress and he get spoiled regularly with carrots and sugar cube treats.

7/9 Update: It has been an eventful week for Barbaro, and not in a good way. He got a second new cast on July 3 and had two bent screws in his ankle replaced. Then on July 6 he had to get yet another new cast as he was not comfortable in this one. Dr. Dean Richardson, Chief of Surgery, said, "Barbaro was not comfortable with the second cast, so we decided it would be best to replace it sooner rather than later. His appetite is healthy, and we are continuing to monitor him closely for an elevated temperature or other signs of discomfort." At the same time, they found a small abcess in his uninjured hind foot which he was also treated for.

Saturday evening, July 8, they had to replace the plate and many of the screws that had been inserted into Barbaro's injured hind leg on May 21. "Barbaro had developed some discomfort and a consistently elevated temperature so we believed it was in his best interest to remove the hardware and thoroughly clean the site of the infection," said Dr. Richardson. "We also applied a longer cast on that leg for additional support."

While the main fracture is healing well, the pastern joint that doctors are attempting to fuse continues to be the area of concern. This joint was stabilized with new implants and a fresh bone graft. "The recovery process from anesthesia took longer with this surgery, but Barbaro is now back in his stall in the Intensive Care Unit," said Dr. Richardson. "He is receiving pain medication, antibiotics and other supportive care."

These complications are potentially serious, so Barbaro needs all our hopes and prayers.

7/10 Update: Barbaro had his cast replaced again today with a short cast, which makes it easier for him to get around his stall. This was done with him in a sling and only under mild sedation. Dr. Richardson said, "We're continuing his pain medication, antibiotics and other supportive care. He appears more comfortable today and has had a normal temperature, heart rate and overall attitude."

More updates starting with 7/13. Since this page was just getting too long.

Here is a selection of photos of Barbaro from Preakness day, starting with the walk over from the barn and ending with the ambulance. Check the links above for his Derby photos. 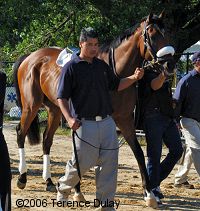 Barbaro walks over from the stakes barn before the Preakness. 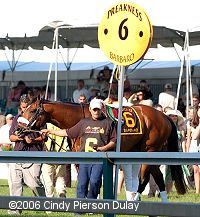 Barbaro being saddled in the infield before the Preakness. 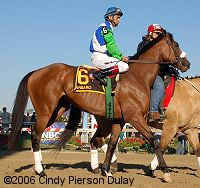 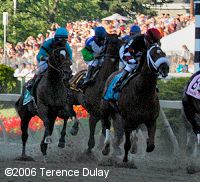 Sorry for how dark it is due to the shadow of the building, but here you can see Barbaro in the back already starting to be pulled up at the 16th pole. Brother Derek is to his left and Diabolical, whose jockey is looking back like he knows something is happening, in front. 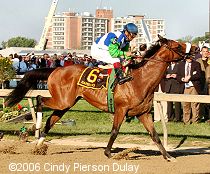 Barbaro shortly after the start of the race being pulled up in obvious distress. This was in the sunny area just past the finish line. You can see how Prado is fighting with him to try and stop him here, but he still wasn't able to stop him for another 100 feet or so past this. If you want a close up look at how bad his ankle was, click here, but be warned as this is a graphic image that will upset some people. 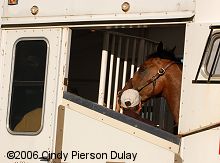 Barbaro in the ambulance as it heads back to the barn after the race.