The highlight race of the Oaklawn Park spring meeting is the $1 million Arkansas Derby (G1), for 3-year-olds run at 1 1/8 miles on closing day and worth 100 points to the winner as part of the Kentucky Derby Championship Series. The estimated 64,500 fans enjoyed partly cloudy skies and temperatures in the mid 50's at the historic Hot Springs oval. Magnum Moon was sent off as the 4-5 favorite in the field of 9, undefeated in 3 career starts including the Rebel (G2) last out. In to challenge him included 11-4 second choice Solomini, second in the Breeders' Cup Juvenile (G1) and the Rebel, and 6-1 third choice Quip, winner of the Tampa Bay Derby (G2).

Jockey Luis Saez sent Magnum Moon to the lead first time by and he set fractions of 23.34, 48.60, and 1:13.39 while pressed by Quip and stalked by 10-1 Tenfold. Entering the lane, Magnum Moon opened up on the field, gaining a 2 length advantage through 1 mile in 1:37.87. Kept to task by Saez, Magnum Moon drew off late to win by 4 lengths over Quip in 1:49.86 over the fast main track. It was a neck back to late-running Solomini third.

Also check out Unbridled Mo winning the Apple Blossom and City Of Light winning the Oaklawn Handicap during the Racing Festival of the South at Oaklawn. 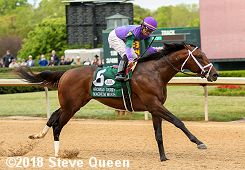 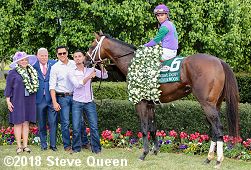 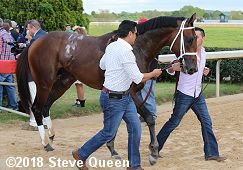 Left: Magnum Moon in the winner's circle. Winning owner Robert Low said, "He had me worried to death when I saw we were on the lead. But Luis (Saez) gave him a masterful ride."

Right: Magnum Moon heads back to the barn. Winning trainer Todd Pletcher said, "I thought it (his race) was very good. Very pleased with the outcome. A little concerned that he drifted out the last part, but it looked liked he sort of halfway thought about jumping over the tire marks when he went the by the eighth pole where the gate was and sort of skipped over those. I think he was maybe just drifting away from that. Aside from that, I thought he finished with good energy and was pulling away from some nice horses. He showed his versatility. He's won a number of different ways now and I think he's proven that he's the kind of horse that doesn't need the race to unfold a certain way, that he's able to kind of make his own race." 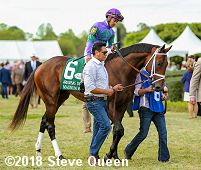 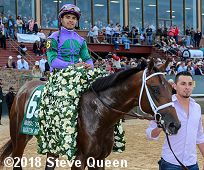 Right: Magnum Moon parades after the race. Winning jockey Luis Saez said, "I thought there was going to be a little speed. We were in a good position he broke really sharp. I'm not going to choke him I am just going to stay there and he was very comfortable into the turn he was traveling pretty good. When I came to the stretch I felt like he was looking at the gate marks so when we got there I touched him a little and he went. We will see what happens." 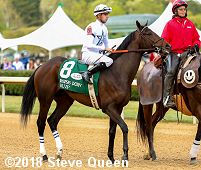 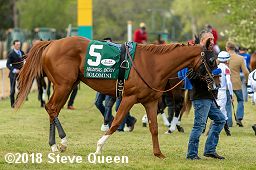 Left: Second place finisher Quip heads out to the post parade. Trainer Rodophe Brisset said, "I guess that's just the way the race set up. We could have tried to go on the lead. I think Florent did the right thing." Jockey Florent Geroux added, "We had a good trip. He always breaks sharp and is always forwardly placed. When Luis (Saez on Magnum Moon) smooched to his horse, I knew he wanted the lead. I let my horse settle and he did very nicely. My horse ran hard. Solomini is a nice horse too. I'm very satisfied with his race."

Right: Third place finisher Solomini in the infield walking ring. Justin Zayat of owner Zayat Stables said, "He didn't break as sharply as we would have liked. He was third best today. The winner is a really nice horse. We'll talk to Bob (Baffert), but I thought it was a good race and now it's on to Kentucky." Jockey Flavien Prat added, "We broke well and then settled off the pace. He ran a nice one." 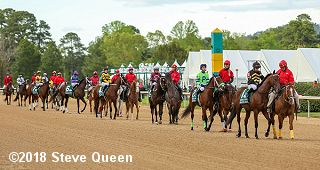 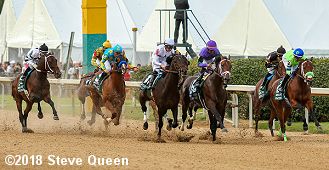 Right: Shortly after the start of the Arkansas Derby. 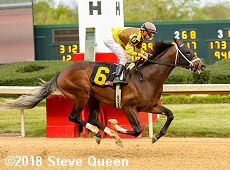 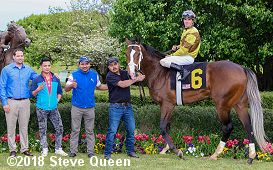 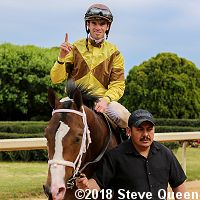 Winning trainer Brad Cox said, "We put blinkers on him, hoping it would put a little more speed into him. It did, obviously. Florent did a good job, knuckling down on him a little bit and getting him into position into the first turn. That's kind of what we were looking for. He really ran well. I was very proud of the performance. We thought a lot of this horse all along." Jockey Florent Geroux added, "It was a nice trip. I was in perfect striking position. The other horse took me earlier than I wanted, but he was feeling good and pulled away at the end."