2018 Oaklawn Racing Festival of the South

The co-feature on Arkansas Derby day, the $750,000 Oaklawn Handicap (G2), featured a field of 11 older horses going 1 1/8 miles on the main track. Accelerate was sent off as the 6-5 favorite off wins in the San Pasqual (G2) and the Santa Anita Handicap (G1). In to challenge him included 7-2 second choice Hedge Fund, winner of the Essex Handicap, and 9-2 third choice City of Light, winner of both the Malibu (G1) and Triple Bend (G1).

Jockey Ricardo Santana Jr. sent 8-1 Untrapped to the lead first time by and he set fractions of 22.97, 46.63, and 1:11.53 while pressed by 32-1 Colonelsdarktemper and stalked by Accelerate. Entering the stretch, jockey Drayden Van Dyke, 4th early aboard City of Light, came out 4 wide for room and swept to the front through 1 mile in 1:36.14. Accelerate and City of Light dueled to the line but City of Light outfinished favorite Accelerate by a neck in 1:48.26 over the fast main track. It was a long 10 lengths back to pacesetter Untrapped third.

Also check out Magnum Moon winning the Arkansas Derby and Unbridled Mo winning the Apple Blossom during the Racing Festival of the South at Oaklawn. 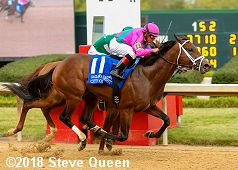 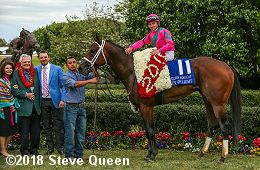 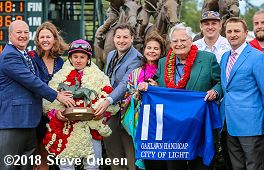 Left: City Of Light in the winner's circle. Winning trainer Mike McCarthy said, "I didn't think the distance would be a problem. I should say this, I didn't think a mile and an eighth would be a problem, the added distance would be a problem. I was a little worried obviously drawing the 11 hole, with the speed inside of us. I was worried about getting caught wide in the first turn. He kind of stumbled stepped out of there and let the other horses get the jump on him. Drayden was able to dictate his trip. He was loaded at the half mile pole. At the time I was nervous, because you worry if they are going to show up after the running starts, but when they got to the quarter pole and Drayden hadn't moved his hands, I had the utmost confidence in my horse."

Right: The trophy presentation for the Oaklawn Handicap with owner William Warren holding the saddle cloth and trainer Mike McCarthy to the right of him. 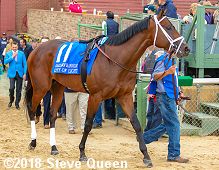 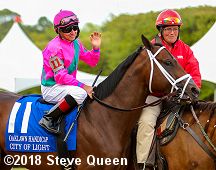 Left: City Of Light comes out of the paddock before the race.

Right: City Of Light in the post parade. Winning jockey Drayden Van Dyke said, "He broke sharp and put me in a good spot. Down the backside he was completely loaded and had a lot of horse the entire way. Just had to wait for the home stretch to let him loose and he did the rest himself. He's a talented horse and glad I could sit on him." 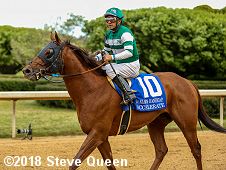 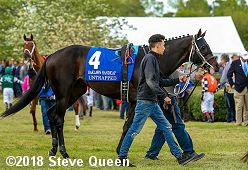 Left: Second place finisher and beaten favorite Accelerate returns after the race. Jockey Victor Espinoza said, "He ran good. It set up like I wanted. He didn't want to load, but broke sharp and I was tracking the leaders. I just couldn't keep up with the winner. He tried to come back pretty good, but I just ran out of room." Trainer John Sadler added, "He's a little gawky. We schooled him at home and he did really well. He's been a little tricky in the gate. I just think he was looking around at this strange environment and 65,000 fans. He broke ok. First time out of town and I thought he ran a great race. I was pleased. Remember, it was a handicap and we were giving away the weight."

Right: Third place finisher Untrapped in the infield walking ring. Jockey Ricardo Santana Jr. said, "He had a good trip. He tried hard, so no excuses. He ran a good race." 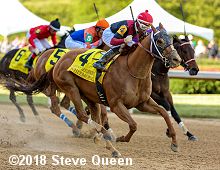 Immediately before the Oaklawn Handicap was the $400,000 Count Fleet Sprint Handicap (G3). A field of 6 older horses sprinted 6 furlongs around one turn of the historic Hot Springs oval, with Breeders' Cup Sprint (G1) 8th place finisher Whitmore sent off as the 4-5 favorite off his win in the Hot Springs Stakes. In to challenge him included 11-4 second choice Wynn Time, 2nd in the Hot Springs, and 4-1 third choice Smart Spree, winner of 4 straight and making his stakes debut here.

Jockey Ramon Vazquez sent Smart Spree to the lead exiting the chute and he set fractions of 21.98 and 45.64 while pressed by 29-1 Wings Locked Up and stalked by Wynn Time. Smart Spree led to the 1/8 pole through 5f in 57.74 but tired. Ricardo Santana Jr. sent Whitmore, last early, out 7 wide for room and he easily outfinished 10-1 Wilbo to win by 3/4 length in 1:09.77. It was a head back to Wynn Time third. 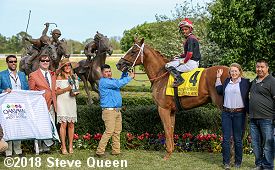 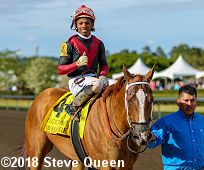 Left: Whitmore in the winner's circle. Winning trainer Ron Moquett said, "I was really happy with how he did it because he didn't have to use him but the last quarter of a mile, so I real proud of the way (Ricardo) Santana rode him. We're going to look at our options, obviously, but we've always wanted to try him at Churchill Downs in one of those stakes races there and hopefully he comes back home there to run in the Breeders' Cup."

Right: Whitmore returns after the race. Winning jockey Ricardo Santana Jr. said, "I rode the horse before and he's a class horse. Today, there was a lot of speed and I wanted to be off of it. His class won out. He ran a really good race. When he got in the clear, he became a different horse. He just blew by them." 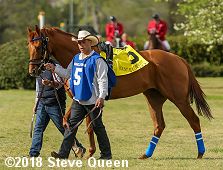 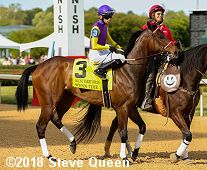 Left: Second place finisher Wilbo in the infield walking ring. Jockey David Cabrera said, "The last time Wilbo ran I kept him back because I was going to try to beat Whitmore. I saw Whitmore today and I guess he got pushed out of the gate so I was pretty comfortable. My horse was so aggressive and he wanted to run so bad. When I turned for I saw I had the other two covered and Whitmore came and nailed me."