On Saturday, a field of 10 three-year-olds went 1 1/16 miles in the $900,000 Rebel Stakes (G2) at Oaklawn Park, the major local prep for the Arkansas Derby and worth 50 points to the winner as part of the Kentucky Derby Championship Series. 37,500 fans packed the historic Hot Springs oval under sunny skies and temperatures in the high 70's, with the track rated fast. Breeders' Cup Juvenile (G1) runner-up Solomini was sent off as the 11-10 favorite off his 3rd placing (finished 1st but disqualified) in the Los Alamitos Futurity (G1). In to challenge him included 3-1 second choice Magnum Moon, undefeated in 2 starts, and 9-2 third choice Sporting Chance, winner of the Hopeful but third in the Southwest (G3). 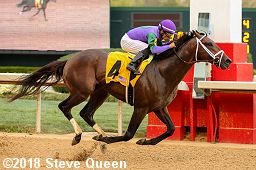 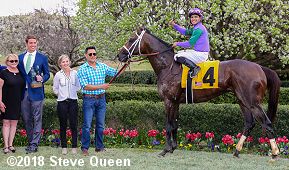 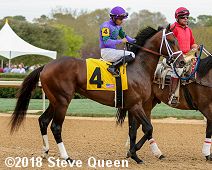 Left: Magnum Moon in the winner's circle. Winning trainer Todd Pletcher said, "We felt like we had a very talented colt. Very pleased with his first two races. But this was a step up in class and running against accomplished, seasoned colts. We were confident that he was training very well, coming into it in great shape and just hoping he could handle the continued rise in class. There's nothing like seeing it actually happen. You can always prepare for it and hope for it and all that. It's still up to the horse to go there out and prove it. Very proud of him for doing it today." He will go next in the Arkansas Derby.

Right: Magnum Moon in the post parade. Winning jockey Luis Saez said, "He was traveling pretty good. He broke good and was in the right spot. When he came to the stretch, he just kept running and never stopped. Well it was magnificent you know. That horse is a pretty good horse. He proved today that he can really run and I don't know. Let's see, hopefully everything will be going good for the Arkansas Derby." Owner Robert Low added, "We're just going to relish this victory and take one (win) at a time. We'll just see how he comes back. Luis, Todd, the whole team did a fantastic job and we're just so proud to be associated with this horse. We'd been communicating with Todd where he was. We were confident, but nervous. He got the job done. Todd is very organized. We knew he had him ready for the race." 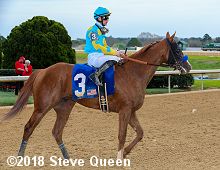 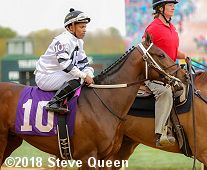 Left: Second place finisher and beaten favorite Solomini returns after the race. Jockey Flavien Prat said, "Had a good race. We had a good trip. We got on the inside and that's not the best for him, but then I wasn't going to keep him off. And he made a nice run. I mean he ran a good second." 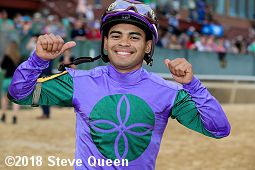 Right: The post parade for the Rebel Stakes. Ricardo Santana Jr. aboard third place finisher Combatant (10) said, "He ran good today again. He doesn't know how to run yet so he is doing better and better every time. He only got beat for a second. He ran good, I am happy how he ran. Steve is happy and the owner is happy and you know we will go from there."

Immediately before the Rebel, a field of 8 older fillies and mares went 1 1/16 miles in the $350,000 Azeri Stakes (G2), the major local prep for the Apple Blossom Handicap. Comely (G3) winner Actress was sent off as the 9-5 favorite exiting her close 2nd in the Houston Ladies' Classic (G3). In to challenge her included 3-1 second choice Martini Glass, winner of the Royal Delta (G3), and 5-1 third choice Blue Prize, winner of the Falls City Handicap (G2). 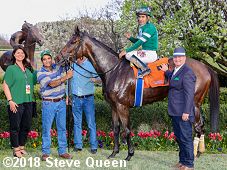 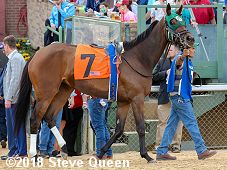 Left: Martini Glass in the winner's circle. Winning trainer Keith Nations said, "She loves to run. She loves to train. She does everything with a lot of enthusiasm. I can just tell she's getting better."

Right: Martini Glass heads out to the track. Winning jockey Paco Lopez said, "The first thing is I loved my position today on the outside. Her domination was great, the trainer did so great. I put on the reign during the first turn and I had perfect position. I didn't have trouble or anything. She is a really nice horse." 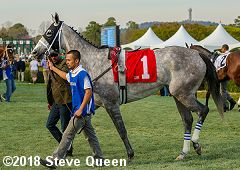 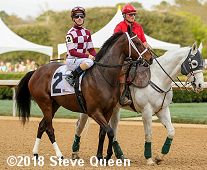 Left: Second place finisher and beaten favorite Actress in the infield saddling area. Jockey Jose Ortiz said, "She actually ran very well. We had a good trip, followed Paco all the way around there. Paco kicked on, nice filly too. And my filly kicked on, but second best today." 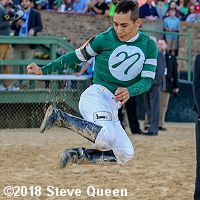 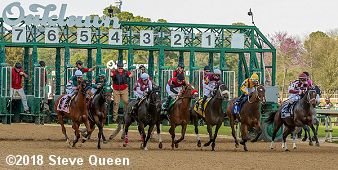 Right: Shortly after the start of the Azeri Stakes.

Kicking off the stakes trio was the $250,000 Essex Handicap for older horses going 1 1/16 miles as a prep for the Oaklawn Handicap. Allowance winner and last year's Illinois Derby (G3) runner-up Hedge Fund was sent off as the 5-2 favorite in the field of 7 over 11-4 Dazzling Gem, an allowance winner last out, and 7-2 Multiplier, 10th in last year's Belmont Stakes (G1).

Left: Hedge Fund in the winner's circle. Winning trainer Todd Pletcher said, "I thought he ran terrific. I was a little concerned. The fractions seemed pretty quick early on and he was sort of under pressure the whole way. It looked like at the top of the stretch they had him collared. He just kept finding more and fought back. Big, big effort for him." He will go next in the Oaklawn Handicap or the Charles Town Classic.

Right: Hedge Fund in the post parade. Winning jockey Jose Ortiz said, "The horse on the outside (Dalmore) moved by the 3/8 pole, so I had to get going. My horse got going at the quarter pole and he really gave me a great run to the wire. I won on him the last time and we did kind of the same thing. I talked to Todd and he said whatever is comfortable. He broke really well and he put himself in the lead. Tried to rate him and tried to go as slow as I could. I saw that I went :46, but he was doing it pretty easy and the track is pretty fast today and he gave me a great run down the stretch."

Shortly after the start of the Essex Handicap.