The $600,000 Alabama Stakes (G1) at Saratoga is the filly equivalent to the Travers Stakes. A field of nine 3-year-old fillies went to the gate in this 1 1/4 mile trip around the main track on Saturday, with Phipps Stable homebred Pine Island sent off as the 6-5 favorite off of two consecutive second place finishes in Grade 1 company, in the Mother Goose and the Coaching Club American Oaks. Delaware Oaks winner Adieu was the 4-1 second choice over 6-1 Wonder Lady Anne L, who defeated Pine Island in the Coaching Club in her last start.

12-1 shot Pyramid Love battled with 15-1 Teammate first time past the stands and around the clubhouse turn through a quarter in 23.58 and a half in 47.31. Midway down the backstretch, jockey Cornelio Velasquez aboard Teammate let the reins loose a bit, and she picked up her pace, pulling ahead to a 1 1/2 length lead after 3/4 in 1:11.84. Turning for home, it looked like Teammate was looking to steal it from the front, and she surged to a 2 1/2-length lead at the quarter pole, running a mile in an easy 1:37.06. However, the favorite Pine Island, who had raced in eighth early, was hitting her best stride and was quickly closing the gap having circled the field 4 wide around the far turn. Pine Island ran right by Teammate at the 70-yard pole and drew off to win by 1 1/4 lengths in a time of 2:02.87 for the 10-furlong trip. It was a long 6 1/2 lengths back to late-running 11-1 Lemons Forever. Adieu disappointed in fifth while Wonder Lady Anne L faded in the stretch and was sixth. 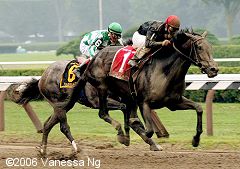 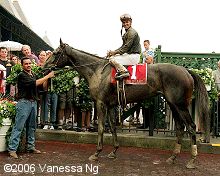 Pine Island in the winner's circle. Winning trainer Shug McGaughey said, "I thought she got into the flow of the race good. They kind of out-sprinted her. (Javier Castellano) had to weave his way around the turn a little bit, which concerned me a bit. But when she got in the clear, I thought she had one horse to run down. I thought she kicked hard the last part of it. She got into a good stride. I'm not sure she got to do that in the Mother Goose or the Coaching Club. Today, her running style was much improved over the other two races. I was glad when she shook clear of the field because I knew she could hit her best stride. She is so big, and if there are horses around her, I'm not sure she can get into the flow like she did today." McGaughey said she would start next in the Gazelle at Belmont or the Spinster at Keeneland. 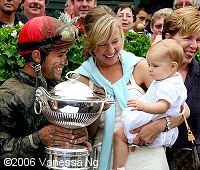 Winning jockey Javier Castellano with his wife and baby who seems to want that nice shiny trophy. Castellano said, "No matter what, I wanted to make one big run with her. She's a big filly with a long stride. Today, she was pretty sharp. She broke well and she wanted to be close. She responded very well. You've got to help her a little bit when she switches leads." 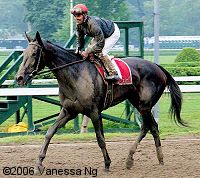 Pine Island and a happy Javier Castellano return after the race. 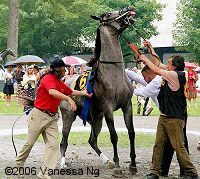 Second place finisher Teammate protests being saddled in the paddock. She looks pretty wild and had to be taken into a stall to finish the job. Her jockey Cornelio Velasquez said, "My filly ran a big race. She had a lot of pressure up to the 5/8 pole and she started pulling away. Pine Island came to get us in the end. She's a nice filly, she's that fast." 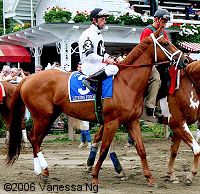 Third place finisher Lemons Forever in the post parade. Her jockey Mark Guidry said, "She's steady. She lost no momentum at all, but she doesn't have that quick burst like the winner has. Dallas has done a great job with her, and getting back to two turns really helped. She's more of a grinder. They were kind of going slow up front, and that didn't help us. She ran a good race. I was happy with her." Trainer Dallas Stewart added, "She tried. She got out-run by two really nice fillies. Obviously, she showed a much better race than she showed in her two previous races. I'm hoping she can knock one of these races again." 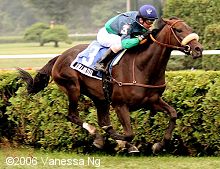 The undercard feature on Alabama Stakes day is the $100,000 Yaddo Handicap for New York-bred older fillies and mares at 1 1/8 miles on the turf. A field of eleven went to the post with Sabellina sent off as the 9-5 favorite. 24-1 outsider Cayuga's Waters set an easy pace while loose on the lead through fractions of 24.17, 49.02, and 1:13.62. Through the stretch, 4-1 second choice Finlandia, who had stalked her the whole way, charged to the front and held off the favorite closing fast late, to prevail by a length in 1:48.70 over the firm course. It was just 1/2 a length back from Sabellina to 6-1 Elisa's Energy in third.
Results chart from Equibase 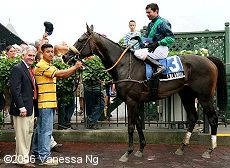 Finlandia in the winner's circle after the Yaddo Stakes. Winning trainer Tom Bush said, "She has run well for us all year. It's all about trips on the turf; today, she got the perfect trip and got the job done. She's sprinted clear coming for home off that slow pace. Kent (Desormeaux) did a great job by not having her too far back. The ride was a big difference." Winning jockey Kent Desormeaux added, "She just ran huge today. Tom (Bush) has done a great job with her. I still don't know how Sabellina beat me last time. I rode her the same way today, and when I asked her turning for home, she just exploded. When Tom gets them good, they stay that way." 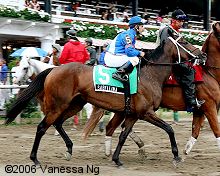