Belmont Park's spring-summer meet closed out on Saturday with the $300,000 Coaching Club American Oaks (G1). Nine three-year-old fillies went to the starting gate in this 1 1/4 mile trip over the muddy, sealed main track, with Mother Goose Stakes runner-up Pine Island sent off as the 6-5 favorite for the perennial New York powerhouse Phipps Stable. Stronach Stables homebred Sugar Shake was the 5-1 second choice, making her stakes debut coming off a 2-race winning streak. Kentucky Oaks winner Lemons Forever was the 6-1 third choice, off her 4th place finish in the Mother Goose last time out.

Sugar Shake and 9-1 shot Wonder Lady Anne L battled on the front end for the first six furlongs, through fractions of 23.88, 47.07, and 1:11.52, with 17-1 Teammate sitting just off of the front-runners on the inside, and a long gap back to the rest of the field. Rounding the far turn, jockey Edgar Prado asked Wonder Lady Anne L for her run and got it, as she took over the lead with 5/16 of a mile to go. At the top of the stretch, Wonder Lady Anne L was 1 1/2 lengths clear after a mile in 1:37.45, while pacesetter Sugar Shake tired from the fast pace and dropped out of contention. Wonder Lady Anne L opened up a 6 length lead with a furlong to go, but she too was tiring as favorite Pine Island, who had raced near the back of the pack down the backstretch, had circled the field five wide on the turn and was quickly closing the gap on the outside. In the final 50 yards, Wonder Lady Anne L dug in and was able to hold off Pine Island to take first prize by 3/4 length in a time of 2:04.63 over the off track. It was 1 3/4 lengths back to late-running 15-1 shot Miss Shop in third, and 6 1/2 more to Lemons Forever in fourth. Sugar Shake disappointed in seventh. 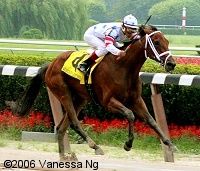 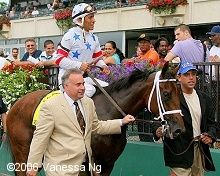 Wonder Lady Anne L and Edgar Prado take their walk down Victory Lane. Prado, who took the Belmont riding title with 65 wins and was voted this year's Mike Venezia Award winner, said, "She took me there every step of the way. I didn't want to be right there early. I wanted to be a few lengths off the lead. She was doing things so easy I just let her do her thing. She took the lead at the top of the stretch, and I just let her run." 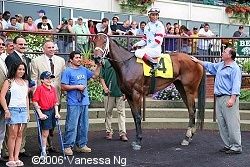 Wonder Lady Anne L in the winner's circle with trainer Richard Dutrow Jr. at her rear. Dutrow said, "I wasn't expecting anything like that, She broke good, Edgar put her right there, and she just stayed there. That was cool." 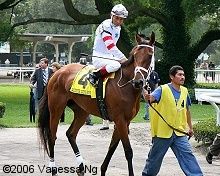 Wonder Lady Anne L in the paddock before the race. 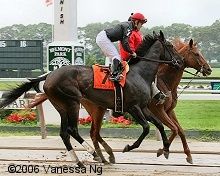 Second place and beaten favorite finisher Pine Island in the post parade. Her trainer Shug McGaughey said, "He kept her outside, which I thought was fine, but we got spun out so far on the turn and she kept coming. This is only her fourth start and to run like that... At the eighth pole I was just hoping she was going to be second. We'll go up the road and hopefully two turns might help us." Pine Island starts next in the Alabama Stakes at Saratoga. 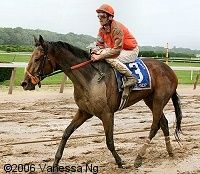 Third place finisher Miss Shop returns after the race covered in mud. She won a turf stakes in her last start. 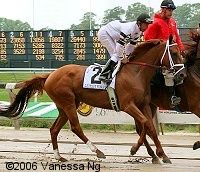 Fourth place finisher and Kentucky Oaks winner Lemons Forever in the post parade. She was also fourth in the Mother Goose Stakes last out. 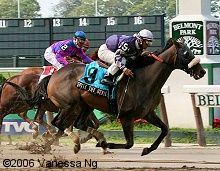 The undercard feature on closing day was the $100,000 Evan Shipman Handicap for New York-bred older horses at 1 1/16 miles on the main track. 10-1 shot Spite The Devil raced behind the field down the backstretch, then came out five wide on the turn, rallying strongly through the stretch to catch 5-2 favorite Organizer inside the 1/16 pole to win by a length in 1:43.79. It was just a neck back to 11-1 Rogue Agent in third. The win is Spite The Devil's eighth in 43 career starts, with earnings of $841,919. New York racing moves upstate to Saratoga starting on Wednesday.
Results chart from Equibase 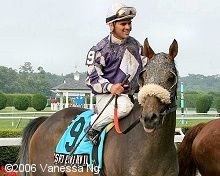 Javier Castellano is all smiles as he returns after the race aboard Spite the Devil. 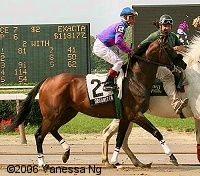