The premier race for older fillies and mares during the Santa Anita fall meet is the $250,000 Zenyatta Stakes (G1), a 1 1/16 mile main track trip with the winner earning automatic entry into the Breeders' Cup Distaff (formerly Ladies' Classic). Santa Anita Oaks (G1) winner Beholder was sent off as the 8-5 favorite in the field of 7, off her win in the Torrey Pines at Del Mar. In to challenge her included 5-2 second choice Joyful Victory, winner of the Molly Pitcher (G2) at Monmouth, and 9-2 third choice Authenticity, second in the Personal Ensign (G1) after winning the Shuvee (G3). 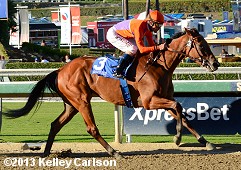 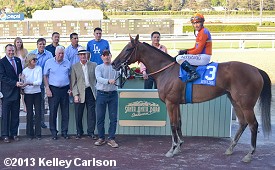 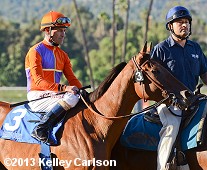 Left: Beholder in the winner's circle. Trainer Richard Mandella said, "I didn't have any trouble. It looked as easy as it appeared. Gary is a great rider. He always has been,but I don't want to take away from the filly. The filly's very special. I'm very proud of her. She'll go in the Distaff after this. She's just a filly that really likes the fight. She likes going to battle and it comes out when the race is run." Owner B. Wayne Hughes added, "Our whole goal this year was to get to the Breeders' Cup again. So Richard Mandella did a great job picking the races and the pace and everything else. We were happy to be here and it was nice to win."

Right: Beholder in the post parade. Jockey Gary Stevens said, "They have done such a good job with her, she's really matured from what I've seen just being a fan of hers and then being able to ride her right now. I just try and stay out of her way. She's particular about what she wants and as long as she gets it she's easy to deal with. When she swaps leads coming off the turn she lunges and it's like she covers two lengths of what a normal stride is. I haven't got close to the bottom of her yet. Maybe there's not as much there as I think but it feels like there is still another gear." 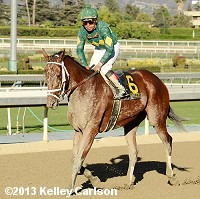 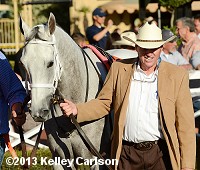 Left: Second place finisher Authenticity returns after the race. Jockey Martin Garcia said, "I had a good filly. I just got beat by a good filly, too. I expected a little bit more speed, but it didn't go like I wanted. But I was that close. When I asked her to go, she did go, but the other went better. A little bit more distance and my filly would be much better."

Right: Third place finisher Joyful Victory in the paddock with trainer Larry Jones. Jones said, "It was a good horse race. No excuses. We had a good clean trip. We had to run a little. It's been a long time since we raced. We set this up on purpose knowing we'd fire back pretty quick for the Breeders' Cup. If all goes well, she gets back to Churchill well, we'll be back." Jockey Rosie Napravnik added, "We were working much harder than everybody else around both turns and that probably cost us quite a bit; we were at a big disadvantage on both turns. The pace did slow a bit and she likes to run freely but she still ran a good race today."

The $250,000 Rodeo Drive Stakes (G1) features older fillies and mares going 1 1/4 miles on the turf, looking for automatic entry into the Breeders' Cup Filly and Mare Turf. Last year's winner Marketing Mix was sent off as the 6-5 favorite in the field of 7 off her fourth place finish in the Beverly D (G1) last out. In to challenge her included 8-5 second choice Tiz Flirtatious, winner of the John C. Mabee (G2), and 6-1 third choice Lady of Shamrock, second in the John C. Mabee and the New York Stakes (G2).

Jockey Victor Espinoza sent 28-1 longest shot Vionnet to the lead immediately and she set easy fractions of 25.39, 48.84, 1:12.92, and 1:36.34 over the firm course while as many as 3 1/2 lengths in front of Marketing Mix in second. Vionnet continued to lead to mid-stretch, but Marketing Mix from second and Tiz Flirtatious from fourth began to close the gap. Tiz Flirtatious outfinished Marketing Mix by a head for the win in 1:58.98. It was just 1/2 a length back to pacesetter Vionnet third. 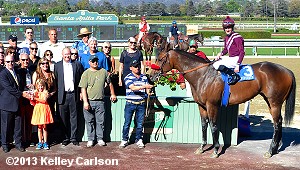 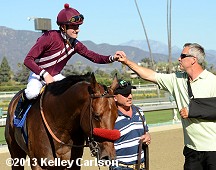 Left: Tiz Flirtatious in the winner's circle. Trainer Martin Jones said, "This horse is something else. She deserved this today because she's been so close in Grade I's. What a feeling. I was a little hesitant there at the top of the stretch but she got the win. Hopefully she comes out of this race good." Owner-breeder Pam Ziebarth added, "Earlier in her career someone asked me, ‘is this the nicest filly you've had,' and I said Healthy Addiction would probably take that ticket but Marty says, 'we're working on it,' and I'd say she's there now."

Right: Julian Leparoux celebrates aboard Tiz Flirtatious after the race. Leparoux said, "She finished strong. She had to fight because those other fillies did not stop. It was a good race for her and she got the Grade 1 she deserves. I think she has a great chance for the Breeders' Cup. We knew she was really good but it was nice to see her handle the distance. I was a little concerned with (Vionnet). Victor's filly was running really well, actually, the first three ran really well and finished very fast. 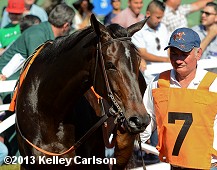 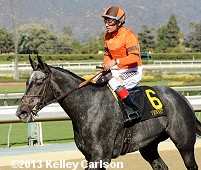 Left: Second place finisher Marketing Mix in the paddock before the race. Jockey Gary Stevens said, "I think this set us up pretty well going forward. She ran her race today, we just got out-kicked. It was a funny run race, hopefully there will be more pace in the Breeders' Cup."

Right: Third place finisher Vionnet returns after the race. Trainer Richard Mandella said, "It went well for us today. We could see that there wasn't any pace. Our filly is a little inexperienced with this kind of group so we thought we might give it a try and I couldn't be prouder. She ran her heart out." 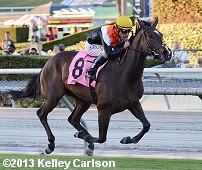 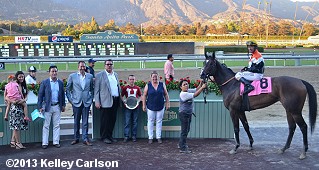 Closing out the race card on Saturday was the $70,000 Unzip Me Stakes for 3-year-old fillies sprinting 6 1/2 furlongs on the downhill turf. Judy in Disguise was the 3-1 favorite in the field of 12 over 7-2 Heir Kitty and 4-1 Unusual Way.