Not counting Breeders' Cup, the highlight race of the Santa Anita fall meeting is the $250,000 Awesome Again Stakes (G1), featuring the best older horses of the west coast going 1 1/8 miles on the main track, and is a Breeders' Cup Challenge "Win and You're In" qualifier for the Classic. Just 12,216 fans came to the Arcadia oval on Saturday afternoon under sunny skies and temperatures in the low 90's. Mucho Macho Man was sent off as the 8-5 favorite in the field of 10, off consecutive third place finishes in both the Criminal Type at Belmont and the Whitney Invitational (G1) at Saratoga. In to challenge him included 7-2 second choice Paynter, fifth in the Woodward (G1), and 9-2 third choice Golden Ticket, winner of the Prairie Meadows Handicap after finishing second in the Stephen Foster (G1).

26-1 Summer Hit went to the lead first time by and set fractions of 22.95 and 47.45 while stgalked by 37-1 longest shot Chief Havoc. On the far turn, Summer Hit tired as Chief Havoc inherited the lead through 3/4 in 1:11.48. Entering the stretch, Mucho Macho Man and new jockey Gary Stevens, wide and 5th early, circled the pacesetters to gain the lead, quickly opening up by 3 lengths through 1 mile in 1:35.74. Paynter, fourth early, put in a late rally but was no match for Mucho Macho Man who cruised past the post 4 1/4 lengths in front in 1:48.30 over the fast track. It was another 2 1/4 lengths back to 23-1 Soi Phet third. 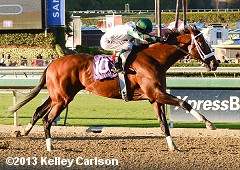 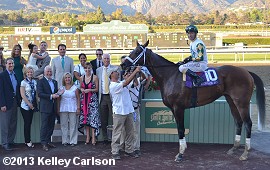 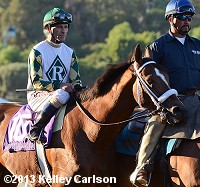 Left: Mucho Macho Man in the winner's circle. Winning trainer Kathy Ritvo said, "I just hope we can get ready for the (Breeders' Cup) races. He's doing great. I don't know what else to say right now. He's doing real well. I don't think it made much difference (to ship early). He's a runner. He travels well. He seems to thrive here." Finn Green, racing manager for ownership group Reeves Thoroughbred Racing said, "Fabulous. It was a great ride. We told Gary he'd been on some great horses and we hoped we were putting him on a great horse today. He was excited. We were all excited. The horse travels well. We shipped once early to Churchill for the Alysheba and the track was not to his liking and we trained there too long. But he loves this race track."

Right: Mucho Macho Man in the post parade. Jockey Gary Stevens said, "The race was pretty much over at the 3/8 pole. He has a tremendous stride and he runs the turns really well. He's very athletic. I let him stretch himself a little at the 3/8 pole and had him pick it up again at the 1/4 pole. Had the race been 1 1/4 I probably wouldn't have been as aggressive as I was but they told me to get a good race in and get a good gallop out of him afterwards, which I did. This horse only has to make up a neck from last year's Breeders' Cup Classic and I think he's a bigger, stronger horse than he was last year." 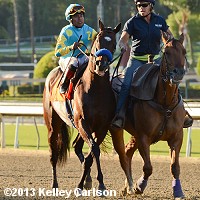 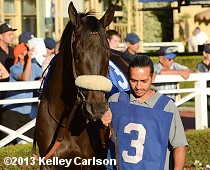 Left: Second place finisher Paynter in the post parade. Trainer Bob Baffert said, "I think he ran well. He was behind there. He took a lot of dirt; actually he settled pretty well and came wide. He was finishing up really well. The winner ran a big race. He will continue on to the Breeders' Cup Classic. I liked his race."

Right: Third place finisher Soi Phet in the paddock before the race. Trainer Leonard Powell said, "The race set up for us similar to what we thought it would. We wanted to be close to the pace like we were. The outside covered us into the first turn, but (jockey Irving Orozco) did a good job of getting off the rail, and getting a clean trip. Mucho Macho Man came up on our outside and we got caught a bit flat-footed, but then after that he was game until the end."

The first stakes race on Breeders' Cup "Win and You're In" Day at Santa Anita was the $250,000 Chandelier Stakes (G1) for 2-year-old fillings going 1 1/16 miles looking for automatic entry into the Breeders' Cup Juvenile Fillies. Fascinating was sent off as the 6-5 favorite in the field of 7 off her close second in the Del Mar Debutante (G1). In to challenge her included 2-1 second choice She's a Tiger, winner of the Del Mar Debutante after a close second in the Sorrento (G2), and 6-1 third choice Awesome Baby, seventh in the Del Mar Debutante after a 4 3/4 length romp in her debut.

52-1 longest shot Harlington's Rose was quickest away through an opening quarter of 22.80 before Awesome Baby took over the lead through a half in 46.25, while stalked by She's a Tiger and Harlington's Rose. On the far turn, She's a Tiger pulled away from the field, opening up a 2 1/2 length advantage through 3/4 in 1:10.27. 10-1 Secret Compass, fourth early, came on late and outfinished She's a Tiger through the final 1/16 mile to win by a head in 1:44.91. It was another 3/4 length back to late-running favorite Fascinating. 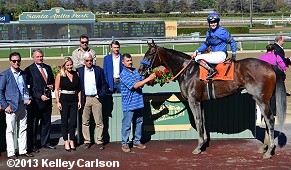 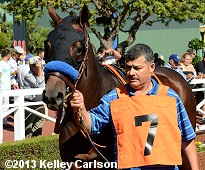 Left: Secret Compass in the winner's circle. Trainer Bob Baffert said, "She was very disappointing at Del Mar. Today she had to gut it out down stretch, but I always thought she'd be better going two turns. Rosie was open and I needed a rider, so I put her on there. It was a no brainer. We've had a lot of success together. I think she's an excellent rider so I put her on and she sort of turned her loose and let her run her race. She's ready to roll."

Right: Secret Compass in the paddock before the race. Jockey Rosie Napravnik said, "I was worried when I got to Gary's (Stevens) horse that he would sprint away. He did for a little bit but my filly just kept running and she was all out sticking her nose out for the win. We'll have to see if I'll be riding her in the Breeders' Cup Juvenile Fillies. I don't know where Bob is going with her, so we'll see." 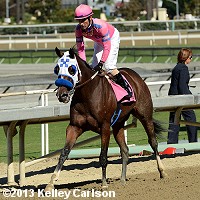 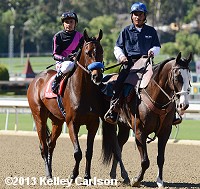 Left: Second place finisher She's a Tiger returns after the race. Jockey Gary Stevens said, "She felt great. She showed me two things today; she went to the gate quieter than she's ever been, which is a big positive in stretching out, and she proved she can rate as well. She kicked clear coming into the stretch but I was pretty empty, but she still put up a fight. When she switched to her right lead she was really laboring and I knew they were coming. I thought we might finish fourth."

Right: Third place finisher and beaten favorite Fascinating in the post parade. Jockey Rafael Bejarano said, "I had a good trip. She doesn't like the dirt in her face. She's not comfortable. We started to make a run but those two horses on the lead had too much of an advantage. It was kind of tough to catch them in the end." Trainer Bob Baffert added, "She was so far back. I was a little worried about her today because I thought she was going to be a victim of the race track. She falls so far back and then comes running, but I really think she'll move forward off of this."

The $250,000 FrontRunner Stakes (G1) features 2-year-olds going 1 1/16 miles looking for automatic entry into the Breeders' Cup Juvenile. Del Mar Futurity (G1) runner-up Dance With Fate was sent off as the 2-1 favorite in the field of 10 over 5-2 second choice Can the Man, third in the Del Mar Futurity, and 7-2 third choice Tamarando, winner of the Del Mar Futurity. 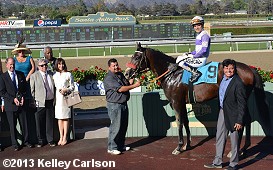 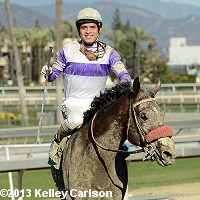 Left: Bond Holder in the winner's circle. Leandro Mora, assistant to trainer Doug O'Neill said, "We had great expectations for this horse even though he was a maiden. He ran a huge race at Del Mar and we knew we had a legitimate horse. Mario has ridden the horse every time but we told him just to let the horse alone and let him do his thing the last 1/4 mile. That's the way this horse likes to run; the last 1/4 mile."

Right: Bond Holder returns after the race. Jockey Mario Gutierrez said, "This race set up great for my horse because he likes to come from behind. He seemed to like the distance today and I think that played a major part in his win. I don't think the dirt made much of a difference because he runs everywhere; it was the distance that was the biggest factor." 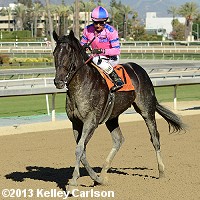 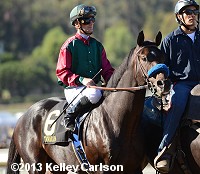 Left: Second place finisher and beaten favorite Dance With Fate returns after the race. Jockey Rafael Bejarano said, "I had a good trip. There was no problem. He broke really well. He was in position. The winner came on in the end. He was the better horse today."

Right: Third place finisher Tamarando in the post parade. Jockey Julien Leparoux said, "He moved right before they opened the gate. He put his head to the side, and we tried, but we missed the break. I tried to get closer to the pace on the first turn but I was behind two horses. If I tried to move too early I was going to be wide, too, so after that, I had to be patient and see where I could move. He ran well today."