The final Saturday of the 2014 Saratoga meeting featured four graded stakes, contested before 29,244 fans in attendance under sunny skies and temperatures in the high 70's

The highlight race on closing weekend is the $600,000 Woodward Stakes (G1). It is the major local prep for the Jockey Club Gold Cup (G1) and ultimately the Breeders' Cup Classic (G1), for older horses going 1 1/8 miles over the main track. A field of 9 faced the starter with Whitney (G1) winner Moreno sent off as the 5-2 favorite. In to challenge him included 3-1 second choice Itsmyluckyday, second in the Whitney (G1), and 7-2 third choice Zivo, winner of the Suburban (G2).

Jockey Junior Alvarado sent Moreno to the lead first time by and he set fractions of 24.01, 47.41, and 1:10.94 over the fast main track while pressed by Itsmyluckyday ansd stalked by 9-2 fourth choice Long River. Entering the lane, Moreno continued to lead through 1 mile in 1:35.53 with Itsmyluckyday drawing even with him at the 1/8 pole. The pair bumped 5 times during their duel to the line with Itsmyluckyday prevailing by 1/2 a length in 1:48.84. It was another 1 1/2 lengths back to 25-1 Prayer for Relief third. After an inquiry into the bumping through the lane the stewards allowed the result to stand.

Also on the card were the Bernard Baruch Handicap (G2) won by Wise Dan and the Prioress Stakes (G2) won by Stonetastic. 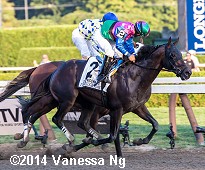 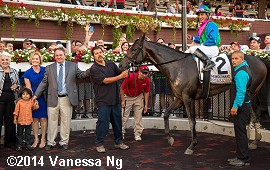 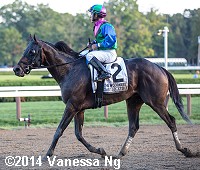 Left: Itsmyluckyday in the winner's circle. Trainer Eddie Plesa Jr. said, "It's like when you have a child that does something out of the ordinary, exceptional, that you know he could do; that's what it felt like. I mean, horses aren't your children, but we take great pride in our horses; we take great pride in our craft. He did what he needed to do in a manner nobody would dispute was spot on or that he was the best horse today. We didn't want to give Moreno a breather. We didn't want to have to depend on anybody else, and the outcome was Moreno ran a fantastic race. He just came up a little bit short today against us under different circumstances, and I think they're two great horses. It's what racing's all about. You could play this stretch drive to anybody, whether they're a racetrack fan or not, and they're going to recognize something special just happened."

Right: Itsmyluckyday returns after the race. 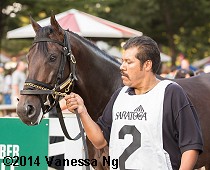 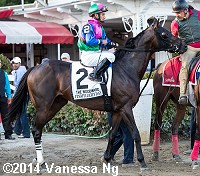 Left: Itsmyluckyday in the paddock before the race. Jockey Paco Lopez said, "My horse is a great horse. (Moreno) came over and bumped into my horse. I didn't bump that horse. Before the race Mr. Plesa said to me, 'Hey Paco, what do you think about blinkers?' The last time, the horse looked outside and inside and was looking too much. We worked him in the blinkers and I worked him twice, and he was unbelievable in the blinkers both times."

Right: Itsmyluckyday heads out to the track before the race. 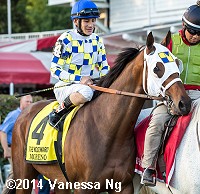 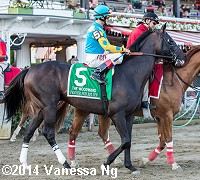 Left: Second place finisher and beaten favorite Moreno heads out to the track before the race. Jockey Junior Alvarado said, "I got bumped 4 or 5 times. My horse was running good and kept getting bumped. In the last part, he got bumped and pulled himself out of the race. I did what he likes to do; he likes to be in front. I took the lead and he was doing it nicely. Turning for home, I asked him and he was there for me. I don't know if (Itsmyluckyday) would have beat me if he hadn't touched me because we were going head-to-head down the stretch until I started getting bumped, and (Moreno) lost his action."

Right: Third place finisher Prayer for Reliefheads out for the post parade. Jockey John Velazquez said, "It was a perfect trip. I was telling my trainer (Dale Romans), we got to the 1/8 pole and I got him into the clear and he kind of hung on me a little bit. I don't know why he did that, I thought I definitely had them anytime I wanted. After galloping out, he let his air out and goes on again, so I know I had horse."

Immediately before the Woodward, a field of 9 older horses sprinted 7 furlongs over the main track in the $500,000 Forego Stakes (G1). Belmont Sprint (G3) winner Clearly Now was sent off as the 4-5 favorite. In to challenge him included 4-1 second choice Palace, winner of the Alfred Vanderbilt (G1), and 7-1 third choice Confrontation, an allowance winner last out.

Jockey Joel Rosario sent 20-1 Zee Bros to the lead exiting the chute through fractions of 22.48 and 45.23 while stalked by 12-1 Weekend Hideaway and Palace. On the turn Palace came out wide for room and took over at the 3/16 through 3/4 in 1:09.19. Kept to task by jockey Cornelio Velasquez, Palace drew off to a 3 1/2 length win over late-running Big Business in 1:21.95. It was a neck back to 10-1 Vyjack third, while favorite Clearly Now bumped at the start and never recovered, finishing 8th. 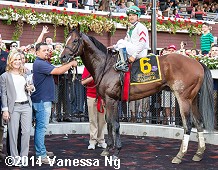 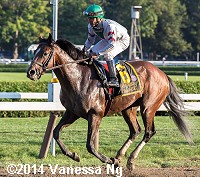 Right: Palace returns after the race. Jockey Cornelio Velasquez said, "I wanted to break good and stay in good position behind the speed. I had a lot of horse. When the opening came, I was in good position. I think my horse is the best sprinting horse now." 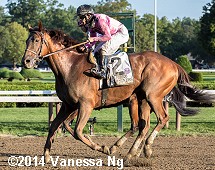 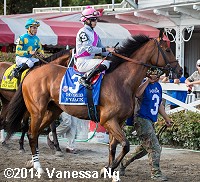 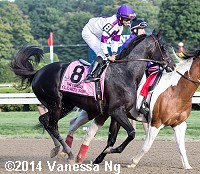 Eighth place finisher and beaten favorite Clearly Now in the post parade. Trainer Brian Lynch said, "He never got involved in the race. It looked like he was starting to make a bit of a move, but that was it. Everything seemed like it was on 'play' and the pace was cooking up front. I thought as he started to make a move that we were coming into contention, but we got [stacked] wide a little bit around the turn, and after that he stayed on that inside lead."