Kicking off the stakes at Saratoga on Saturday was the $250,000 Bernard Baruch Handicap (G2), a 1 1/16 mile Mellon turf test for older horses. Horse of the Year Wise Dan was sent off as the 4-5 favorite in the field of 9 (8 betting interests), off a 3 race winning streak of the Woodbine Mile (G1), Breeders' Cup Mile (G1), and Woodford Reserve Turf Classic (G1). In to challenge him included the 7-2 entry of Lure runner-up Bio Pro and Bowling Green (G2) fourth place finisher Boisterous, and 7-1 third choice Five Iron, 6th in the Niinsky (G2) after fifth in the Manhattan (G1). 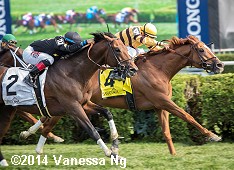 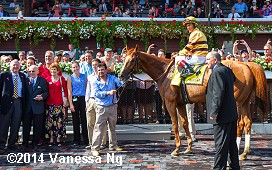 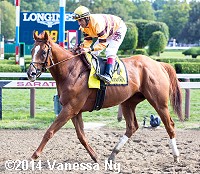 Left: Wise Dan in the winner's circle with trainer Charlie LoPresti at his hip. LoPresti said, "We wanted a good race for him to get started with. He's been through a lot. I knew he was training good and I knew he was going to run good. I wouldn't have been disappointed if he was beat today; it would have been something to build on. He showed today why he is the two-time Horse of the Year. To overcome what he's overcome ... if you'd have seen him four days after that surgery it was like he never even had surgery. That's the amazing thing about him. He'll build from this race, I have to think. God willing, he comes back good. He'll be way tougher next time." 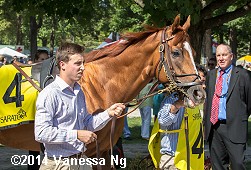 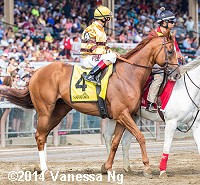 Left: Wise Dan in the paddock with trainer Charlie LoPresti on the right.

Right: Wise Dan in the post parade. Jockey John Velazquez said, "He was really tough. He showed he has the heart of a champion. He carried 127 pounds coming from a long layoff. When I got to the 1/8 pole, I didn't think I got it. When I got past the 1/16 pole he was giving me everything he had and (Optimizer) was coming from the outside. There was a little bit of doubt, he was getting tired.  I'm incredibly proud. It's incredible to have this horse coming back. What happened to him, training and come back and run with 127 pounds, that's incredible." 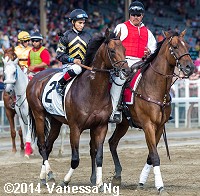 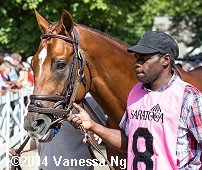 Left: Second place finisher Optimizer in the post parade. Trainer Jose Fernandez said, "I thought we had it, but it didn't quite work out that way. But that's OK. I think he's coming back to form. Hopefully, he'll do better next time. I just took good care of him, that's all. I don't know what other people do; I just know what I do. I've always loved that horse. I'm glad he's back."

Right: Third place finisher Five Iron in the paddock before the race. The 7-1 third choice set the pace under jockey Joel Rosario but could not hold off the first two, finishing third beaten 1 1/4 lengths. The Brian Lynch trainee improved his record to 5 wins, 2 seconds, and 3 thirds in 17 starts, earning $557,923 for owner-breeder Fred Allor.

The $300,000 Prioress Stakes (G2) featured a field of 8 three-year-old fillies sprinting 6 furlongs on the main track. Test (G1) and Victory Ride (G3) runner-up Miss Behaviour was the 2-1 favorite over 4-1 second choice Sweet Whiskey, second in the Acorn (G1) but fifth in the Test (G1), and 11-2 third choice Stonetastic off an allowance win at Monmouth.

Jockey Paco Lopez sent Stonetastic to the lead immediately and she set fractions of 22.27 and 44.75 while stalked by Miss Behaviour. Entering the lane, Lopez asked Stonetastic for run and she began to leave the field in her wake, finishing 8 1/2 lengths in front of Miss Behaviour in 1:08.88. It was just a neck back to 7-1 Southern Honey third. 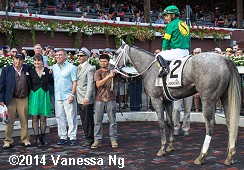 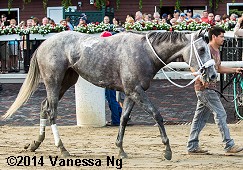 Left: Stonetastic in the winner's circle. Winning trainer Kelly Breen said, "She's fast. Paco came back and said she did it easy. I'm happy for all the connections; she ran great. Paco said he didn't whip her. I don't know what else to say, she went in 1:08 and four, and did it the right way. We're happy to be here. This is a week since my father passed away, and he's here with me. It means a lot. It's been a tough couple of weeks."

Right: Stonetastic heads back to the barn after the race. Winning jockey Paco Lopez said, "Very impressive. I know the filly has never run here, but I know that filly. I rode her last time at Monmouth. Kelly said, 'Hey Paco, when they open the gates, come away, take your position, and look where you are.' Cutting back from a longer distance to a shorter distance, I thought someone might be coming a little bit [in the stretch]. But there was no competition for this filly." 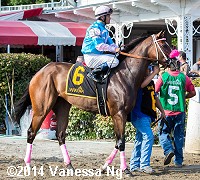 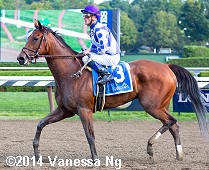 Left: Second place finisher and beaten favorite Miss Behaviour heads out to the track. Jockey Javier Castellano said, "I had a beautiful trip. That's where I wanted to be with the outside post; everything worked out perfect. Unfortunately, the winner, I don't know where she came from. I give her a lot of credit, the way she exploded at the top of the stretch. I think we were just second-best today. I think I beat the rest of the field pretty well. I'm not disappointed with my horse. She gave me a great effort. Unfortunately, it was not enough today."

Right: Third place finisher Southern Honey returns after the race. The 7-1 shot stalked the pace in third under jockey Julien Leparoux, but could not improve late finishing third beaten 8 3/4 lengths. The George Arnold trainee improved her record to 3 wins, 1 second, and 1 third in 7 starts, earning $182,017 for owner Ashbrook Farm.