There were 4 graded stakes races run over the Aqueduct main track on Saturday before the crowd of 12,514. The other Grade 1 event on Wood Memorial day is the $400,000 Carter Handicap (G1), a 7 furlong sprint for older horses, an early prep for the Breeders' Cup Sprint. A short field of just 5 (4 betting interests) went to post on Saturday, with Breeders' Cup Dirt Mile (G1) winner Caleb's Posse sent off as the 11-10 favorite off his close second in the Tom Fool Handicap (G3) last out. In to challenge him included the two-horse Godolphin entry of Emcee and Tahitian Warrior, as the joint 2-1 second choice, and 3-1 third choice Shackleford, seventh in the Donn Handicap (G1) at Gulfstream. 9-2 Jackson Bend, third in the Gulfstream Park Handicap (G2) completed the field.

Jockey Jesus Castanon sent Shackleford to the lead exiting the chute and he set fractions of 23.67 and 46.98 while pressed by Emcee and Jackson Bend. On the turn, Jackson Bend moved up to challenge, gaining a short lead into the stretch through 3/4 in 1:10.15. Caleb's Posse, last through the first 5/8 mile, closed late but just missed as Jackson Bend held him off by a nose in 1:22.32 over the fast main track. It was another 1 1/2 lengths back to Shackleford third, with the Godolphin pair bringing up the rear. 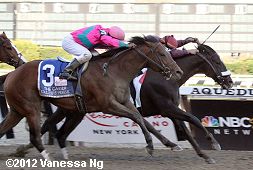 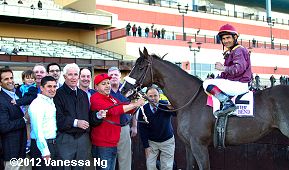 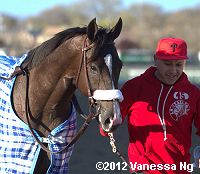 Left: Jackson Bend in the winner's circle. Trainer Nick Zito said, "As fast as Emcee is, and when he (missed the break), I was kind of happy. I said, 'Keep going now, keep going and put something on Shackleford, because we know how game Shackleford is.' You know, I was watching the race, and I basically said, 'It's your race to win now, Jack' when he got up with Shackleford. That was some thrill, I tell you. It's amazing, this business. You know, as a groom, I grew up around here, and I watched [the race] from right over there, where I used to watch it when I rubbed horses. I put my foot under a lucky spot from when I used to rub horses. It's just a great feeling. I have to thank God and thank everything."

Right: Jackson Bend heads bacl to the barns after the race. 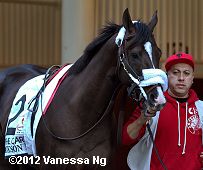 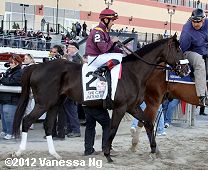 Left: Jackson Bend in the paddock.

Right: Jackson Bend heads out to the track before the race. Jockey Corey Nakatani said, "The way he was moving, I felt I'd get next to Shackleford, let Shackleford do a little of the dirty work and go, get near on the turn, and once I got around the turn I was going to see where I was at. When Caleb's Posse started coming at me, this horse has so much heart. It brings a tear to my eye. He's Mighty Mouse. He's so little, 15 hands, but he's got so much heart. This is my second home. I've always loved New York and it's great to win for Nick." 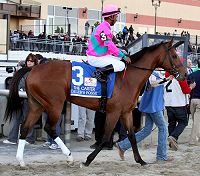 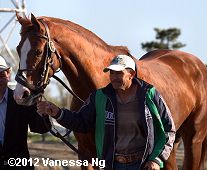 Left: Second place finisher and beaten favorite Caleb's Posse heads out for the post parade. Trainer Donnie Von Hemel said, "He came up a nose short today, so we'll have to come try him again, I guess. Most likely Met Mile. Things changed a little when Emcee broke bad, Jackson Bend kind of made a little earlier move than we did and we just couldn't get him rounded up there. That's horse racing. The horse ran well and we've giving weight to everybody, too. If weight means anything, it means a nose."

Right: Third place finisher Shackleford comes over from the barns before the race. Trainer Dale Romans said, "I thought that (Emcee) would be on the lead, and then we'd have a target, which would be better for us. The way it unfolded, he ran a nice race, they ran really fast for this racetrack today, and it looked like he was back on his game to me." 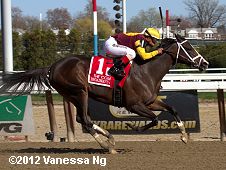 Kicking off the stakes action on Wood Memorial day was the $250,000 Comely Stakes (G3) for 3-year-old fillies going 1 mile around one turn of the main track. Broadway's Alibi, winner of her last 3 starts including the Forward Gal (G2) at Gulfstream, was sent off as the 6-5 favorite in the field of 6 over 3-2 second choice Millionreasonswhy, winner of the Wide Country Stakes at Laurel, and 4-1 third choice Welcome Guest, making her stakes debut off a maiden win.

Jockey Javier Castellano sent Broadway's Alibi to the lead immediately and she set fractions of 23.73, 47.25, and 1:11.74 over the fast track while stalked by Millionreasonswhy. Entering the stretch, Broadway's Alibi extended her lead, finishing up under wraps 3 1/2 lengths in front of Welcome Guest in 1:36.53. It was another 1 1/2 lengths back to Millionreasonswhy third. 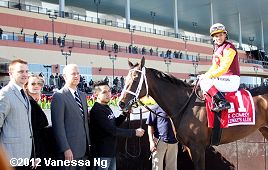 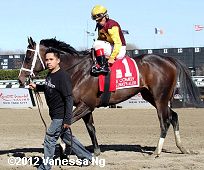 Left: Broadway's Alibi in the winner's circle. Trainer Todd Pletcher said, "I wanted to make a gradual stretch out, so we were pleased. (As for trying two turns), I don't know yet. We'll take her back to Palm Meadows tomorrow and see how she trains. She was kind enough today to step up to a mile. It's encouraging, but we'll just play it by ear and see. There are a lot of nice races like the Acorn, the Prioress, the Test, so we have to think about it a little bit."

Right: Broadway's Alibi returns after the race. Jockey Javier Castellano said, "I was the only pace-maker in the race. I wanted to do my own thing. I took advantage and broke out of the gate. If they put pressure on, there's nothing I could do. I was much the best in the field. When I asked her, she took off and did it the right way today." 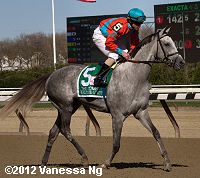 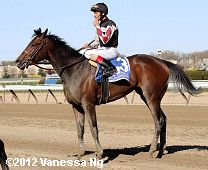 Left: Second place finisher Welcome Guest in the post parade. Trainer Chad Brown said, "Terrific effort coming off a maiden win. She acted really professional in the paddock, she warmed up beautifully, and she acted good in the race. I'm anxious to get her around two turns when I can. We've been gradually stretching her out and it's a nice progression to a one-turn mile. But I'd like to get her around two turns next time. First, we'll see how she comes out of the race, and go from there."