The major New York prep race for the Kentucky Derby is the $1 million Resorts World Casino New York City Wood Memorial Stakes (G1), contested at 1 1/8 miles, one complete circuit of the Aqueduct main track. A field of 8 three-year-olds went to post on Saturday afternoon, before a crowd of 12,514 enjoying clear skies and temperatures in the low 60's. As expected, undefeated Gemologist was sent off as the 6-5 favorite, off an allowance win at Gulfstream last out after winning the Kentucky Jockey Club (G2) at Churchill Downs. In to challenge him included 2-1 second choice Alpha, winner of the Count Fleet and the Withers (G3) both at Aqueduct, and 13-2 third choice My Adonis, second in the Gotham (G3) after finishing third in the Holy Bull (G3).

Jockey Cornelio Velasquez sent 8-1 The Lumber Guy to the lead first time past the stands and he set fractions of 23.04, 47.57, and 1:12.54 over the fast track while pressed by My Adonis, with favorie Gemologist stalking the pace in third. Entering the lane, My Adonis tired allowing Gemologist to take over the lead and he opened up a 1 1/2 length advantage over Alpha in mid-stretch through 1 mile in 1:37.74. Alpha closed well but Gemologist held him off to win by a neck in 1:50.96. It was another 3 lengths back to late-running 53-1 longest shot Teeth of the Dog third. 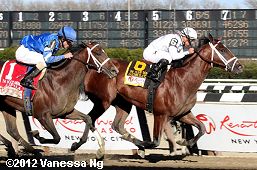 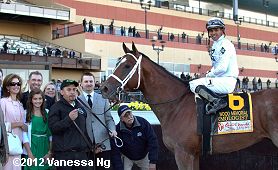 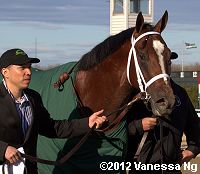 Left: Gemologist in the winner's circle. Winning trainer Todd Pletcher said, "It looked like he got the trip we wanted. Javier said he waited a little bit when he made the lead, and that he was proud of him for finding more when Alpha loomed up on him. Not only Gemologist, I thought Alpha ran a terrific race as well, overcoming a bit of traffic trouble on the first turn. So far, it would be hard to be unhappy with anything he's done so far his whole career. It was great to see. It looked like he had a little something left after the wire, so I think from a conditioning standpoint, with a good mile race and a good 1 1/8-mile race under our belt, hopefully we can have a good month of training leading up to it."

Right: The trophy presentation for the Wood Memorial. Elliott Walden of winning owner WinStar Farm said, "That's a great win, he's a great horse. This stamps him as a Derby prospect, which we're excited about. We needed the earnings today. More importantly, it puts him in our stallion barn, and that's what we look for is horses that we can bring home eventually. Winning a Grade 1 like the Wood Memorial, it's one the best races to win as a three year old so it's great that way as well." 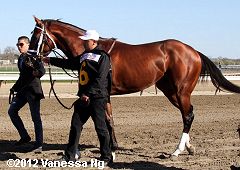 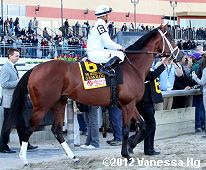 Left: Gemologist heads out for the post parade. Jockey Javier Castellano said, "It worked out great for me. He settled perfectly. I wanted a target. I didn't want to be on the lead. I had a great trip. Turning for home, he was looking around at horses. When I asked him, he took off again. I like that. I was concerned (when I saw Alpha closing) because my horse was still looking around at the crowd. When he saw the horse coming, he took off again."

Right: Gemologist in the paddock before the race. Trainer Todd Pletcher added, "Being by a dual Breeders' Cup Classic winner, one of those at Churchill Downs, and with this horse being 2-for-2 at Churchill Downs, I think he'd have as good a chance (in the Kentucky Derby) as anybody." 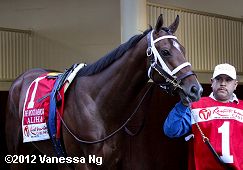 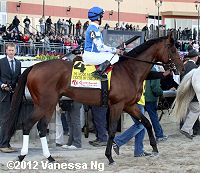 Left: Second place finisher Alpha heads out for the post parade. Trainer Kiaran McLaughlin said, "We had a true test and we passed our test, we just didn't win. He was very good in the gate, he got checked into the first turn hard, but he still ran great with a little traffic and took the dirt well. He wasn't out three wide in the clear, and he was running against quality horses and ran very well. So, we'll make sure with Simon Crisford (Godolphin Racing Manager) that we're going on to May 5, but that's what we intend to do and we've got the earnings now."

Right: Third place finisher Teeth of the Dog heads out for the post parade. Joss Saville, assistant to trainer Michael Matz said, "We talked about it beforehand and felt there were a few that would go on (to the lead). If he made the front, fine, but he didn't have to. He got bumped there on the first turn and got pushed back a bit. He's a very nice horse and next race will be better. I was disappointed he got bumped. When I saw him going down the backside, he was making a nice move, and I was happy." 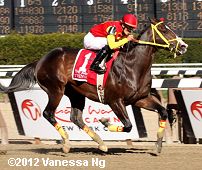 The $250,000 Bay Shore Stakes (G3) featured a field of eight 3-year-olds sprinting 7 furlongs on the main track. Swale Stakes (G3) winner Trinniberg was sent off as the 6-5 favorite over 7-5 second choice Hardened Wildcat, winner of the Fred Capossela last out, and 7-1 third choice How Do I Win, off a third place finish in the Capossela after finishing fourth in the Withers (G3).

Jockey Willie Martinez sent Trinniberg to the lead exiting the chute and he set fractions of 23.46 and 47.41 while 1 1/2 lengths in front of How Do I Win and 15-1 King and Crusader down the backstretch. On the turn, Trinniberg extended his lead, opening up by 3 lengths midstretch through 3/4 in 1:11.50, and cruised past the past 3 lengths in front of Hardened Wildcat in 1:23.46 over the fast track. It was a long 5 1/2 lengths back to How Do I Win third. 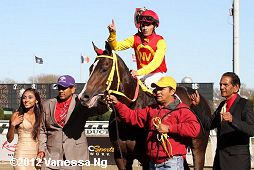 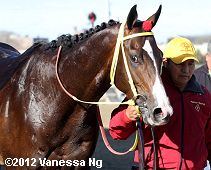 Left: Trinniberg heads to the winner's circle with his happy connections. Winning owner Shivananda Parbhoo said, "The performance was amazing. I knew he would go to the lead. He's the class of the race. (Jockey Willie Martinez) didn't even use him at all. The plans are the Preakness, but let me see how good he comes out. There's a 15% chance for the Kentucky Derby. I want to go long. I wanted to (run him in the Wood Memorial), but I don't think he was ready. I wanted to go to the (Louisiana Derby), but I canceled 15 minutes before the race. Me and my pops (trainer Bisnath Parboo) are an amazing team."

Right: Trinniberg heads to the barns after the race. Jockey Willie Martinez said, You should never be too confident going into a race. It's horse racing – anything can happen – but I was overwhelmed with confidence. Once I cleared the chute I knew it was all over. I was just trying to be the passenger. He's the pilot." 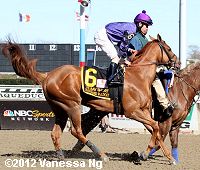 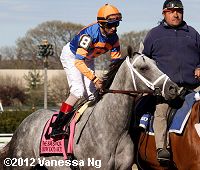 Left: Second place finisher Hardened Wildcat in the post parade. Jockey Junior Alvarado said, "I had a perfect trip for him. He was where he likes to be, settled back, very relaxed. When I picked it up, my horse really took off and finished really strong, but the speed's been holding. The horse who won the race won it pretty easy. I'm really impressed with my horse; he was the only one coming from behind. Today horses haven't been coming from behind. I thought there might be a little more speed, but my horse doesn't have speed and I didn't want to squeeze him the first part or else he wouldn't finish."

Right: Third place finisher How Do I Win in the post parade. The 7-1 third choice stalked the pace 1 1/2 lengths back early under jockey John Velazquez, but could not improve late finishing third beaten 8 1/2 lengths. The Todd Pletcher trainee improved his record to 2 wins, 0 seconds, and 3 thirds in 9 starts, earning $103,500 for owner Mike Repole (Repole Stable).

On to the Carter Handicap and Comely Stakes also on the card.