There were 4 graded stakes races run over the Aqueduct main track on Saturday before the crowd of 12,144. The other Grade 1 event on Wood Memorial day is the $250,000 Carter Handicap (G1), a 7 furlong sprint for older horses, an early prep for the Breeders' Cup Sprint. A field of 8 went to post under sunny skies, with Apriority sent off as the 7-5 favorite off an allowance win at Gulfstream on March 5 after finishing a close second in the Sunshine Millions Sprint in January. In to challenge him included Breeders' Cup Dirt Mile runner-up Morning Line at 2-1, second in the Donn Handicap (G1) last out, and 5-1 third choice Kensei, off a second place finish in the Santana Mile at Santa Anita and winless since the 2009 Jim Dandy (G2) at Saratoga. 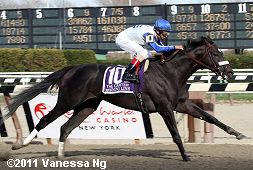 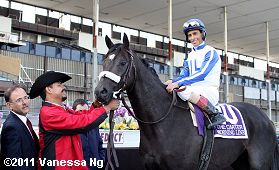 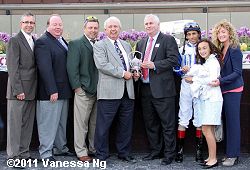 Morning Line in the winner's circle. Winning trainer Nick Zito said "Amazing. I'm very grateful. I'm very happy for the horse. He's lost some tough ones - the Breeders' Cup Dirt Mile was a heartbreaker. The Donn was a heartbreaker. He's such a well-deserving Grade 1 horse. He beat a top horse in Apriority. It was a great run race. He did what a professional horse is supposed to do. He's just a very versatile horse. He'll probably run any distance."

Right: The trophy presentation for the Carter Handicap. 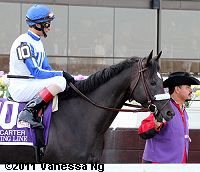 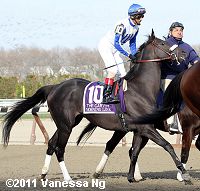 Left: Morning Line heads out to the track before the race.

Right: Morning Line in the post parade. Winning jockey John Velazquez said, "I had a very good trip. Everything went pretty much the way we hoped it would. He has hard time getting around the turns, but once he's down in the lane, he'll give you another gear. He finished up very well." 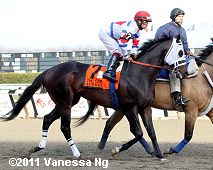 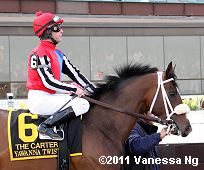 Left: Second place finisher and beaten favorite Apriority in the post parade. His trainer David Fawkes said, "He ran huge - he chased the speed and did a lot of work early. I'm happy with his performance, just disappointed we didn't win." Jockey Luis Saez added, "He ran hard. I had a good trip."

Right: Third place finisher Yawanna Twist heads out to the track before the race. The 9-1 fifth choice sat fourth 4 1/2 lengths back early while saving ground on the turn under jockey Mike Luzzi, then passed tired horses to get third beaten 2 3/4 lengths at the line. The Richard Dutrow trainee improved his record to 3 wins, 3 seconds and 1 third in 8 starts, earning $319,400 for owner-breeder Steel Your Face Stables LLC. 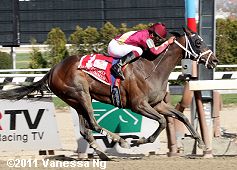 Kicking off the stakes action on Wood Memorial day was the $150,000 Comely Stakes (G3) for 3-year-old fillies going 1 mile around one turn of the main track. Ava K., undefeated in 3 starts including the Proud Puppy Stakes last out, was sent off as the 7-5 favorite in the field of 7 over 2-1 second choice Her Smile, third in the Suncoast Stakes at Tampa Bay Downs, and 9-2 third choice Royal Sighting, off her maiden win in her fifth try.

7-1 fifth choice R Holiday Mood went to the front under jockey John Velazquez and she set fractions of 23.10 and 46.00 while being stalked by 32-1 Mysterious Chimes. Entering the stretch, the pacesetters both tired allowing 6-1 fourth choice Hot Summer, who sat just off the pace, came through on the inside to take over the lead at the 1/4 pole through 6f in 1:10.09, opening up by 1 1/2 lengths at the 1/8 pole. Her Smile put in a late rally from fifth but Hot Summer drew off through the stretch to win by 2 1/4 lengths in 1:35.58. It was another 2 lengths back to favorite Ava K. third. 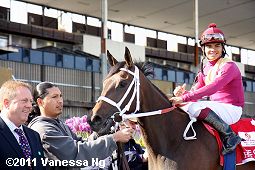 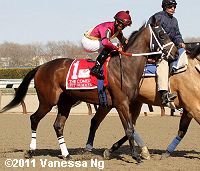 Left: Hot Summer in the winner's circle. Winning trainer David Fawkes said, "I didn't think (the rail would open). I didn't think she would get through there. (Last time) she stumbled a little bit and was rushed a little bit, and that isn't her. We've been working hard with her to sit off the pace, and it worked out. We'll talk to Mr. (owner Harold) Queen and try to make a plan. I think she's going to stay here. We'll find something."

Right: Hot Summer in the post parade. Winning jockey Luis Saez said, "(I saw on paper) that she's got speed. When she got to the gate, she wanted to go, but I got hold of her. At the 3/8 pole, I waited for the hole to open, and she responded. This is my first time riding here. I like it." 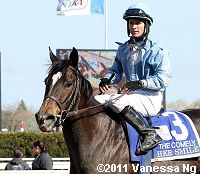 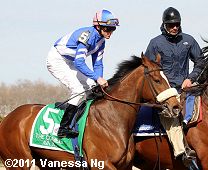 Left: Second place finisher Her Smile returns after the race. The 2-1 second choice settled in fifth 3 lengths behind early under jockey David Cohen, was forced wide into the stretch but closed well to get second beaten 2 1/4 lengths. The Leigh Delacour trainee improved her record to 3 wins, 2 seconds, and 1 third in 7 starts, earning $126,360 for owner-breeder William M. Backer.

Right: Third place finisher and beaten favorite Seniors Pride in the post parade. The 7-5 favorite bobbled after being bumped at the start, stalked the leaders 2 lengths back under jockey Ramon Dominguez, then finished willingly to get third beaten 4 1/4 lengths. The Michael Hushion trainee improved her record to 3 wins, 0 seconds, and 1 third in 4 starts, earning $97,800 for owner-breeder H. Lewis Rapaport and Sugar Maple Farm.