The major New York prep race for the Kentucky Derby is the $1 million Resorts World New York Casino Wood Memorial Stakes (G1), contested at 1 1/8 miles, one complete circuit of the Aqueduct main track. A field of 9 three-year-olds went to post on Saturday afternoon, before a crowd of 12,144 enjoying clear skies and temperatures in the upper 40's. As expected, undefeated juvenile champion Uncle Mo was sent off as the 1-10 favorite, off his win in the Timely Writer Stakes at Gulfstream Park. In to challenge him included 8-1 second choice Toby's Corner, winner of the Whirlaway before finishing third in the Gotham (G3), and 20-1 third choice Arthur's Tale, an allowance winner last out after finishing fourth in the Whirlaway.

Jockey John Velazquez sent Uncle Mo to the lead first time past the stands and he set easy fractions of 23.49, 47.98, and 1:12.28 while being pressed by 27-1 Duca to his outside. Entering the stretch as Duca tired and dropped to last, Velazquez asked Uncle Mo to open up and he did, pulling away to a 1 1/2 length lead over the rest of the field. However, Arthur's Tale, 5th early, rallied down the center of the track to gain a short lead on Uncle Mo at the 1/16 pole, and then Toby's Corner, from 6th, came through between Arthur's Tale on the outside and Uncle Mo on the rail to pull the upset by a neck in 1:49.93 over the fast track. It was another length back to Uncle Mo third. 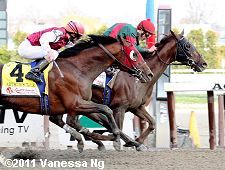 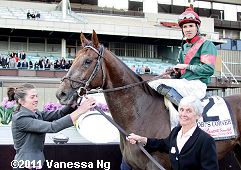 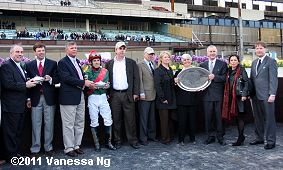 Left: Toby's Corner in the winner's circle with owner Dianne Cotter. Cotter said, "I was very surprised, but there's always hope. His daddy (Bellamy Road), who we also bred, won much more impressively. We weren't at the race when Bellamy Road ran, but we certainly watched it at home. It was such a wonderful day. To think this could happen - I can't stop laughing. It's just such a wonderful feeling. Graham did such a wonderful job, and Eddie rode him just perfectly today. It's just been heaven."

Right: The trophy presentation for the Wood Memorial with winning trainer Graham Motion 2nd from the left. Winning jockey Eddie Castro said, "I wasn't surprised. He's a really nice horse. I really like this horse. I rode him comfortably. I kept him in the rear. Once we got some room, he took off." 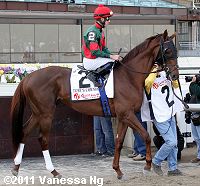 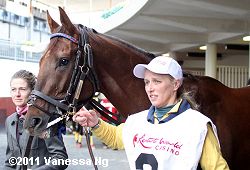 Left: Toby's Corner heads out for the post parade.

Right: Toby's Corner in the paddock before the race. Winning trainer Graham Motion said, "At the 1/8 pole, he kind of re-broke, and Eddie just said he had a great trip on the rail. We always felt the 1 1/8 was going to be a big factor for this horse. I was worried (adding blinkers) was going to make him keen, and he was actually more relaxed with them on. I've never had a horse respond like that to them. We had never talked about (The Derby). The Cotters never mentioned it to me and I don't think (Mrs. Cotter) even knew I'd nominated him early on. It's pretty neat. We're going, as long as he's doing fine. It looks like the 1 1/4 mile won't be a problem and it's very wide open now. It's obviously a very wide open group and I kind of think he ranks right up there with the top ones." 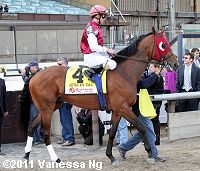 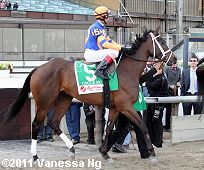 Left: Second place finisher Arthur's Tale heads out for the post parade. His trainer Tom Albertrani said, "It looked like he got in a little trouble, but in saying that he still ran a huge race and it looked like he ran on at the end. It looks like he's starting to get his act together now and maybe he's just a late bloomer. I'll talk to the Sheikh (Mohammed, owner) and we'll make some decisions this week. A lot depends on earnings, I guess. We always thought he was a Belmont horse - he looks like a horse who wants to go long and he galloped out way ahead today. We were kind of using this as a steppingstone to keep him on a schedule, but now we may be thinking differently."

Right: Third place finisher and beaten favorite Uncle Mo heads out for the post parade. His owner Mike Repole said, I have total faith in Johnny and total faith in Todd, and the horse didn't fire today. In 1973 Secretariat came in third in the Wood, and he won the Triple Crown. I saw "Secretariat" (movie) last night; it was probably a stupid idea. Maybe he has an abscess on his tooth. I'm going to check it later." 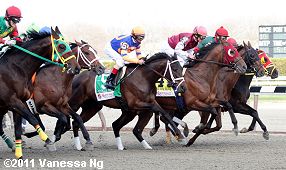 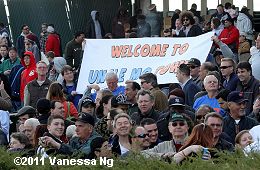 Left: Shortly after the start of the Wood Memorial with Uncle Mo the center. His trainer Todd Pletcher said, "He grabbed a quarter (left front) leaving the gate. It didn't help but I'm not using that as an excuse. After that, he was kind of hounded early on. The fractions were reasonable. It was his first time going 1 1/8, first time over the Aqueduct surface. I was a little concerned turning for home at the 3/16 pole when he didn't really kick clear. You could see the last 50 to 60 yards he was tired. It doesn't mean we're not going to go, it doesn't mean we are going to go. We'll see how he comes out of it and make sure he's physically OK, that's a priority. My confidence hasn't changed in the horse. He's got a good win at Churchill and maybe this is what he needed to step forward 4 weeks from now."

Right: Uncle Mo had lots of fans at Aqueduct. 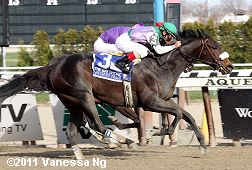 The $200,000 Bay Shore Stakes (G3) featured a field of seven 3-year-olds sprinting 7 furlongs on the main track. J J's Lucky Train was sent off as the 2-1 favorite off his win in the Miracle Wood Stakes at Laurel, over 5-2 second choice Vengeful Wildcat, third in the Fred Capossela last out, and 5-1 third choice Justin Phillip, 8th in the Risen Star (G2) at Fair Grounds.

8-1 Smoke It Right battled for the lead with Vengeful Wildcat down the backstretch and around the turn through fractions of 22.64 and 46.17, with Justin Phillip and 6-1 Royal Currier stalking them third and fourth. Into the stretch, Vengeful Wildcat opened up a short lead through 3/4 in 1:09.98, but J J's Lucky Train, fifth early, rallied the length of the stretch to get up by a neck in 1:22.54. It was another 1 1/2 lengths back to Justin Phillip third. 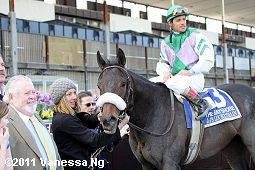 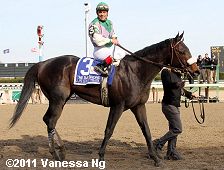 Left: J J's Lucky Train in the winner's circle. Winning trainer Bill Anderson said, "Down the backside I was in cardiac arrest with all that trouble from the start. It looked like he was hanging a little in midstretch, and I didn't think we'd get there. We know he always tries. I think at 7/8 to a mile it'd take a heck of a horse to outrun him, and that's where we'll probably stay with him."

Right: J J's Lucky Train after the race. Winning jockey Jose Ferrer said, "On the backside, I was happy with where I was. With him, the more you grab, the more he goes. I was trying to give and take, keep him relaxed and comfortable. I wanted to wait, and teach him how to rate to make sure he finishes. Everyone has done a fantastic job with this horse." 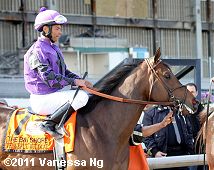 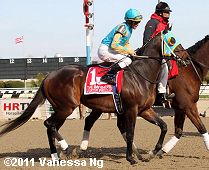 Left: Second place finisher Vengeful Wildcat heads out for the post parade. The 5-2 second choice battled for the lead under jockey Carlos Marquez Jr., took command at the 3/16 pole but was unable to hold off the winner. The Ben Perkins Jr. trainee improved his record to 2 wins, 2 seconds, and 1 third in 5 starts, earning $172,750 for owner-breeder New Farm.

Right: Third place finisher Justin Phillip in the post parade. The 5-1 third choice tracked the leaders in third early under jockey Ramon Dominguez, but could not improve position late to finish third beaten 1 3/4 lengths. The Steve Asmussen trainee improved his record to 2 wins, 1 second, and 3 thirds in 8 starts, earning $96,528 for owner Zayat Stables.

On to the Carter Handicap and Comely Stakes also on the card.