The on-track crowd of 7,848 on Wood Memorial day were also treated to three stakes events for the older divisions. The most important of these is the $300,000 Carter Handicap (G1), a 7 furlong sprint on the main track. A contentious field of six went to the gate in this event, with Deputy Minister Stakes winner Keyed Entry sent off as the slight 2-1 favorite over 22-10 second choice Latent Heat, winner of the San Carlos and the Malibu, and 5-2 third choice Silver Wagon, winner of the General George Breeders Cup Handicap at Laurel in his last start.

Latent Heat led the pack down the backstretch through quick fractions of 21.76 and 44.34, with Keyed Entry to his outside and 52-1 longest shot Kazoo on the rail to his inside. Rounding the far turn, Latent Heat continued to lead as Kazoo dropped out of contention. With 3/16 to run, favorite Keyed Entry tired and faded to an eventual 5th place finish, but Silver Wagon had just hit his best stride after racing in fifth early. Through the stretch, Silver Wagon closed well down the center of the track and ran right by the tiring pacesetter to win going away by 1 1/4 lengths over late-running 7-1 Diabolical in 1:21.46. Another closer, 9-1 Ah Day, finished 3/4 length back in third, and he was 3/4 length ahead of pacesetting Latent Heat in fourth. 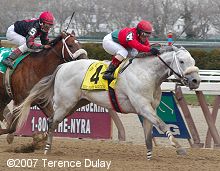 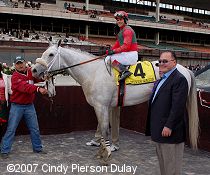 Silver Wagon in the winner's circle. Winning trainer Richard Dutrow Jr. said, "You've seen the last three times he's run on this track; his last three seven-eighths races have been huge. I had a lot of confidence that he was going to run a big race. He's been training lights-out since we got back from Florida. Down there, he didn't want to train. As soon as I get him back here, he runs to the track. I just can't figure it out. Without a doubt, we're pointing to the Met Mile. There's plenty of time. A mile around one turn he can get. It's all good. It's great having these guys send me these horses, especially after losing Silver Train." 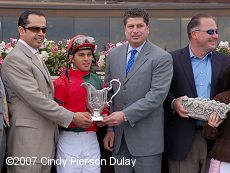 Trophy presentation for the Carter Handicap. Winning jockey Javier Castellano said, "(The fast) pace worked out really good. They went very, very fast. It was a key to the race, because it set up perfectly for me. Cornelio (Velasquez aboard Diabolical) and I hooked up together at the 1/8 pole, and my horse finished good. It's a great feeling when you're turning for home and you ask your horse for run and he responds and finishes good. 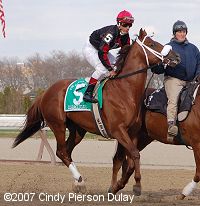 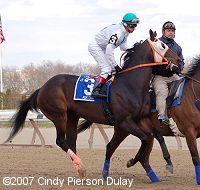 Left: Second place finisher Diabolical in the post parade. His trainer Steve Klesaris said, "He ran great. There is no other way to look at it. He tries, this colt, he's very, very honest. I don't know what we'll do next." Jockey Cornelio Velasquez added, "The horse was very good down the stretch. I looked outside and saw Javier (Castellano) coming. My horse dug in, but was just not good enough today." 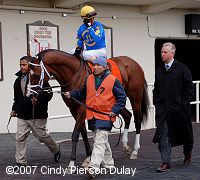 Beaten favorite and fifth place finisher Keyed Entry in the paddock before the race with trainer Todd Pletcher on the right. Pletcher said, "He really had no excuse. He simply flattened out. Johnny (Velazquez) said he felt good, but when he called on him, he just didn't have anything." 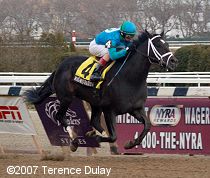 The last stakes race of the afternoon was the $200,000 Excelsior Breeders' Cup Handicap (G3) at 1 1/8 miles on the main track. 4-5 favorite Corinthian reared up at the start and was slow to get into stride, spotting the field 12 lengths at the start as 9-1 Accountforthegold took the lead right away. Accountforthegold was allowed an uncontested lead of as many as 3 1/2 lengths while setting fractions of 23.78, 46.62, and 1:10.34. On the far turn, 5-2 second choice Magna Graduate, who raced in third early, came out wide and put in his bid for the lead. Magna Graduate collared the pacesetter inside the 3/16 pole and drew away late to win by 3 3/4 lengths in 1:48.10. 22-1 longest shot Naughty New Yorker rallied late to get up by a neck, taking second from Accountforthegold in the final strides. It was just a neck back to 8-1 Evening Attire in fourth.
Results Chart from DRF. 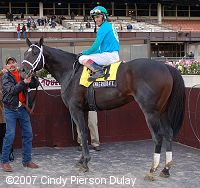 Magna Graduate in the winner's circle. Winning trainer Todd Pletcher of Magna Graduate said, "We obviously caught a fortunate break with Corinthian getting left at the gate. To Magna Graduate's credit, he has really learned to relax with the blinkers. This was a big race for him. We'll see where he goes. We'll try to give him four or five weeks."

Winning jockey John Velazquez said, "At the start, Corinthian should have been right next to me, so I knew right away that something happened. But I didn't worry about it. I worried about the horse in front (Accountforthegold). Magna Graduate ran pretty easy today. The way my horse was moving at the three-eighths pole, I was confident. And when Magna Graduate made the lead, he was waiting, looking around at the cameras and everything and I said, `Don't do anything.' I showed him the whip, but I didn't want to hit him because he won so easily." 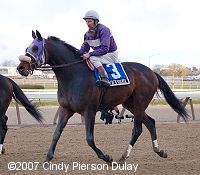 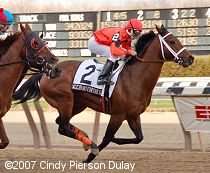 Right: Third place finisher Accountforthegold leads the way right after the start of the race. 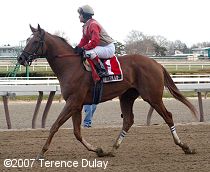 Beaten favorite and 5th place finisher Corinthian returns after the race. His jockey Javier Castellano said, "It's just unbelievable. He was so good today in the paddock and in the gate. Today, everything was beautiful. As soon as they opened the gate, boom! He just broke in the air. I don't even know how I stayed on." 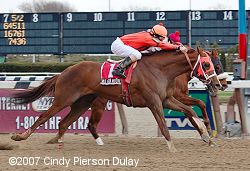 Kicking off the stakes action on Wood day was the $75,000 Pleasant Colony Stakes at marathon distance of 1 3/4 miles on the main track. 5-2 second choice Monopoly Pricing controlled the pace saving ground around all three turns through fractions of 49.93, 1:15.61, 1:41.73, 2:07.38, and 2:32.97, while being stalked by 2-5 entrymates Successful Affair and Malibu Moonshine. Entering the stretch, Malibu Moonshine advanced three wide to draw even with the pacesetter, and the pair battled through the final furlong with Malibu Moonshine digging in late to get the win by a neck in 2:57.54. It was 2 1/2 lengths back to Successful Affair in third, who was 14 lengths clear of the balance of the field.
Results Chart from DRF. 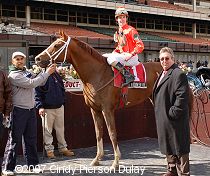 Malibu Moonshine in the winner's circle after the Pleasant Colony Stakes with trainer Gary Contessa on the right.