The $750,000 Wood Memorial (G1) at Aqueduct Racetrack in New York is one of the traditional final prep races for the Kentucky Derby and the Triple Crown. In the 83th renewal of this 1 1/8 mile trip around both turns of the main track, before an on-track crowd of 7,848, a field of six 3-year-olds went to the gate with Remsen and Holy Bull winner Nobiz Like Shobiz sent off as the 7-10 favorite despite finishing third in the Fountain of Youth at Gulfstream last time out. Also in the field were 3-2 second choice Any Given Saturday from the powerful Todd Pletcher barn, coming off a nose defeat in the Tampa Bay Derby in his last start, and 8-1 third choice and local hope Summer Doldrums, winner of the Whirlaway and then third in the Gotham last time out, both races run at Aqueduct.

When the field got underway, a three-horse battle ensued up front with 44-1 Flashstorm leading the first quarter in a quick 22.28 with favorite Nobiz Like Shobiz saving ground on the rail and Summer Doldrums flanking him to his outside, wide around the clubhouse turn. Down the backstretch, Summer Doldrums took over the lead, getting the half in 47.26 as the three continued to contest the pace. On the far turn, Any Given Saturday, who had stalked the pace in fourth the whole way, moved up on the leaders and drew even with Nobiz Like Shobiz with 3 furlongs to run, as Summer Doldrums tired and dropped from contention. However, when asked by jockey Cornelio Velasquez, Nobiz Like Shobiz surged ahead, putting away Summer Doldrums in mid-stretch and was all-out late to hold off the late move of 18-1 Sightseeing to win by just 1/2 a length in 1:49.46 over the fast track. It was a long 3 1/4 lengths back to Any Given Saturday in third, who was 4 3/4 lengths clear of Summer Doldrums in fourth. 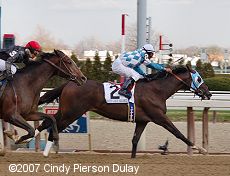 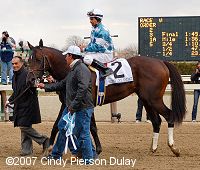 Nobiz Like Shobiz returns after the winning the Wood. Winning jockey Cornelio Velasquez said, "My horse broke sharp. He really wanted to go. Breaking inside, I tried to get him to relax. He was just pulling me the whole time. I liked that he really finished good. He wasn't really coming in today. He really ran straight today. He ran very good with (blinkers on). He's a very nice horse. I think he's got a very good chance in the Derby." 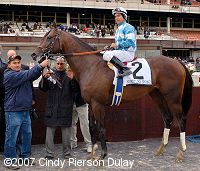 Nobiz Like Shobiz in the winner's circle. Winning trainer Barclay Tagg said, "I think he was more focused today. He did everything properly. (Jockey Cornelio Velasquez) throttled him back a little bit. I'm glad that he did; I didn't want him to get into a duel. He didn't gallop away by ten, but he had a pretty well bred horse chasing him. He'll be fine now. I never get overly confident about anything. So many things can happen in a race. I had a pretty good feeling about him today. I thought he would do what he did and I would have been really disappointed if he didn't." 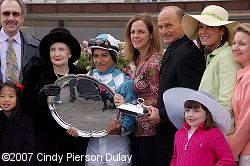 The trophy presentation for the Wood Memorial. Owner Elizabeth Valando is in black on the left and trainer Barclay Tagg is between the two ladies on the right. Asked what his plans are for Derby week, Tagg added, "I like to go late to the Derby. I don't like to go down and mess around with that crowd. It's hard on the horses to be chased around all day, every day. 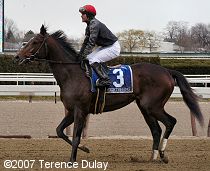 Second place finisher Sightseeing returns after the race. His trainer Shug McGaughey said, "I thought we would probably run good. I still think this horse has a way's to go. He's got some things to learn. I'll talk to the Phipps and figure things out, but if you ask me about the Kentucky Derby now, I would be inclined to say No. Hopefully, we can have a good horse for later on this summer. At the quarter-pole, it looked like he was a winner. He drifted out a little bit. I'm tickled to death with the effort. I've always been a Nobiz Like Shobiz fan. My hat's off to him. He ran a great race." 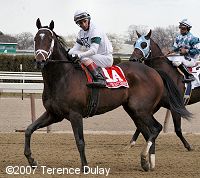 Third place finisher Any Given Saturday returns after the race. His trainer Todd Pletcher said, "I was disappointed in the last 1/16. He didn't really polish it off. He obviously took the worst of it being wide on the first turn and being three-wide all the way around on the second turn. No real excuse, other than just running the longest. I still believe (Any Given Saturday) is a good horse. He should have got enough earnings to secure a position in the Kentucky Derby." Jockey John Velazquez added, "He stumbled a little out of the gate. He just acted different today. Halfway around the first turn, I was able to drop behind the horses and save a little ground. He had a lot to do, getting pushed out on the first turn. I had to go sooner than I wanted to at the half-mile pole to get up with him. He ran a really hard race at Tampa. With his trip today, it was just a lot to ask." 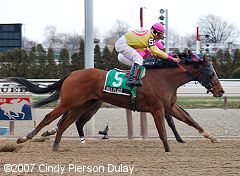 The $150,000 Bay Shore Stakes (G3) on the Wood Memorial undercard also featured the 3-year-old division, with a field of six sprinting 7 furlongs on the main track. Undefeated Les Grands Trois shipped in from California for trainer Bobby Frankel, making his stakes debut and sent off as the 3-5 favorite over 5-2 second choice Bill Place, winner of the Jimmy Winkfield and second in the Fred Capossela in his last start.

10-1 Pass the Punch battled with 8-1 Wollaston Bay exiting the chute through a quarter in 21.76. Midway down the backstretch, 34-1 longest shot Indian Camp, who had stalked them in third, poked a head in front through a half in 44.35 before tiring and dropping from contention. Entering the stretch, 13-1 Hobbitontherocks came out four wide and gained a short lead with a furlong to go, through 3/4 in 1:09.76. However, Bill Place, who was bumped at the start and raced at the back of the field early, closed well after taking the turn wide, and got up in the final strides to win by a neck in 1:22:99. It was 2 1/4 lengths back to favorite Le Grands Trois in third.
Results Chart from DRF. 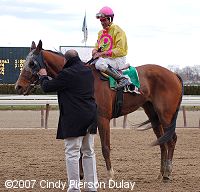 Bill Place returns after winning the Bay Shore. Winning trainer Anthony Dutrow Jr. said, "He ran great. Things really didn't go his way, but he showed a lot of heart and courage. He finished up really well. I missed a work with him and the other morning I told the rider to go six furlongs with him and he only went five-eighths. This horse has managed to overcome. My friend Mark Reid always tells me I'm not as good a trainer as Bobby Frankel, Todd Pletcher, or even my brother, so it was great to feel like those guys on a big day. I think between six and seven furlongs is his ideal distance, but what do I know?" 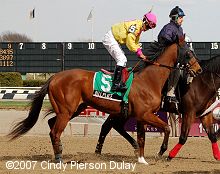 Bill Place in the post parade. Winning jockey Cornelio Velasquez said, "He broke a little slow. The outside horse bumped my horse and the favorite, too. I just took him back. At the three-eighths pole I asked him and I had a lot of horse. He ran good." 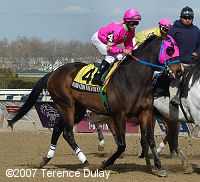 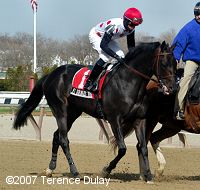 Right: Third place finisher Les Grande Trois in the post parade. David Flores, jockey of beaten favorite and third-place finisher Les Grand Trois said, "I got squeezed coming out of the gate, but after that, me and the winner were right together down the backside. I got through perfect, he just got a little bit flat in the end. No excuse."