There were two stakes races on the Wood Memorial undercard Saturday afternoon at Aqueduct, the Carter Handicap for the older sprinter and the Bay Shore Stakes for the 3-year-old sprinters. The $150,000 Bay Shore Stakes (G3) featured five 3-year-olds going 7 furlongs over the sloppy main track. Trainer Bob Baffert shipped Too Much Bling in from California and the San Vicente winner was sent off as the even-money favorite over 3-2 second choice Songster, a maiden winner coming off a second place finish in an allowance last out.

8-1 shot One Way Flight came out of the gate aggressively and got the initial quarter in 22.54 with Songster giving chase. However, Garrett Gomez aboard Too Much Bling stayed out of traffic three wide and easily guided his mount to the lead on the midpoint of the turn. Under a hand ride, Too Much Bling proved too much for the field as he powered away through the stretch to a 9 length win over Songster in a time of 1:22.40 for the 7 furlong sprint over the slop. It was just 3/4 length back to One Way Flight in third. This was the second year in a row the race was won by a California invader, with 2005 champion sprinter Lost in the Fog winning last year.
Results Chart from DRF. 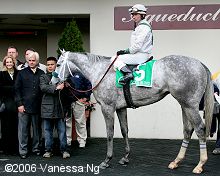 Too Much Bling in the winner's circle. Winning trainer Bob Baffert (left side of photo) said, "Garret (Gomez) has really gotten this horse to relax. The track is playing pretty even. Last year, he went from Ohio to Saratoga and he just wasn't used to the operation. When we got him back to California, we got him going good. He was just so keen, he would run off. A lot of it has been maturity. We're just glad he's a fast son of a gun. We'll keep him at one-turn races for now."

Winning jockey Garrett Gomez said, "He ran really well. One of the keys is trying to get him to shut down early in the race. I actually thought at the half-mile pole that he was getting a little eager. When I turned for home, I smooched to him and sent him on his way. He's got a mind of his own. He's got phenomenal speed. If he can keep that bottled up and enjoy himself, he's 10 times better."

Jockey Jose Santos hustled 8-1 shot Bishop Court Hill to a clear lead out of the gate, setting a brisk pace of 22.13 and 44.95 while 1 1/2 lengths clear of the pack. Mass Media stalked the pace in third along the inside. Garrett Gomez aboard Sir Greeley took a wide path around the turn after rating in fourth and made a bid for the lead. However, the pacesetting Bishop Court Hill dug in late and held off the late closing Sir Greeley to win from gate to wire by just a neck in a time of 1:23.27. It was 3/4 length back to 8.5-1 longest shot Big Apple Daddy in third, while favorite Mass Media tired in the stretch to finish fourth.
Results Chart from DRF. 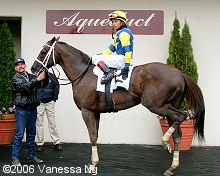 Bishop Court Hill doesn't seem very happy to be in the winner's circle. Winning trainer Todd Pletcher said, "It was a big race for him. He's a horse that has always had a great deal of talent, and it has been a little frustrating from time to time. It was good to see him dig in gamely today and hold on for the win. We'll keep him sprinting at 6 and 7 furlongs."

Winning jockey Jose Santos said, "The track is perfect for these kinds of horses. I just let him come out of there. He had great speed. He was a better horse today. The last sixteenth of a mile, he saw the other horses coming and he gave an extra effort. He was huge today." 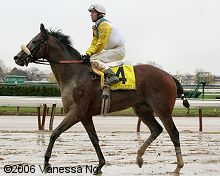 Second place finisher Sir Greeley after the end of the race. His jockey Garrett Gomez said, "He didn't break very well. I was never really happy where I was at all the way around the track. At the 3/8 pole, I finally got him moving a little bit and turning for home, I thought I was a winner. But I just couldn't get by the winner. He ran a good race overall. He was put in a predicament he was not used to being in. He had a lot of dirt kicked in his face, so he actually ran a pretty good race considering. " 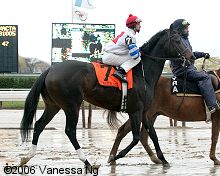 Third place finisher Big Apple Daddy in the post parade. His trainer Bruce Levine said, "He ran a huge race. He might have hung just a hair late. I thought he would run good, but you can never be sure stepping up into a Grade 1. It's hard to come so close and not get it. I thought there might be more pace. I don't know what we'll do next." 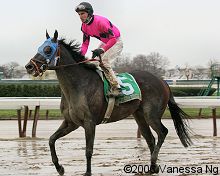 Beaten favorite and fourth place finisher Mass Media returns after the race. His jockey Ramon Dominguez said, "I thought he was in a good spot. He just didn't seem to handle the surface in the last part of the race. That's the only thing I can come up with. He was doing fine until the quarter-pole and he just flattened out."